By NewsroomAugust 31, 2021Anti-poaching
No Comments 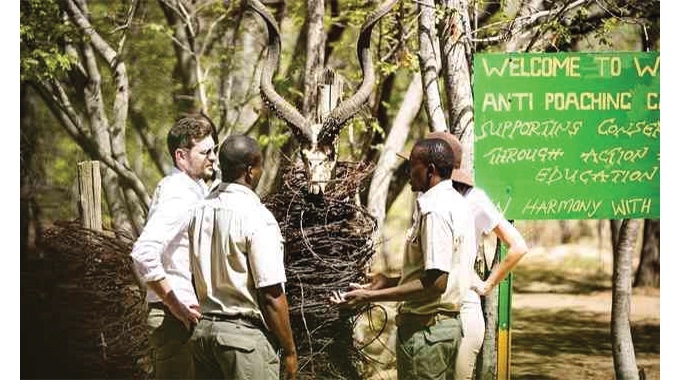 A partnership at Hwange has forestalled poaching activity. Image: As originally published by The Chronicle.

The Zimbabwe Parks and Wildlife Management Authority (ZimParks)  has recorded no cases of poaching of elephants at Hwange National Park since last year, thanks to improved conservation efforts as a result of partnership with other organisations.

In 2013, more than 120 elephants were killed through cyanide poisoning on the southern side of the country’s biggest game park near Tsholotsho.

Poachers took advantage of the absence of rangers in the area to illegally hunt animals around Makona area of the park, as it would take several hours to drive from the Main Camp because of poor sandy roads and absence of mobile network.

On September 30, 2019, ZimParks signed a conservation Memorandum of Understanding (MoU) with the United States based International Fund for Animal Welfare (Ifaw) which funded conservation activities in Hwange National Park.

Ifaw has channelled US$1 million to ZimParks in the Hwange National Park for road rehabilitation, training and capacitating rangers, upgrade of workshop, purchase of vehicles for research purposes, establishment of a veterinary laboratory, and construction of a new camp.

Hwange National Park all along had three administrative camps namely Main Camp, Robins Camp and Sinamatela, while Makona Camp is the new facility that has been built through partnership with Ifaw.

The camp is located about 95km south west of Main Camp on the boundary with Tsholotsho’s Pumula area. The establishment of Makona Camp, which will manage 4 500 square kilometres of area, is expected to go a long way in reducing poaching and human-wildlife conflict cases by increasing the presence of rangers in the areas as well as enhance the relationship between ZimParks and surrounding communities.

Besides Ifaw, ZimParks also works in partnership with security services and communities in conservation programmes through national programmes such as Ilifa Lethu/Nhaka Yedu.

Construction of four semi-detached rangers’ houses, each accommodating two families are nearing completion while an office and senior manager’s house is being constructed. An operation centre which will be fitted with information communication technology systems for investigations and research has been completed and Minister Ndlovu officially opened the facility yesterday.

Minister Ndlovu said the five-year partnership has been a success so far.

“We entered into an agreement with Ifaw meant to support Hwange National Park and we identified Makona Camp as the first site, the reason being that it’s one of the furthest areas from Main Camp and also the road system made it difficult to get here.

“So, we agreed we have a camp here where we can have rangers and create a proper communication. They have come to the party and we are seeing today that almost two years down the line this partnership is bearing fruits and we understand that there has literally been no poaching in this area when we are coming from an era where we had all those elephants dying from cyanide, “ said Minister Ndlovu.

He said the Government needed such partnerships especially at this time when revenue from tourism had significantly declined.

Minister Ndlovu said Makona Camp will be ready in the next few months and teams move on site immediately.Mr Downes said Ifaw will continue supporting ZimParks.

“When we signed, we wanted to work together with ZimParks and we have committed US$1 million which we went out to raise to make a difference. Our impact is saving lives and what we heard today is that there has been zero poaching in areas which Ifaw and ZimParks work together, for us that’s success,” he said.

Ifaw works in more than 40 countries.

Chief Siphoso whose area in Tsholotsho borders with the game park said the establishment of Makona Camp will go a long way in addressing human wildlife conflict and fighting poaching which is rampant in his area.