Perfectly-preserved 14,000-year-old puppy found frozen with slice of extinct rhino in its stomach

By NewsroomAugust 24, 2020Science and technology
No Comments 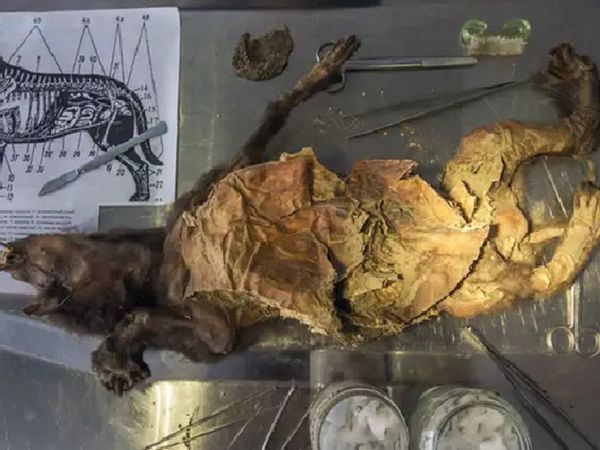 A perfectly-preserved puppy, estimated to be about 14,000-years-old, was found frozen with a slice of an extinct rhinoceros in its stomach. The prehistoric canine, which is thought to be either a dog or a wolf, was found at Tumat, Siberia, in 2011.

When the body of the dog was tested by analysts at the Natural Museum in Stockholm, results confirmed that the remains in its stomach belonged to a woolly rhinoceros, that has been extinct for 14,000 thousand years.

In other words, the mummified puppy munched on one of the last animals of the woolly rhinoceros species before dying.

“I am very happy that DNA analysis has confirmed this as a woolly rhino. I noticed that the shape of the skin was rather strange. It was rectangular. My experience of taxidermy shows that skin could not tear like this in a natural way, if it was bitten off by an animal, for example,” said Dr. Sergey Fedorov, from Russia’s North-Eastern Federal University.

“It seems likely this piece of skin with such even edges was cut artificially by an ancient human. The puppy perhaps found the butchering waste of the carcass. When I saw this piece in its stomach, I was amazed. I thought it could be the trace of human activity,” he added.

Apart from the woolly rhinoceros remains, a tiny twig was found inside the dog’s stomach.

The body of the animal has been analysed and examined for more than a year by scientists Love Dalen and Dave Stanton. But the pair from Sweden is still not 100% sure if it was a young dog or wolf.

If the scientists are able to determine the animal to be a dog, it could become the earliest confirmed dog in history. Dalen and Stanton said the discovery can be used to learn more about wolves and when were they domesticated.

The pup is ‘amazingly well preserved’ because of its frozen state. It also sports a full set of teeth, furry cover, and a bald patch on its rib-cage. It has been named ‘Dogor’ as it could be a dog or a wolf.

“It’s pretty special because you’re holding it and it really feels like a very recently dead animal. But you think about it and this was an animal that lived with cave lions and mammoths and woolly rhinos. So it’s pretty awesome. It was amazingly well-preserved even before they cleaned it up,” said Dr Dalen, who is a professor of evolutionary genetics,” said Dalen.