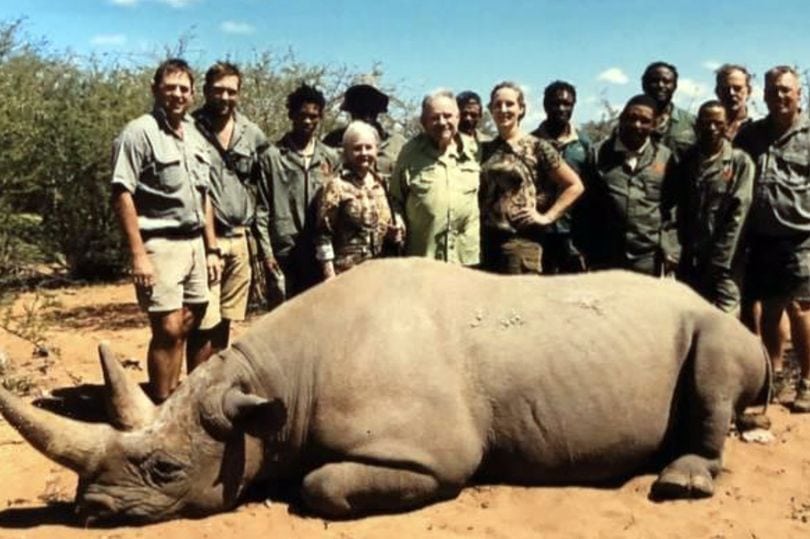 Hunters will still be able to import slain lions, rhinos, elephants and even polar bears under a new law’s perverse “pay-to-slay” clause.

A ban outlawing the importing of the sick souvenirs is to be unveiled in the Queen’s Speech on Tuesday.

Yet a loophole allows wealthy collectors to bring in tusks, skins and stuffed carcasses by paying tens of thousands for a “conservation exemption” to obtain special permits for hunts and imports.

The cash is supposed to be used for conservation and community developments projects, mostly in Africa.

But critics have slammed it as a cop-out and blasted hunters who pose with their kills as “beaming morons”.

Claire Bass, director of the Humane Society International, said: “Allowing hunting trophies to be imported under a fig leaf of supposed conservation benefit would undermine the Government’s goal of having the strongest hunting trophy ban in the world.

“To truly protect wildlife we need a loophole-free ban, not a pay-to-slay.” The campaign group Ban Hunting Trophies has demanded evidence to show where the conservation of wildlife has benefited from a version of the scheme in the US.

Founder Eduardo Goncalves said: “Trophy hunting groups have brought pressure to make the law meaningless. The ‘blood money’ loophole allows the wealthy to kill and collect the world’s most endangered animals for kicks by arguing they are funding conservation.

“Trophy hunters will be rubbing their hands in glee. It is the cruellest of bloodsports, a shameful relic of colonialism and a dark stain on society.

“Populations of lions, elephants, leopards, cheetahs and polar bears have collapsed. Yet these beaming morons are still charging around the world on a wild killing spree.

“There are just 3,142 black rhinos left. It is over 10 years since a black rhino trophy entered Britain, yet this appalling blood money loophole will positively encourage wealthy hunters to shoot some of the last of these great animals.”

Explorer Sir Ranulph Fiennes said: “If hunters really want to conserve wildlife, why don’t they just put down their guns and give the thousands they’d have spent on shooting defenceless animals to conservation projects instead?”

Comedian Ricky Gervais added: “This loophole would be a serious flaw in a good law, allowing the richest hunters to continue under the nonsense cover of conservation. It is vital this does not get through.”

And TV’s Carol Vorderman said: “This is not a rehearsal. So many species are under threat and only action right now, with no exceptions, no exemptions, no loopholes, will suffice.”

In America, permits have been issued to hunt and import black rhino. Texan billionaire Lacy James Harber was famously pictured with one slain beast he had planned to take back to the US.

UK opponents include Carrie Symonds, fiancée of PM Boris Johnson. She is head of communications for wildlife charity the Aspinall Foundation and tweeted a campaigning Mirror front page when the law was announced – before the loophole was exposed.

The SNP ’s Lisa Cameron said: “Who seriously believes these perverted thrill-seekers have conservation in mind?”

A Whitehall spokesman said: “The Government takes the conservation of endangered species very seriously, which is why we have committed to banning the import of hunting trophies from endangered species. We will be setting out our detailed plans soon.”