Peter Beard, wildlife and fashion photographer who delighted in living his own wild life – obituary

Peter Beard, who has died aged 82, was an American photographer known as much for his Byronic charm, famous friends and rackety way of life as he was for his influential images of African wildlife, which in the 1960s were among the first to chronicle the increasingly destructive relationship between nature and man.

In 1961, while on a visit to Kenya, Beard was introduced to Karen Blixen, the author of Out of Africa. He subsequently bought 45 acres of land next to her coffee farm in the Ngong Hills and was to base himself at Hog Ranch for much of the next four decades.

One of the conditions of his acquiring it, imposed by the Kenyatta government, was that he chronicle the changing condition of the landscape. When Beard had first travelled to Africa a few years before, he later recalled, its teeming herds of game had seemed inexhaustible. “Everyone agreed,” he said of its glory, “that it was too big to be destroyed.”

Over the next few years, however, while working at Tsavo national park, he began to record the steady decline in the numbers of elephant, hippo and black rhino, the victims not merely of white hunters but also of the human expansion which encroached on their habitat.

“The deeper the white man went into Africa,” wrote Beard, “the faster the life flowed out of it, off the plains and out of the bush … vanishing in acres of trophies and hides and carcasses”.

The first edition of his collection of photographs, The End of the Game, was published in 1965. By the time a second edition was issued a decade later, the losses were in the tens of thousands, in part the result of mismanagement by conservationists. He himself was briefly jailed in 1969 for assaulting a poacher. 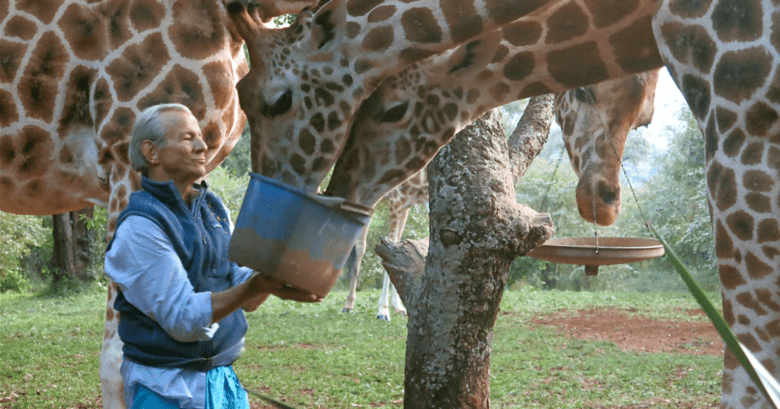 Beard’s images, usually black-and-white, strikingly evoked the majesty of Africa, albeit arguably using conventional tropes and indeed, in those which had models posing with tusks or animals, chauvinist ones. Women and wildlife were his inseparable muses, and peril often a theme of his work. “Beauty is more beautiful when in danger,” he held.

He saw himself in a line that included Ernest Hemingway and the hunter Frederick Selous – Blixen’s estate bequeathed him the film rights to Out of Africa, and her major-domo moved to live at Hog – and this influenced the collage-like appearance of his pictures.

They were often surrounded by extracts from earlier writers or from the diaries Beard had kept since he was a boy – which were later housed in leather books he was given by Jackie Kennedy. He also used found objects such as leaves, or smears of his own blood. Part of this was undoubtedly self-mythologising, but at a time before photography was generally treated as capable of being art, Beard did.

His good looks, love of life and air of sprezzatura generated an appeal that led by the 1970s to friendships with the likes of Truman Capote, Francis Bacon and Andy Warhol. In 1972 he was commissioned by Rolling Stone, the magazine, to photograph the Rolling Stones during their “Exile on Main Street” tour; Mick Jagger once turned up so drunk to meet him and Warhol that he passed out on Warhol’s bed.

As Beard later acknowledged, drugs were by then firmly a daily if not hourly habit of his own. Following his divorce in 1970 from his first wife Minnie Cushing, who came of a prominent Boston family and whom he had married three years before, he checked himself into a psychiatric clinic. Friends came to believe that he might suffer from bipolar disorder.

These troubles proved no bar to an affair with Lee Radziwill, Jackie Kennedy’s sister. Beard babysat for both John F Kennedy, Jr. and his sister, Caroline, and when holidaying on a yacht with Jackie and Aristotle Onassis won $2,000 from the latter, who had bet that Beard could not hold his breath underwater for four minutes.

Beard’s disregard for danger, and often for his own welfare – he would wear sandals even in the New England winter – seemed only to heighten his attractiveness to women, and accordingly he often treated them carelessly.

Among those with whom he had relationships were Barbara Allen, a member of Warhol’s circle, and the model and actress Candice Bergen. From 1981 until 1984, he was married, increasingly stormily, to the highest-paid supermodel of the late 1970s, Cheryl Tiegs.

Professionally, Beard worked with other celebrated models such as Veruschka and Lauren Hutton, and in the mid-1970s discovered Iman. He first saw her in the street when she was at university in Nairobi, although he encouraged hype about her in New York with a backstory that portrayed her as having been herding cattle in the bush. As it was, her father had been Somali ambassador to Saudi Arabia and her mother a gynaecologist.

The truth of other episodes in his life – attacks by lions and crocodiles, being shipwrecked on Lake Rudolf – was similarly opaque. This was also true of his finances. For all the talk – indeed, seemingly the reality – of a substantial trust fund, Beard spent much of his life cheerfully in debt and cadging large sums from others. In the 1970s he would dine with his wealthy uncle in New York and then, without the money for a room, spend the night sleeping in his car in a parking lot.

There were later accusations that the provenances of Masai “artefacts” he tried to sell were unproven. And when, in 1975, he published a collection of tales, Longing for Darkness, recounted by Kamande Gature, Karen Blixen’s former retainer, the elderly Kenyan afterwards complained that he had never received the payment promised him.

Yet Beard embraced charges that he was merely a spendthrift dilettante and was proud to say he had never had a job as such, although in fact he had held many exhibitions internationally, made documentaries and written several books. “I’m an escapist, I’m not a planner,” he said. “I’m the most irresponsible person you’ve ever met.”

Only his third wife, Nejma Khanum, an Afghani whom he married in 1986, seemed eventually to have his measure. She agreed that au fond Beard was a Peter Pan-like figure, frightened of ageing and keeping life at bay with the ever-more tatterdemalion accoutrements of fame. When he failed to appear at home the morning after his 65th birthday party in New York, she commented drily: “You’re only 65 once; it’s Peter’s coming of age.”

The second of three sons, Peter Hill Beard was born in New York on January 22 1938. He grew up first in Alabama when his father, Anson, was serving with the wartime air force. Subsequently, the family lived in a nine-room apartment on New York’s Upper East Side.

Its walls were hung with paintings by Corot and Courbet, for Peter’s paternal great-grandfather had been James Hill, the railway baron who built the Great Northern route from Minnesota to Seattle. Peter’s step-grandfather, meanwhile, was the tobacco tycoon Pierre Lorillard, who also founded the upmarket resort at Tuxedo, New York.

Anson Beard, a stockbroker, devoted his life, claimed Peter, to looking after his investments. His son felt equally out of step with his conformist mother Roseanne and as a child sought refuge in the outdoors. Given his first camera by his grandmother, he won a school prize for a photograph of his dog, Charcoal, jumping up at a ruffed grouse.

Peter was given the same education as his father had had: first at the Pomfret School, Connecticut; and then for a year at Felsted, in Essex, where he enjoyed boxing. In 1955, with a descendant of Charles Darwin’s, Quentin Keynes, nephew of the economist, he made his first journey to Africa.

Smitten by its grandeur, Beard returned to Kenya in 1961 after graduating from Yale. There he had studied History of Art and become influenced by Malthusian ideas on the dangers posed by ever-rising populations.

Until the mid-1990s, Beard still spent much of his year in Kenya. Then estranged from his wife, he shared his bed (according to magazine profiles) with four or five local girls at a time. The model Maureen Gallagher, the subject of a celebrated photograph by him of her feeding, while nude, a giraffe, also claimed to have had a lengthy affair with him.

In 1996, however, Beard was gravely injured in Tanzania when attacked by a cow elephant which crushed his ribs and pelvis and slashed his thigh. Although he recovered, he thereafter lived largely in America, citing the rise in crime and population in Kenya as having damaged its appeal. He owned a converted windmill at Montauk on Long Island, although this was destroyed by fire in the 1970s, causing him to lose paintings by Picasso and Bacon.

Beard still had enough cachet to be commissioned by Pirelli to shoot its famed calendar in the Kalahari Desert in 2009, but before then his photographs had never fetched high prices. In the last decade or so, however, they have begun to be sold at auction for hundreds of thousands of dollars.

This was attributed in part to his wife increasingly taking control of his affairs. (Court papers revealed in 2017 that she had had him committed to a psychiatric ward briefly after he returned home from a party with two Russian prostitutes in tow.) Beard had latterly suffered a series of strokes and had been diagnosed as having dementia.

On March 31 2020, he wandered away from his house on Long Island; his body was found in Camp Hero State Park nearly three weeks later.

Peter Beard is survived by his wife and their daughter.