By NewsroomApril 24, 2020Conservation, Science and technology
No Comments

Professor Thomas Hildebrandt, head of the reproduction management department at Leibniz Institute for Zoo and Wildlife Research, leads the team of scientists who announced in September of last year that they had successfully created two viable northern white rhino embryos using in vitro technology and sperm from long-dead males.

Following decades of poaching for their horns, there are just two northern white rhinos left in existence, mother and daughter pair Najin and Fatu, who live under 24-hour guard at the Ol Pejeta Conservancy in Kenya’s central highlands. Both are infertile. The two embryos will now be inserted into a surrogate southern white rhino, the closest subspecies. If a calf is born, it would herald a new era for conservation — and for one of the world’s most important critically endangered animals. 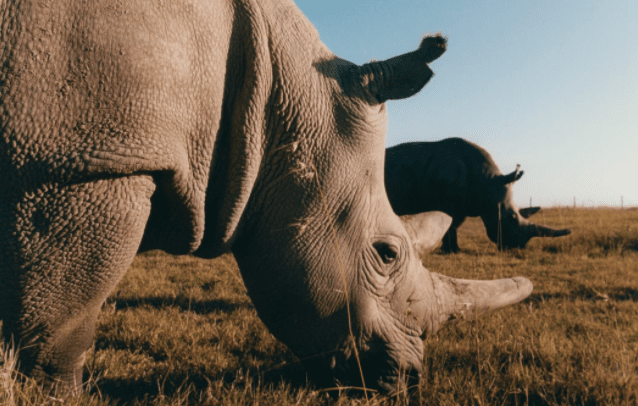 Original photo as published by i-D

Jennifer O’Mahony: When did you start working with the concept that in vitro technology could be an asset for biodiversity and conservation?

Thomas Hildebrandt: For the northern white rhino project, there are two really important developments. Firstly, the in vitro technology that was already used for other species in the past. What is new since 2012 was pairing that with stem cell technology, because for the northern white rhino, assisted reproduction would be not sufficient to actually create a self-sustaining population. If you don’t get together enough genetic diversity in the population, then it makes no sense to speak about future reintroduction plans. By pairing these two approaches, that gave us a totally new horizon on saving critically endangered species, and it also changed the way we evaluate the status of species which are on the brink of extinction. While in the past, that was based on the number of fertile individuals in the population, that is no longer necessary—or at least in the future it will no longer be unnecessary, because every infertile or even dead animal can contribute to the population by utilizing this kind of technique.

And how have you shifted your approach as the technology has evolved?

We were quite disappointed, because we worked with the northern white rhinos in the early 2000s, and all our efforts got less and less successful because of a very small population. We went to San Diego Zoo, we scanned all the individuals there, we collected semen from the last bull, which had a poor semen quality. We did that, but we were not hopeful that it had any implication for saving the species. At that time, there was the existing population of 30 individuals in Garamba. And actually, we were invited to go there to harvest more semen from the wild ones, when they were supposed to get a transponder put into their horns. But the trip was cancelled, due to the civil war. So, we never went and shortly after, all of those individuals were gone. And there is still a rumor that there are some remaining individuals left in Sudan, but nobody can prove that. The stem cell technique is only proven in a mouse, not in a rhinoceros, but it’s available to us. These samples we have for the northern white rhino are of equal or even higher genetic diversity than those of the southern white rhino (there are more than 17,000 southern white rhinos left in existence and just two northern white rhinos).

Infertility comes quite early. In the wild, the female would have one ovarian cycle every five years, because she finds a suitable breeding partner, and then she gets pregnant for 16 months. After she gives birth, then she’s lactating and is raising the calf, and during that entire time, we have an ovarian dormancy (she cannot get pregnant). If the suitable breeding partner is missing, then the female is ovulating every month, and estrogen is a carcinogenic substance. If you have about two years of cycle activity in a female rhino, then the likelihood that you develop severe pathologies is very high.

So, it is dangerous for them not to get pregnant?

The pregnancy is actually a curing element, and ovulation is a very rare event. A rhino ovulates every four years.

What is the best way to tackle the biggest threat to rhinos: poaching?

There are different organizations which are quite good at stopping smugglers and enforcing a military presence in natural reserves or national parks. But there’s one aspect, which I think should be a little bit more explored: the option to breed or to produce rhino horn in vitro. Nobody is doing that. If there is such demand on the Asian market for this kind of product, it could be easily—well, not easily, but at least it is thinkable that you could produce it like you do silk from spiders. Then, most likely is the argument that these people want the real horn. But I think that would be an option, but on every side, it’s very hard. And it is really a kind of war. It’s a very sad point, and as a reflection of that, we always get the argument, “You are now spending so much effort and so much resources to create the northern white rhino population to a level that you can reintroduce them, and then they will all be shot again.” My answer to that is that we see a lot of examples, and the best one is in Australia. In the 1930s, Australia paid a bounty for killing Tasmanian tigers, and they erased all the Tasmanian tiger population. And now they invested millions of Australian dollars to create an institute exploring the option to recreate the Tasmanian tiger to reintroduce it to Tasmania. I think if the African nations get the option to utilize the northern white rhino as a magnet for ecotourism, there will be sufficient protection from the government and from the younger generation, which will allow them to propagate in the right way and will protect them in the future.

Species have died out throughout history. Why do you think it’s important to focus research and money on these larger mammals like rhinos? What is it about them for you that makes them so important to save?

The rhino didn’t die out because of a failure in evolution. It died out because it’s not bulletproof. It’s an absolutely human-made effect. And it’s a key species, which is an umbrella species for hundreds of other species. It distributes plants on a large scale; it produces feces for insects; it makes avenues for small antelopes and other small animals; it’s a landscape architect, one of the most important ones. It lives in swampy areas, so you can’t actually bring southern white rhinos to Central Africa. So, it is a very important element, and you may remember what happens when you disturb a fragile ecosystem. It didn’t fail in evolution, it didn’t fade out slowly, but it was shot. So, by messing with this fragile ecosystem, by taking out such an important element, I think we will pay badly for this mistake, and therefore, I think it’s our responsibility to fix it.

Do you think in your lifetime, you will see a rhino being born from the embryos that you have developed?

It is not the scale of my lifetime, it is a scale of the lifetime of Najin and Fatu. So, we have to be successful as soon as possible, because we have the genetic code, which makes up species, but we also have tradition, we have the behavior aspect (any future calf would be born from a surrogate, but raised with the last remaining northern white rhinos who are both infertile). And we really want that new northern white rhino calf. These embryos have the potential to develop into such a calf, and they can learn from the last two remaining northern white rhinos. That is our goal right now. I hope I don’t fail in this kind of hope.