By NewsroomFebruary 6, 2020Anti-poaching
No Comments

Although concerted efforts are being made to curb poaching, both in Mozambique and South Africa, issues are being exacerbated by poachers posing as ordinary tourists, or using villages to gain entry into the Kruger National Park.

This as a dismal yet familiar scene of yet another poached rhino met Kruger National Park (KNP) rangers on 19 January.

Suspects involved in the killing are still on the loose, crime scene investigators said on 3 February, while describing what evidence has so far been gathered.

At present, a case docket has been opened, and two bullet slugs were found at the scene. 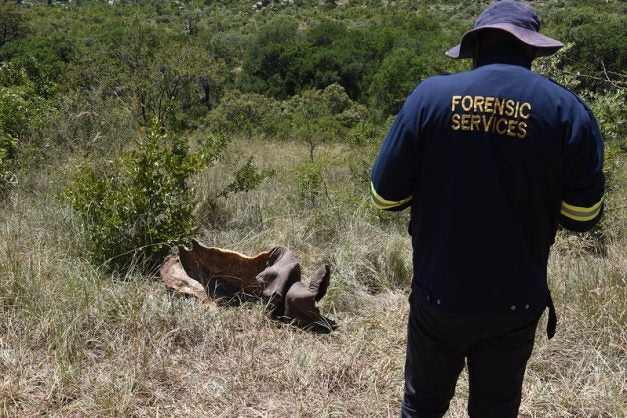 Original picture as published by The Citizen: SAPS Forensic Services, Police Crime Scene Investigator and Sanpark investigative team at Western Boundary were a Rhino was shot and killed by poachers at the Kruger National Park, Mpumalanga, 3 February 2020. (Picture: Nigel Sibanda)

South African National Parks (SANParks) communications and marketing general manager, Ike Phaahla, said that while radar and early detection warning systems are being used to prevent poaching incidents, this is not limited to rhino preservation. Many other species are currently under threat, most notably elephants and pangolins.

Phaahla said initiatives have been put in place to engage with Mozambique since 2012. Those efforts finally yielded results in 2017 when rhino poaching was recognised as a criminal offence.

Liaisons between Mozambique and the KNP are crucial, as the boundary frustrates efforts to curb poaching on both sides.

As such, Phaahla explained that because SANParks are not allowed on the Mozambican side of the border, they are alerted by Mozambican authorities if suspected poachers have entered the park.

Anti-poaching efforts can only succeed if Mozambique and South Africa’s agreement stays strong. Territorial infringement is not an option, but more authorities are being engaged with to ensure that efforts to curb poaching are not affected by political challenges. Phaahla was optimistic that political and operational cooperation was being achieved.

Poachers from Mozambique often use villages on the western boundary of the park to enter the KNP, and although there are South African poachers, Phaahla said most poaching incidents were still traced back to Mozambique.

Frustrations are, however, running high, with poachers being able to easily hide in plain sight, posing as tourists with no ill intentions.

Environmental monitors made up of villagers living in the KNP vicinity could potentially help curb even the well-hidden poachers.

Phaahla explained that the monitors patrol fences and boundaries, letting the KNP know if any tracks were picked up, and are the region’s “eyes and ears”.

The efficiency of anti-poaching efforts have slightly improved rhino poaching statistics, released on 3 February by the department of environment, forestry and fisheries (Deff), with a noted decline in rhino poaching incidents.

Deff Minister Barbara Creecy said efforts to curb poaching are in line with the Integrated Strategic Management of Rhinoceros, as well as the draft of the National Integrated Strategy to Combat Wildlife Trafficking (NISCWT). The draft was recommended in 2016, but has yet to be officially implemented.

However, celebrations over the positive news of a slight decline in rhino poaching numbers may be short-lived.

According to the World Wildlife Fund’s (WWF) reaction to the statistics for 2019, the fact that the NISCWT has not yet been adopted in parliament is worrying.

This, compounded with the sobering reality that rhino poaching numbers could only be dropping due to there being less living rhinos in the country, means current poaching numbers may not be as positive as initially thought.

This point was not touched on by Creecy, the organisation noted with concern.

In 2018, 769 rhino were killed, against 594 killed in 2019. Creecy said 327 rhino were poached in the KNP last year. Despite cautious optimism, the WWF said, organised crime syndicates continue to thrive, capitalising on poverty and desperation facing both South Africa and Mozambique.

The availability of suitable habitats for threatened species in the long term also remains uncertain.

Serious and complex social and economic drivers allowing the organised crime syndicates to thrive must be addressed with urgency in order for statistics to accurately reflect the wellbeing of rhino and other animals currently in high demand.

“The role of corruption — inevitably associated with organised crime syndicates — must also be addressed,” noted WWF’s statement reacting to the Deff release.