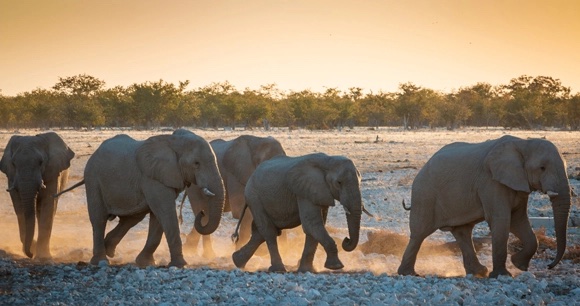 An elephant herd takes a stroll together. Image: Flickr by Martin deLusenet

Conservationists and wildlife trade experts from nongovernmental organizations across the globe are calling for a halt to Namibia’s controversial capture and export of wild elephant family groups, including a unique, desert-adapted elephant population that is already threatened by years of drought, habitat loss, and trophy hunting.

According to a number of conservation NGOs, the exports intended by Namibia—most likely headed to zoos and safari parks outside of Africa—may be in contravention of international rules under the Convention on International Trade in Endangered Species of Wild Fauna and Flora (CITES).

Vera Weber, president of Fondation Franz Weber, said: “The Namibian government declared in August that it had auctioned 57 elephants to three undisclosed bidders for a total of less than $400,000 and would export 42 of them. Although we still do not know the identity of the buyers, it is highly likely that Namibia intends to export the animals to foreign zoos, which would mean a lifetime of captivity for the exported animals, and a possible collapse of the fragile desert-adapted elephant population in Namibia.”

Conservation NGOs and wildlife trade experts, including representatives from the Animal Welfare Institute, have publicly called on Namibia to immediately halt the capture and export of wild elephants to captive facilities for both legal and ethical reasons. Technically, Namibia is only allowed to export live elephants to conservation programs inside of Africa, according to the terms of the listing of their elephant population under CITES. However, Namibia uses a contested legal interpretation of these terms to justify sending wild, live-caught elephants to captive facilities outside of their natural range. This interpretation is highly controversial and sets a dangerous precedent for the future protection of wild elephants from the impacts of international trade.

The CITES Animals Committee has also expressed concerns about this divisive issue, and the CITES Standing Committee (executive body) will examine the legality of Namibia’s interpretation as it applies to exports of live elephants at its next meeting in 2022.

Despite the current controversy, the CITES Secretariat issued a statement on September 8 all but endorsing the planned exports from Namibia—only to revise it a few days later after criticism from several Parties to CITES and concerned NGOs. Multiple news outlets have reported that the Secretariat’s original, damaging statement gives Namibia the potential cover to move forward with exports. The Secretariat’s updated statement still fails to clarify that it is not endorsing these exports. These same NGOs now ask the Secretariat to retract its statement altogether until the legality of this trade has been fully examined by the CITES Standing Committee and the Parties.

“The Secretariat’s intervention is highly irregular and has potentially troublesome consequences. It appears to give a green light to these contentious exports and to pre-empt the authority of the CITES Standing Committee by offering an opinion on a legal matter that is still undecided by the Parties,” said Georgina Lamb, CEO of the David Shepherd Wildlife Foundation.

Namibia has attempted to justify the controversial capture and export of live elephants by claiming that it is necessary to reduce elephant populations and minimize “persistent human elephant conflict.” However, according to available census data and a recent field investigation, very few elephants are present in the targeted arid Kunene Region. Elephant populations in this area are already threatened by drought, high infant mortality, and the very low number of remaining adult bulls.

“Notwithstanding our serious concerns on the legality of any exports of elephants outside their natural habitat, the capture of animals in Namibia’s dry Northwest may have a devastating impact on the viability of the few remaining desert-adapted elephants,” said Daniela Freyer, co-founder of Pro Wildlife. “Capturing, selling, and exporting elephants will not prevent conflict with humans. There are other humane, effective, and proven ways to mitigate problems and ensure co-existence between people and elephants.”

In addition to the legal controversy surrounding these proposed exports, many experts share serious concerns about animal welfare, mortality during capture and transport, and the life prospects for these animals at their final destination, which cannot be underestimated.

Jeff Flocken, president of Humane Society International, said: “African elephants are intelligent, sentient animals with highly developed emotional complexity, and strong social and family bonds that last a lifetime. It is unconscionable cruelty to subject these animals to brutal and traumatic capture, separating them from their families, and condemning them to lifelong captivity for the sake of human amusement.”

Between 2010 and 2019, African countries exported 194 wild-caught elephants, the majority of whom came from Zimbabwe, followed by Namibia. At least 22 of these animals are presumed to be dead. China has imported the largest number of elephants, followed by the United States. The IUCN African Elephant Specialist Group does not endorse such “ex situ” exports because they do not contribute to the conservation of the species in its natural habitat.

“What Namibia proposes—using a dubious interpretation of the listing rules to create a loophole that suits their purpose—risks driving a coach and horses through the underlying principles of the Convention and the authority of decisions agreed to by the Parties,” said Dr. Mark Jones, head of policy for the Born Free Foundation. “The rules regarding the export of live elephants from Namibia, by any rational reading, could not be clearer. To suggest otherwise is dangerously disingenuous. These proposed exports must be halted. Otherwise, others who wish to exploit wildlife in this cavalier fashion, with scant regard for binding rules and agreements, will be able to do so with seeming impunity.”

“With global biodiversity in a freefall, it is time to embrace protection over exploitation,” said DJ Schubert, wildlife biologist for the Animal Welfare Institute. “As African elephant numbers continue to decline due to the ivory trade, it is imperative that we protect these animals in the wild so that they can continue to play their critically important role as ecosystem engineers by maintaining savannah habitat, creating water holes, dispersing seeds, and combatting climate change. Just as transformative change is needed to address the myriad threats to biodiversity, CITES must reinvent itself by embracing new strategies to save wildlife.”