By NewsroomOctober 4, 2019Anti-poaching, Conservation
No Comments

Kenya Wildlife Service (KWS) officers are struggling to put out a raging fire in the Aberdare Forest. Officers say the fire has burned more than 70 hectares of bamboo so far.

The fire broke out on Sunday morning. KWS suspect either illegal honey harvesters or rhino poachers started the fire.

“We have identified some tracks left behind by strangers in the forest who we suspect to be rhino poachers,” said KWS boss Bajila Kofa. “We are pursuing the strangers to establish their motive, they might have started the fire to make it easy for their poaching mission.”

“The rhino poachers also have a habit of lighting the fire so that they can kill the animals as we concentrate on firefighting, but they will not succeed,” he added. 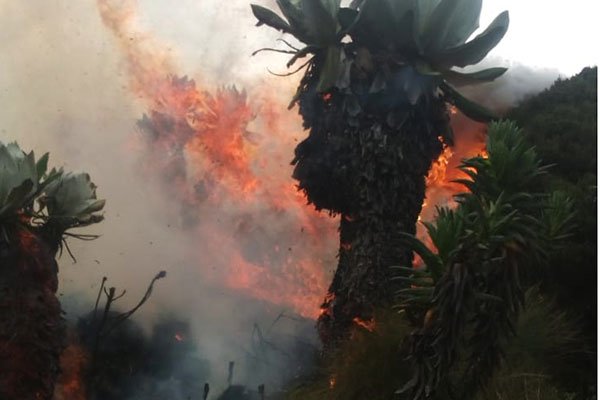 The Aberdare forest has been a hotbed for poachers as it is home to elephants, black rhinos and dozens of other animals. Mr. Kofa said forest fires are also common during the honey harvesting season.

“The fire season is here with us again, it is honey harvesting season. We expect fires in the Aberdare and Mt Kenya forests but we have activated our response team,” he said.

The fire is situated at Kinangop Peak, a short distance from Elephant Peak, the highest point of Aberdare Forest. Firefighters want to contain the fire within a 500-square-meter area. Kofa says crews will be able to bring the fire under control by Tuesday evening if winds remain calm.