By NewsroomSeptember 23, 2019Anti-poaching
No Comments

Poachers have raided the pristine Mombo Concession in the Okavango Delta, killing three rhinos and stealing their highly sought after horns within a period of one month. On Tuesday security agents discovered two carcasses of rhinos, one fresh and the other seven months old.

Botswana Police Services, District No. 5, Superintendent Samuel Kgomo confirmed that two carcasses were discovered during a routine patrol. A carcass of a white rhino showing that it was killed four days ago was found a few meters from that of a black rhino which was killed seven months ago. Kgomo said in both cases rhino horns were not recovered.

Unconfirmed reports indicate that a team was dispatched from Mombo camp on Thursday to check three other suspected rhino carcasses. Should they be confirmed the total number of rhinos killed in Mombo will increase to six in a space of a month. 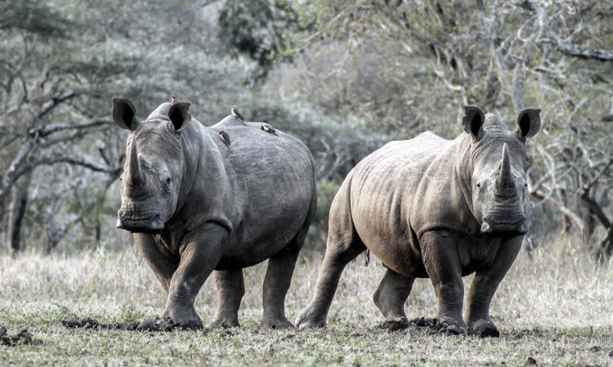 Original photo as published by The Patriot.

Two weeks ago, the Botswana Defence Force (BDF) anti-poaching unit shot and killed two suspected poachers they encountered while tracking a wounded female rhino. The suspects, who had shot the rhino, were ambushed and killed on sight.

Superintendent, Peter Gochela, Officer Commanding District No.5, said they have not identified the poachers killed in an exchange with the anti-poaching unit in Moremi Game Reserve, in Northern Botswana. Their bodies have been kept at Letsholathebe Memorial Hospital while investigations continue.

Meanwhile, information from Department of Wildlife and National Parks (DWNP) is that the 26 months old male black rhino calf whose mother was gunned down by poachers in the Okavango Delta last week will be relocated to Khama Rhino Sanctuary for refuge. Earlier the DWNP had indicated that the orphan will be released into the Okavango jungle to fend for itself but they have since decided to send it to Khama Rhino Sanctuary.

Some of the rhinos recently killed in Mombo camp were relocated from South Africa to a wilderness in Botswana to protect them from poachers.

The increasing numbers of carcasses has brought doubt about the safety of rhinos in the delta. Some have even suggested that it is time to conduct a new census about rhinos in the Mombo camp as the population might have been decreased due to high poaching incidents.

Mombo camp in the Okavango Delta used to be a no-go-zone but has turned into a safe haven for poachers. A senior wildlife officer in the Department of Wildlife and National Parks says recent poaching incidents are the more reason why Wildlife Anti-poaching Unit should be armed to combat poaching effectively.

The re-introduction of rhinos to the wild, which was hailed as a conservation success story in Botswana, started in 2000 as a partnership between Botswana and tour companies.