By NewsroomMay 30, 2020Anti-poaching, Conservation
No Comments

BANDA ACEH, INDONESIA: Wildlife poaching is on the rise in a key Sumatran habitat that’s home to some of the rarest species on Earth. But hunters in the Leuser Ecosystem appear to be targeting animals for food, rather than the area’s prized tigers, rhinos or orangutans, according to conservationists.

“Our teams have found a lot of deer snares, and these aren’t set up by professional hunters,” said Dedi Yansyah, wildlife protection coordinator at the Leuser Conservation Forum, an NGO.

“We think those snares were set up by people whose activities have been disrupted by the corona,” he added, referring to the COVID-19 pandemic.

Noviar Andayani, country director for the Wildlife Conservation Society (WCS), agreed, saying in a webinar last month that her own organization’s patrol teams had reported an increase in poaching activities amid the pandemic. She attributed this to economic losses suffered by communities living in the area as a result of shutdowns imposed in response to the COVID-19 crisis. 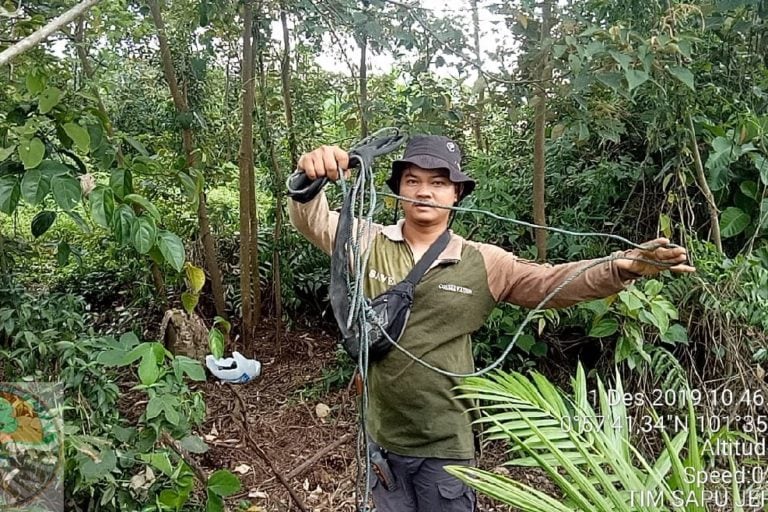 A forest ranger shows a wire snare found inside a national park in Sumatra. Image courtesy of the Indonesian Ministry of Environment and Forestry.

Local authorities working with conservation groups manage 26 patrol teams to protect the Leuser Ecosystem in Indonesia’s Aceh province. The protected area spans 23,000 square kilometers (8,880 square miles), more than double the size of Jamaica, and is the last place on Earth where the Sumatran rhino, tiger, elephant and orangutan coexist.

But rates of illegal poaching and logging there are estimated to be some of the worst in Indonesia. And local lockdown measures meant to curb the spread of the coronavirus have halted patrols, Dedi said.

“There are many challenges in protecting wildlife currently. Teams can’t be mobilized from one region to another,” he said.

Indonesia has shut down conservation areas for tourists to stem COVID-19 transmissions both among people and to wildlife such as orangutans. Many communities have also restricted access to their areas, and these local lockdowns have slammed the country’s tourism sector, including the small businesses relying on tourists who visit the parks.

With some 4 million people currently living in and around Leuser, the ecosystem is already under heavy human pressure. Species like rhinos that persist there do so in small, fragmented populations and remain highly sensitive to any human activity, Dedi said. “Rhinos are very different from other species that can live near human settlements. Rhinos need an environment that’s truly safe and sound away from human activities,” he said. 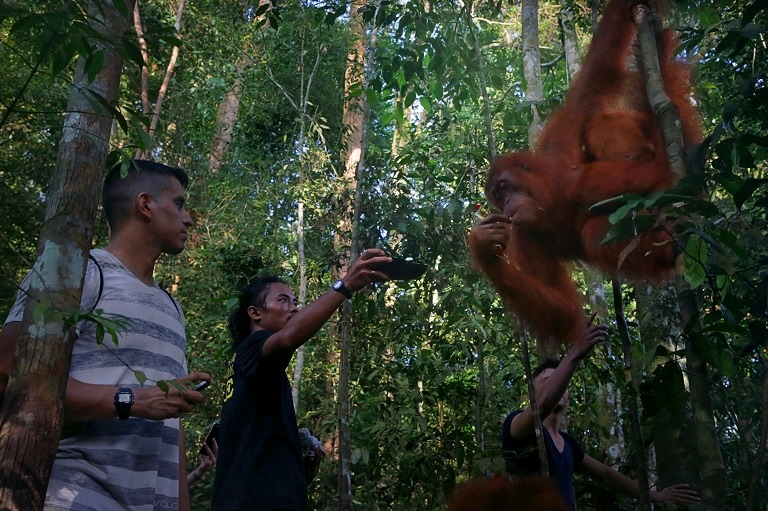 A guide feeds an orangutan as tourists watch in Mount Leuser National Park. Image by Aria Danaparamita for Mongabay.

Noviar of WCS called for more efforts by the authorities to beef up security across wildlife habitats like Leuser and an end to the wildlife trade. “Protect the wildlife in their natural and healthy habitat,” she said.

Banner image of a Sumatran rhino captured by camera trap in Mount Leuser National Park, courtesy of the park agency.