By NewsroomJanuary 10, 2022Rescue and rehab, Wildlife Crime
No Comments 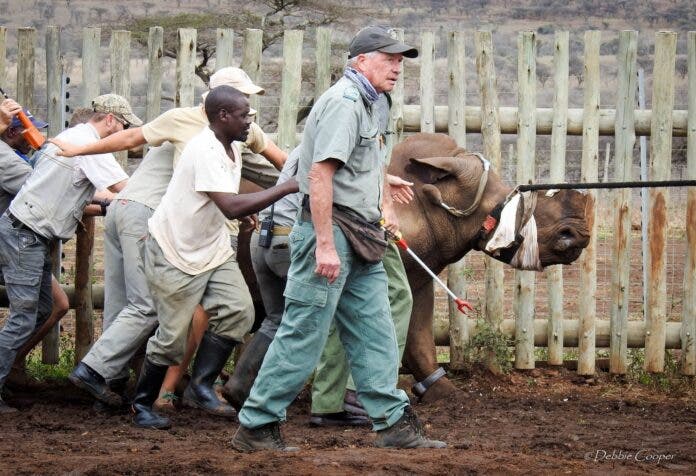 Rhino poaching in South Africa is at a critical level despite the “deafening” silence from official government communications and mainstream media, according to one of southern Africa’s most dedicated, well-respected wildlife vets, Dr Dave Cooper.

Referring to the violent killing of rhino as ‘murders’ rather than the mild, mundane word ‘poaching’, Dr Cooper has issued a massive cry for action before it’s too late, begging the world to wake up and see and stop what is happening in SA, on our watch.

His desperate plea came days after witnessing possibly the “worst day yet of my 40 years as a veterinarian” of which the last 27 have been working with African wildlife, particularly rhino.

Dr Cooper has dealt with numerous horrific poaching scenes over the past decade – “more than 600 post mortem examinations and crime scenes of murdered rhino” – so one can only imagine how devastating the scene before Christmas must’ve been.

Writing on his Facebook page ‘Wild Vet‘, Dr Cooper says: “I thought I’d seen the worst of it. But no. (In December), I came face to face with the ultimate in horrific, brutal cruelty – I dare not describe it in detail for fear of being shut down by Facebook, but believe me, it was shockingly awful!”

It was so awful he says that it has forced him to speak up after many months of silence and “deliberately only reporting positive news in an attempt to ward off the constant negative narrative”.

He says: “We who work with rhino in particular, realise that so little has been said about rhino poaching in the past 18 months that people might quite legitimately believe that the situation has improved, that the crisis has passed and there are more important issues to focus on (pandemics will do that to a society). It’s time to correct that false impression. RHINO POACHING IS AT A CRITICAL LEVEL!”

According to Dr Cooper, a much-circulated recent count of 23 rhinos poached within a 36 hour period countrywide caused some people to sit up and take notice. As did a gruesome video of a badly mutilated rhino shot by poachers in the Kruger National Park, that had to be humanely euthanised.

Poaching has been steadily rising for months

“But,” says Dr Cooper, “it’s no news to us on the ground. Poaching has been rising steadily for months now, while the silence from official government communications and mainstream media is deafening.

“After ten days of solid death and destruction – some days two dead rhino became four as we discovered corpse after corpse – culminating in Tuesday’s hideous experience, I believe we HAVE TO let the world know that the war is as vicious as it ever was.”

He admits: “I’m exhausted, I’m furious, I’m devastated. PTSD is a real consequence in this career and I’ve seen the fallout in too many good people. Some days (most) I want to scream it out for everyone to wake up and acknowledge what’s really going on. SOMEBODY needs to do a whole lot more to rein this slaughter in.

“But who is that somebody? All of us, that’s who! OUR rhino are dying in numbers. Years ago, under the former Minister of Environmental Affairs Edna Molewa, the catchy slogan was ‘Not on our watch’. But guess what? It IS happening on our watch!

“And we vets, rangers, managers, front line personnel are sick to the core of dealing with cruelty, brutality and the greed-fueled destruction of our wildlife that continues unabated and unpunished.

“It’s time for the whole world to get angry with us and help to bring about change.”

According to SA current affairs show Carte Blanche, game rangers are having to act more like soldiers to protect Africa’s last remaining wildlife from poachers.

With global tourism on lockdown during the pandemic, grounded flights and closed game parks meant game rangers were furloughed in large numbers – placing Africa’s wildlife at heightened risk and easy prey for international syndicates. On Sunday Carte Blanche tracks the plight of rangers at the front line, battling the escalating onslaught of organised crime.

Presenter Derek Watts says: “We don’t often hear the stories of poorly equipped rangers putting their lives on the line to fight sophisticated syndicates. During the pandemic, international filmmakers Dereck and Beverly Joubert decided to follow these men and women’s gruelling journeys through the wild.”