Peter Meshemi says he’s frightened. For the past 12 years he’s worked as an armed ranger in northern Kenya, spending weeks at a time patrolling scrubby grasslands in search of poachers. Now, even as he’s constantly on high alert to protect vulnerable elephants, lions, and leopards that are targeted illegally by hunters at Loisaba Conservancy, he and his 70 fellow rangers have an added worry: protecting themselves against coronavirus.

Loisaba, which sprawls over 57,000 acres, is one of more than 100 conservancies in Kenya—wildlife areas legally set aside for land preservation and managed by individuals or groups. “As a ranger you are trained to work in any situation that may arise,” Meshemi says. Yet he was not expecting to face a microscopic foe that has killed more than 79,000 people around the world and now risks—by shutting down travel and tourism—the very creatures he risks his life to protect.

“We are scared of it,” he says. “The whole world is scared.”

On April 8, Kenya reported a cumulative total of 172 cases of COVID-19 and 30 deaths. Two days earlier, the government had instituted a lockdown policy that bars most travel in and out of Nairobi County, where the majority of known cases have occurred. So far, people in the remote Loisaba area have avoided the worst in terms of human casualties. 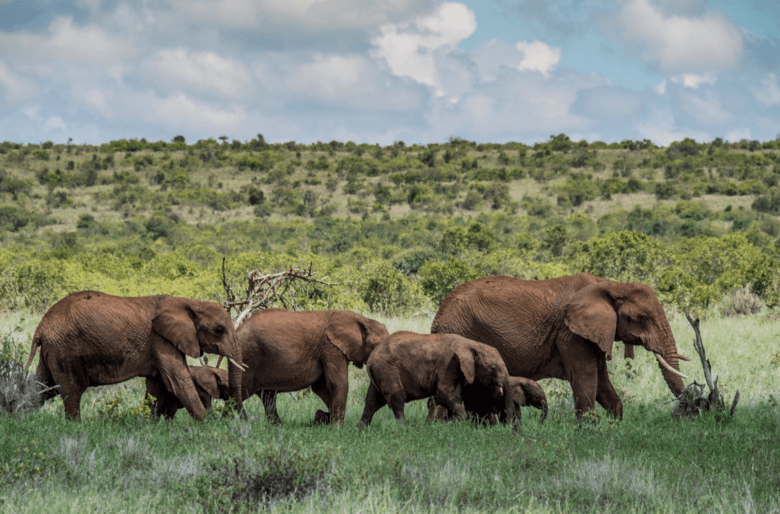 Original image as posted by National Geographic: Elephants are a draw for tourists visiting the safari camp at Loisaba Conservancy, a protected area in northern Kenya. With the collapse of the tourism industry caused by the coronavirus, wild animals may face greater threats from poachers. PHOTOGRAPH BY AMI VITALE, TNC

The conservancy, however, has depended heavily on money from wildlife safari tourism, a cornerstone of Kenya’s economy. In normal times travel and tourism provide more than a million jobs nationwide, but now that industry is at a standstill. Meshemi and many conservationists worry that one consequence will be increased wildlife poaching—either to provide food for hungry families or for illegal sales—putting him and his fellow rangers in even greater danger.

Loisaba’s CEO, Tom Silvester, says the conservancy has lost nearly half its operating budget, which normally comes from tourism fees, and it isn’t feasible now to keep its 48-bed safari camp operations open for the occasional local traveler. Last year, he says, the Loisaba safari camps received some 2,000 visitors who each paid, on average, about $600 a night. Foreign visitors may not come here again “for possibly another 12 months, if not longer,” he says, adding that the peak tourist season, from June to October, likely will be missed altogether this year.

In addition, Silvester says, Loisaba may have to shelve plans to reintroduce rhinos in the reserve. And next month, he expects to have to decrease the number of anti-poaching patrols and to ask workers to agree to a 5 percent pay cut. Even so, the conservancy still takes in some money from cattle-grazing leases and funding partners such as The Nature Conservancy, a U.S.-based nonprofit that partners with communities around the world to preserve land and water for wildlife.

Meshemi says he and his colleagues are trying to keep themselves safe.

“We are taking strong measures to keep our distance now,” he says. They also sometimes wear masks and gloves and are doing their best to wash their hands often. It’s a help that they spend their days in a wildlife-rich part of the country where there are few people. But when not on patrol, rangers and staff, some 200 people in all, live in close quarters for weeks at a time. With further travel restrictions likely to come, some Loisaba workers whose homes are far away have been leaving to be with their families. Anyone who wants to return later—assuming they can get back—will be monitored for symptoms and housed in solitary quarters with no roommate for the first couple of weeks. Silvester says he’s making preparations for possible local travel restrictions, such as ordering a three-month supply of food rations. “It’s a cash commitment, certainly,” he says.

Loisaba hasn’t had to lay off or furlough any staff. But last week 10 of the 35 anti-poaching personnel who protect the 450-square mile Enduimet Wildlife Management Area, in neighboring Tanzania, were told they were out of a job. That’s because of the budget shortfall from the collapse of Tanzania’s wildlife tourism industry, says Alphonce Mallya, the northern Tanzania conservation manager with The Nature Conservancy, which helps support Enduimet.

Enduiment encompasses about a dozen villages and abuts Kilimanjaro National Park. It’s an essential wildlife corridor for elephants, zebras, wildebeest, and impalas. Without cash coming in from safari tourism, Mallya says, it was impossible to pay all the salaries, as well as provide food and keep vehicles running. He expects increased poaching by villagers for bushmeat—everything from giraffes to dik-diks—because it’s cheaper to kill animals for meat (and possibly sell some to other local villagers) than buy it. Safeguarding wildlife in the area will be even more of a challenge for the remaining 25 workers, whose salaries will be paid by The Nature Conservancy and Big Life Foundation, an East Africa-focused conservation nonprofit that supports anti-poaching efforts, Mallya says.

East African countries are not alone in their struggles. The prospect of increased poaching because of the coronavirus is “a matter of great concern,” says John Scanlon, special envoy for African Parks, a nonprofit that manages 17 national parks and protected areas across 11 African countries. He adds that such an increase hasn’t been observed yet and that the organization is continuing to carry out enforcement operations. African Parks has also deployed workers into communities to educate people about COVID-19 and hand out sanitary supplies to help protect against its spread.

The World Health Organization (WHO) says it’s deeply concerned about what will happen when the virus takes hold in Africa, where the first COVID-19 case was reported in February. Since then, 52 countries have reported cases. “Infection numbers in Africa are relatively small now, but they are growing fast,” Tedros Adhanom Ghebreyesu, the WHO’s director-general said in an address on April 9.

Many African countries in addition to Kenya and Tanzania have imposed travel restrictions or lockdowns. Rwanda’s four national parks are closed, including the three that are home to the famed mountain gorillas, as a precaution to protect them from possible infection.

Dave Wilson, head of commercial development for African Parks, says that “just because a park may be closed to tourists does not mean our work stops in any shape or form, as we are committed to fully manage these parks on behalf of governments on average for 20 years.”

In South Africa, where a 21-day lockdown curbing public gatherings and travel, is in force, an expanded law enforcement presence may help deter some poaching, at least in the short term, says Dereck Milburn, southern Africa regional director for the Aspinall Foundation, a British conservation charity.

“There is a lot more police presence on all the major routes, and the borders are locked down, and the number of patrols in the reserves have not changed much,” said Milburn, speaking by phone from Pretoria, the country’s administrative capital. “The rangers are doing an outstanding job.”

Still, he adds, the loss of an additional deterrent—tourist vehicles in parks and reserves—may embolden poachers. There was a spike in rhino poaching in late March during the first week of the lockdown, when seven rhinos were killed. He says rangers are on the lookout for more poaching incidents.

Earlier this week, “I made about 10 calls to section rangers in every part of South Africa, and it’s been pretty quiet,” says Grant Fowlds, conservation ambassador for Project Rhino, an anti-poaching nonprofit based in the coastal city of Durban. The pandemic and the lockdown, he says, has “really stopped poaching quite abruptly,” although it may be easier in remote areas for poachers to evade detection.

“Since the first week of the lockdown, it’s been quiet,” agrees Nico Jacobs, founder of Rhino 911, a South Africa-based nonprofit that provides emergency helicopter response and transport for rhinos. Rhino 911 is allowed to keep flying because anti-poaching is considered an essential service.

How long anti-poaching activities can remain fully operational in South Africa will depend on whether they’re funded by the government or private entities, says Damian Aspinall, chairman of the Aspinall Foundation. Government reserves with annual operating budgets aren’t wholly dependent on tourism, Aspinall says, but “in most private reserves, anti-poaching is completely reliant on tourism and game sales.”

Last week in Kenya’s Loisaba conservancy, ranger Meshemi’s scheduled six-week patrol shift ended. In normal times, he’d have gone home to his family for a two-week rest, but he was asked to stay. The 43-year-old ranger will help lead part of the team of 70 bracing for increased poaching in the coming months. “We understand the situation,” he says. “Our work is around the clock.”