Prime Minister Edouard Ngirente has told leaders from the conservation world convening in Kigali that Rwanda’s numerous initiatives to promote conservation and environmental protection have been realised as a result of partnerships and collaborations.

Ngirente told participants at the ‘Business of Conservation Conference’ that Rwanda has recognised the critical need for conservation-based tourism and economic development through the protection of natural ecosystems.

This, he said, has made the country a world leader in conservation practices with more than 8.9 per cent of Rwanda’s land base protected as national parks following the addition of Gishwati Mukura National Park in 2015.

The Premier pointed to, among other examples, the conservation of the endangered mountain gorillas in the Virunga Massif. 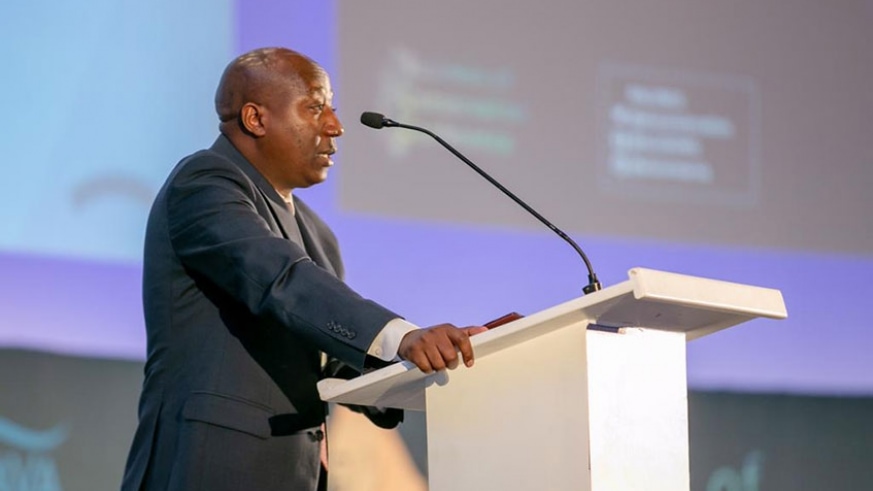 Original photo as published by The New Times: Prime Minister Ngirente addresses delegates at the Business Conservation Conference. Rwanda has recognised the critical need for conservation-based tourism and economic development through the protection of natural ecosystems. (Photo: Emmanuel Kwizera)

“As a result of government, communities and conservation partners working together, the 2016 census revealed an amazing 59 per cent increase in participation from 2003 when we started the Kwita Izina celebrations,” he noted.

Kwita Izina is one of the initiatives that Rwanda established to recognize the role of conservation of mountain gorillas, which at the time of its introduction, gorillas were classified as “critically endangered” species.

Last week, 25 newborn baby gorillas were named by celebrities, prominent business and public leaders as well as conservationists from across the region and elsewhere.

Ngirente also highlighted the reintroduction of the Eastern black rhinos and African lions in the Akagera National Park as another example of the broader commitments that the country has taken towards conservation.

The Government entered an agreement with the European Association of Zoos and Aquaria which led to a further translocation of five black rhinos from several zoos this past June 2019.

Lions were also successfully reintroduced in 2015 after being hunted to extinction in the 1990s.

An additional two male lions were transferred in 2017 to Rwanda, adding to the genetic diversity of a population that is now growing steadily.

“Our experience is that collaboration and effective partnerships are the key to how we have been able to achieve the significant results and benefits of conservation, sustainable tourism and economic benefits in Rwanda, for Rwandans,” the Premier noted.

“They are the means by which Rwanda has achieved conservation results, provide exceptional tourism experiences for visitors at home and from around the World, and improving the lives of Rwandans.”