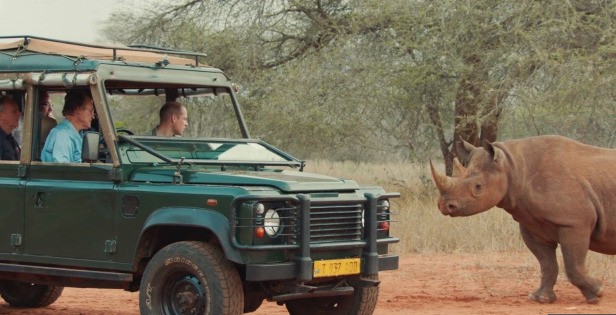 Prince William is seen feeding rhino Deborah in Tanzania for his new environmental documentary. Original photo as published by The Sun.

William and wife Kate, both 38, also met Sir David Attenborough, 94, in A Planet For Us All, on ITV next week.

Sharing the screen with Deborah, William says in the film: “People might see them and think it’s a big tank, a big hulk of an animal, with a big horn, but they are incredibly vulnerable.

“They have brilliant eyesight and people will take advantage of that and they want this horn, which is effectively nail, and that is all it is, it’s fingernail.

“This is where the horn belongs, on a live rhino and that’s where it should stay.”

William has been filmed over the past two years in the UK and countries such as Pakistan and Tanzania for the documentary which charts his journey from passionate conservationist to wanting to play a greater global leadership role on the environment.

Speaking in documentary, William suggests he expects to be criticised for his views, saying: “Someone has to put their head above the parapet and say, I care about this.”

The duke and duchess are featured with Sir David during the documentary and are filmed when Kate names a new British polar research vessel after the broadcaster and naturalist.

In the documentary, William tells the veteran broadcaster: “Every generation, you know, after yours, David, has grown up listening and seeing all the things that you’ve shown them. And, hopefully, each generation listens a little bit more.”

David brought along with him a 23-million-year-old shark tooth — which is from an extinct 15m carcharocles megalodon shark — on holiday in Malta in the 1960s.

A Life on Our Planet looks back over Sir David’s career. Famous clips include him rolling around with baby gorillas in Rwanda.