By NewsroomAugust 27, 2019Law & legislation
No Comments

GENEVA: Countries have voted against decreasing protections for southern white rhinos at the 18th Conference of the Parties for CITES, the wildlife trade treaty, underway in Geneva, Switzerland. International trade in rhino parts has been banned since 1977, but at this year’s conference, Eswatini (formerly Swaziland) and Namibia proposed loosening restrictions for their respective countries. The vote still needs to be finalized at the plenary session at the end, when all appendix change proposals passed in committee are officially adopted.

“I was encouraged and relieved to see parties resoundingly reject the proposal calling for legal international trade in rhino horn,” says Taylor Tench, a wildlife policy analyst for the Environmental Investigation Agency. “Rhino populations remain under immense pressure from poaching and illegal trade, and legalizing trade in rhino horn would have been disastrous for the world’s remaining rhino populations. . . . Now is simply not the time to weaken protections for rhinos.”

Other countries, including Kenya and Nigeria, worry that legalizing the trade would undermine the survival Africa’s wild rhinos.

“Humankind can do without rhino horn,” said a representative from Kenya during the debate. “It is not medicine.” 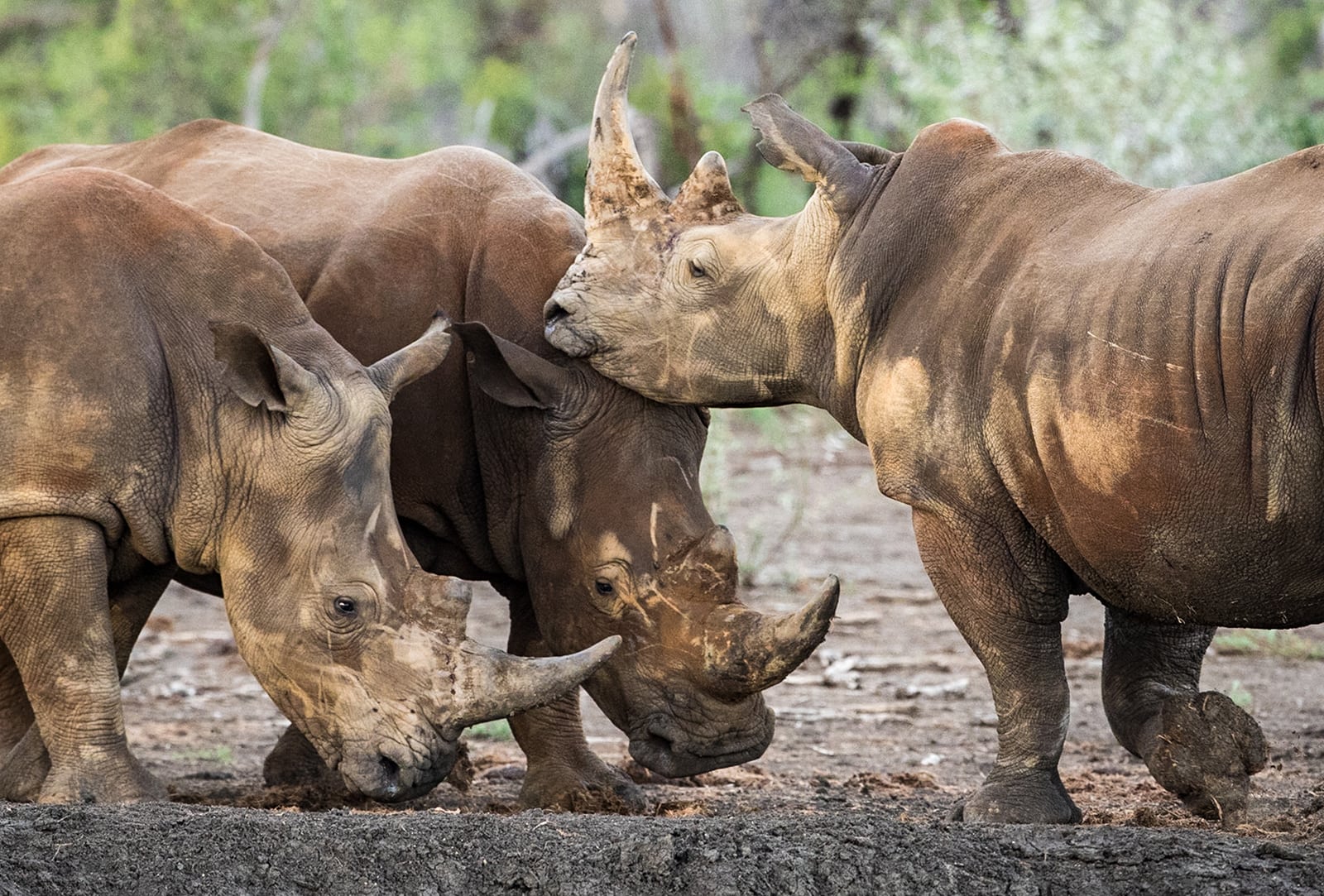 Thought to be extinct in the late 1800s, the southern white rhino is classified today as near threatened by the International Union for the Conservation of Nature (IUCN), which determines the conservation status of species. There are about 18,000 in protected areas and private game reserves today, almost all in South Africa, according to the IUCN. Black rhinos, which are smaller and have a hooked rather than square lip, are classified as critically endangered, with only about 5,000 remaining. They’re found mostly in Namibia, South Africa, Tanzania, and Kenya.

In 2005, Eswatini allowed the noncommercial trade in live rhinos and hunting trophies but not rhino horn. The country put forward a failed proposal to open the commercial rhino horn trade at the last CITES Conference of the Parties, in 2016. Eswatini’s white rhino population reached 90 in 2015, but following one of the country’s worst droughts in recent history, it had fallen to just 66 by December 2017. This year, the country re-upped a proposal to allow for commercial trade in their rhinos, including horn and parts. In a 25-102 vote by secret ballot, this measure was defeated.

Meanwhile, Namibia proposed that CITES downlist its southern white rhinos from Appendix I to Appendix II, with an annotation allowing for trade in live rhinos and export of hunting trophies. Though this move would technically weaken protections, conservationists said it wouldn’t have any significant implications in practice, since Namibia is already allowed noncommercial trade in live rhinos and hunting trophies under the Appendix I listing.

In the proposal, Namibia argued that its population no longer warrants the highest protection under CITES and that the restriction preventing export for “primarily commercial purposes” has held the country back from generating revenue for conservation. From 2008 to 2018, Namibia exported 27 white rhinos to Angola, Cuba, the Democratic Republic of the Congo, and South Africa. Namibia’s proposal anticipates creating “access to a far larger market for white rhinos,” especially with its primary trading partner South Africa. The country has nearly a thousand rhinos, and according to the CITES secretariat, the population is “increasing.”

“We are deeply concerned that unjustified trade restriction on the Namibian white rhino population, if not removed, will only deprive Namibia of their required resources to manage its populations effectively,” said a representative from Namibia during the debate.

Nonetheless, says Tench of the EIA, Namibia’s rhinos are at risk from poaching, which has intensified since 2014. The proposal was narrowly rejected in a 39-82 vote.

Hundreds of rhinos are poached every year—an average of about three a day, according to Tench—mostly for their horns. Made of keratin (the same protein that makes up our hair and fingernails), rhino horn is often used as a cure-all in traditional medicine in China, Vietnam, and elsewhere in Asia. Because southern white rhinos are more abundant and live in more open habitat, they’ve borne the brunt of the poaching, Tench says. (Go inside the deadly rhino horn trade.)

Eswatini says it has nearly 730 pounds of stockpiled rhino horn, with a commercial value of $9.9 million. Funds from sales of that rhino horn, it contends in its proposal, would have helped conservation efforts.

“Money is at the very core of the matter,” said a representative from Eswatini during the debate. “If the finance is not available to protect them, rhinos will continue to die.”

Opening the commercial rhino horn trade could have had disastrous implications, Tench says. It could have spawned a parallel illegal market, stimulated new demand for rhino horn, increased poaching, and created an enforcement burden for officials, who would have been tasked with the impossible responsibility of distinguishing legal from illegal rhino horn. “It ultimately could just kick off a new wave of demand that would be met by increased poaching. And Eswatini—it’s not the country that even could hope to supply rhino horn internationally. They have 66 rhinos.”

What’s more, the trade in rhino horn is illegal in China and Vietnam, where demand for rhino horn exists, leading conservationists to ask: Who would have engaged Eswatini in the rhino horn trade?

Neither China nor Vietnam has declared any intention to legalize the trade, although China flirted with the idea last October, when the government announced that tiger bone and rhino horn could be used legally in medical research or for traditional medicine. Soon after, a senior official announced that China was postponing lifting the ban on rhino and tiger parts, pending further study.

“The suggestion that there’s value in the rhino horn that Eswatini has is kind of false anyway, because they’re projecting that based on a black-market value and an assumption that those legal markets would open up again,” says Matt Collis, director of international policy at the International Fund for Animal Welfare, an animal welfare and conservation nonprofit that does works to prevent rhino poaching.

Collis says it’s unclear what Namibia hoped to achieve with its proposal—since under current regulations, noncommercial trade in live rhinos and trophies is already allowed in the country.

So, he says, this could have been a first step toward liberalizing trade in the future, because the proposal would have moved Namibia’s rhinos to Appendix II.

“It’s not necessarily clear what the motivation is, unless it’s for something for the longer term,” Collis says.

Going forward, Collis says conservationists need to help countries who bear the burden of protecting these species find another way to fund their efforts. “It does need a concerted effort from the international community to offer alternative ways of financing,” he says.