By NewsroomMarch 31, 2020Anti-poaching, Conservation
No Comments

On Monday, March 30, Cabinet Secretary for Tourism & Wildlife, Najib Balala, confirmed the birth of the white rhino calf at the Meru National Park.

CS Balala then went on to share photos of the 3-year-old calf alongside the mother named ‘Makosi’.

“We have a newborn male Southern White Rhino Calf at Meru National Park. He was born 3 days ago. Pictured is the newborn Calf with his mum Makosi,” the CS announced. 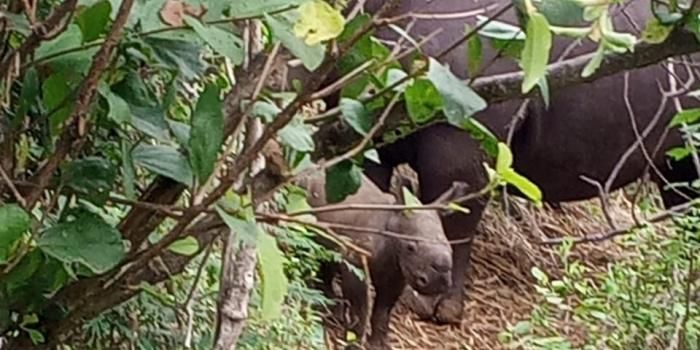 Original image as posted by Kenyans.co.ke: The rhino calf pictured in Meru National Park alongside its mum Makosi, March 2020.

There has been a boom in the number of Southern White Rhinos due to relentless efforts by rangers, wildlife conservationists, and government entities such as the Kenya Wildlife Service (KWS), who have been at the forefront in the battle against poachers.

A clear indicator of such efforts was how the world’s most famous and last male Northern White Rhino named Sudan, lived out his last days.

By the time he passed away on March 19, 2018, the 45-year-old rhino had was under 24-hour armed surveillance at the Ol-Pejeta Conservancy in Kenya.

The team of expert veterinary doctors monitoring Sudan’s condition (due to old age, he suffered from painful degenerative changes in his muscles and borns), took a difficult decision to euthanise him, leaving behind the last of his subspecies: two female Northern White Rhinos named Najin and Fatu.

According to the African Wildlife Foundation (AWF), the Northern White Rhino was originally found in Chad, the Democratic Republic of the Congo, Uganda, the Central African Republic and South Sudan.

However, rampant poaching, driven by political violence and insecurity in the region wiped out populations in just a few years.

“The last known protected Northern White Rhino breeding population was built up in the 1990s, from a small group of 13 survivors in the Garamba National Park in the Democratic Republic of the Congo to a peak figure of 32 individuals, but all were subsequently lost to poachers and armed groups,” a report by the AWF reads

On realisation that all rhinos were on the brink of extinction, conservation efforts were stepped up and coordinated across multiple countries.

This is what saved the Southern White Rhino – there were just 50 of them left when the move to protect them at all costs were implemented.

“From an isolated population in South Africa of not more than 50, the Southern White Rhino has recovered to 20,000 ranging across the region. A few were introduced to Ol-Pejeta Conservancy, which is also home to the largest and most significant black rhino sanctuary in East Africa,” the report by the AWF further reads.

The latest calf born in Meru marks the successful integration of the subspecies that were previously found only in the southern parts of Africa.

Kenya’s success in integrated and protecting this rhino sub-species has seen it moved from the endangered list to the nearly-threatened category.