Remarkable women on the frontline for animals

Simpson first realised something was very wrong with the Australian live export industry when she was in her third year of veterinary school and got a job loading farmed animals onto ships. She saw for the first time the dead and injured being dragged off trucks that had come from the farms. She could have walked away then, but she didn’t.

Within three weeks of graduating, Simpson took her first live export voyage on a ship bound for Saudi Arabia, and over the next 10 years she worked on 57 similar voyages. Each vessel carried up to 20,000 cows or 100,000 sheep for weeks at a time over vast seas, only for her charges to be slaughtered once they reached their destination.

It was a career full of adventure. She sailed through environmental disasters, war zones, and pirated waters, but because of the sheer number of animals she looked after, and the severity of their suffering, the work was chaotic, filthy, and brutal. On board, the overcrowded animals suffered heat stress, suffocation, starvation, and thirst. Lying down meant they were likely to be trampled.

Mother cows and sheep suffered miscarriages or stillbirths; still more had their babies crushed to death under the sea of hooves. Simpson describes the animals on one voyage as actually having melted. They were “cooking from the inside”. She spent her days seeing to their injuries, doing what she could to relieve their suffering, and euthanizing those she could not help. What kept her going on those harsh journeys? “Black humour,” she says, “and wine.” In reality, knowing she was providing a meaningful service to the animals by trying to reduce their suffering gave her a true sense of purpose.

Over the years, Simpson made countless reports to the Government detailing the terrible reality of life aboard the ships, but her concerns for the welfare of the animals went ignored. Then, Simpson was offered the chance to make a lasting difference. She was offered a job as a technical advisor with the Department of Agriculture, which regulates the live export industry, as it carried out a review.

The report she submitted exposed the cruelty and suffering at the heart of the trade. Her evidence, including graphic photographs, was an unprecedented body of work documenting the horrors routinely occurring on board. Simpson felt she was making a powerful case for reform of the industry – she was finally being heard.

When the evidence was accidentally leaked to the public in 2013, it was explosive, blowing apart claims by the industry that animal welfare was a top priority. The fallout meant Simpson was hounded from her career. There was, she says, a silver lining: “I could then strategize to speak up loudly and raise awareness, knowing I had nothing to lose.” Her actions have also allowed more whistle-blowers to come forward with their own damning evidence. There is no doubt that the Australian live export industry will end someday, and that day will come sooner thanks to Lynn Simpson.

Balule Nature Reserve, part of South Africa’s Kruger National Park, is home to the ‘Big Five’ – rhinos, elephants, buffalo, leopards and lions. Hyenas and venomous snakes can also be found in the Park and yet still the most dangerous creatures in this hot, unforgiving landscape are human. 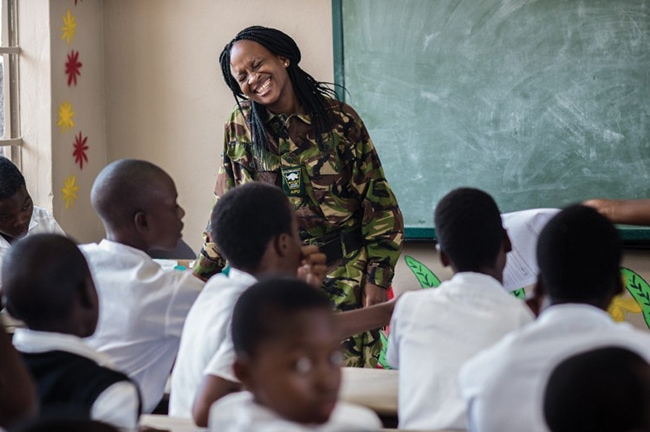 Two years of intense poaching was wiping out Kruger’s rhino population and it was clear to the authorities that a radical new approach was needed. It came in the form of an unarmed, all-female anti-poaching patrol that relies on keen observation and a visible presence, and which prioritises positive relationships over force: the Black Mambas.

Among the very first women to enroll was Felicia Mogahane. “At first, people around the world thought that anti-poaching is a man’s job,” she says. “They think women are there for taking care of babies, maybe cooking at home. They never thought that women can protect wildlife and do this dangerous job.”

She faced the same attitude from within her own home. “At first my family was so negative about this idea,” she says. “They said, ‘Don’t go. What about us?’”

Now, with more than 30 rangers, the Black Mambas have been true pioneers in a profession that is heavily dominated by men. They spend months in intense field training, learning surveillance practices, compliance techniques and how to survive alone in the bush. Once in the unit, they spend three weeks away from home at a time, conducting long patrols, including at night, both by Jeep and on foot. Often far from backup, they dismantle poachers’ camps and snares, come to the aid of animals who’ve been harmed, and search for signs of intrusion, such as breaks in fencing, human tracks and even out-of-place rocks.

Their approach is working. Poaching in and around Balule has decreased dramatically since the unit began, including among rhinos, the main species the Mambas was created to protect. So, why are they so successful?

“The Mambas are the eyes and ears of the reserve,” explains Mogahane. “We do visual policing. We look more carefully because we’re not carrying guns.” Her colleague, NoCry Mzimba has another explanation: “The poachers, they are afraid of the Mambas. They’re not sure what we’re capable of. That’s our secret.” There is no doubt that their work involves danger and hardship and many, including Mogahane, are mothers who rely on family and neighbours to help rear their children while they’re away.

While no Mambas have been killed for their work, they know poachers have murdered many rangers at other African reserves. “I sometimes think they will come to our reserve and do the same thing,” Mogahane confesses, and yet she has no regrets. “I’ve committed myself to saving rhinos and wildlife,” she says. “As long as I go home sometimes to see my family, it’s OK for me. The animals need my love. As a woman, I feel proud of myself. When I wake up in the morning, I’m like, ‘Wow, it’s me doing this.’”

Borneo is world-renowned for its incredibly rich biodiversity. There are eco tours that take visitors to see sun bears and pangolins, and diving expeditions to see marble rays and leopard sharks. But there are species that get far less attention, like the country’s stray cats and dogs.

She was brought up in a family who love dogs, and so her first instinct when faced with an animal in need is always to help. “I do love all animals,” she says. “I do follow stories of wildlife rescue, but I’m not a specialist in any of the wildlife, so I help cats and dogs because that’s the thing I can help with.” These are wise words for anyone wondering how they can make a difference in the world: commit to changing the things we can change.

Under Dukim’s leadership, BAWSS advocates for Borneo’s stray cats and dogs through innovative, educational and humane programmes. She goes into schools to teach children about compassion for animals and how to care for an animal responsibly.

She speaks to people who are hesitant about neutering, and explains what not neutering their dogs and cats could mean: two or more litters a year and a lot of hungry mouths to feed. That often convinces them.

Dukim travels to islands and other remote communities where feral cats and dogs have bred without control, and runs TNR – trap, neuter, return – programmes. At Pom Pom Island, a small coral reef island in the Celebes Sea, her team was able to trap and neuter 74 of the estimated 100 cats. While there, they treated infections and injuries. It is relentless work.

Dukim is particularly concerned for those animals who were once pets only to be abandoned on the streets. “They have to suffer looking for their own food as opposed to being fed properly,” she says. “And when they get sick nobody really cares for them. Some may get hit by a car and that’s the kind of life strays face here.”

There is no doubt that BAWSS is having an impact, and is not only saving lives and preventing suffering but is winning over hearts and minds. Things are changing and what Dukim’s team has achieved is nothing short of incredible. But for her, it comes down to individuals; finding an animal in need and giving their story a happy ending.

She talks about one little dog named Leah, who was found with a severe skin infection that had left her almost entirely bald. Now, sitting calmly next to Dukim at the Kota Kinabalu sanctuary, this little black-and-tan dog with soft brown eyes is in perfect health and waiting for her forever home.

“We’re very happy when they get adopted,” says Dukim. “It’s what makes this job worthwhile.”

To discover more extraordinary stories of women on the front line of animal protection – or to nominate someone you think should be featured – visit Unboundproject.org.