By NewsroomJune 21, 2021Rescue and rehab
No Comments 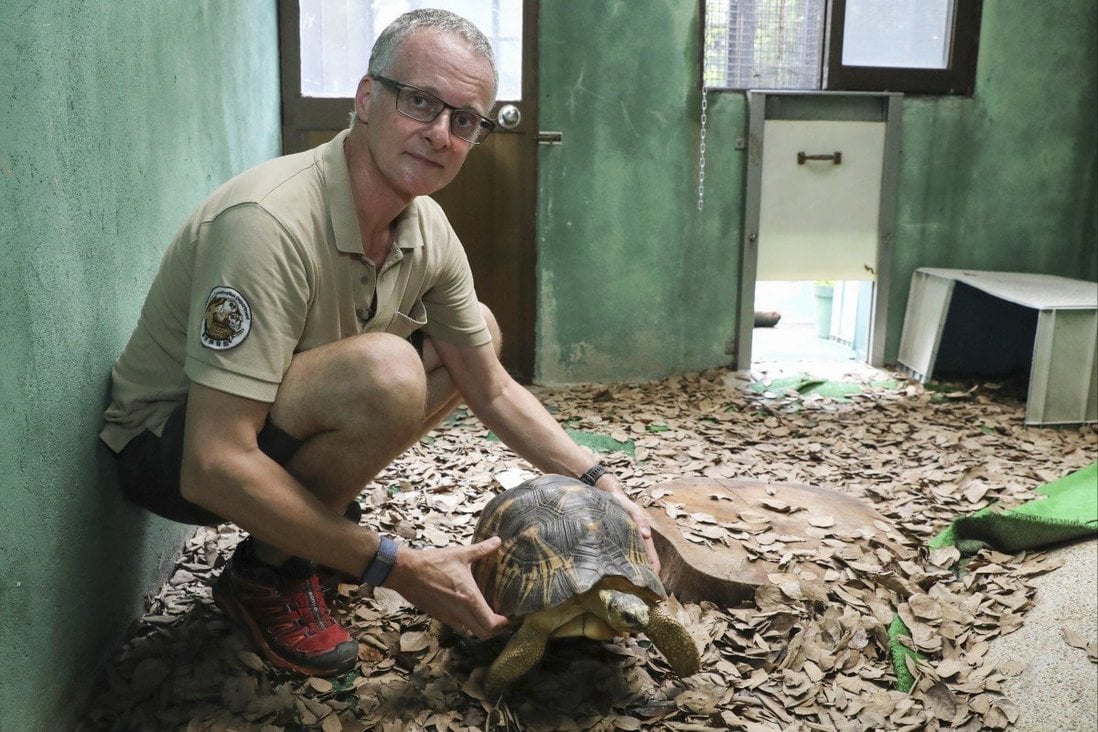 Then he bends down quickly to stop a large radiated tortoise from escaping. The endangered reptile with a star-patterned shell is native to Madagascar, more than 8,000km from Hong Kong, and was rescued from animal traffickers intending to sell it to the illegal pet trade.

Along with nearly 400 other animals, it is waiting to be moved to a zoo or conservation centre abroad, except that transport costs have risen sharply during the coronavirus pandemic.

Paul Crow, senior conservation officer of Kadoorie’s Fauna Conservation Department, said: “Flights have been either impossible to get for certain routes over the past months or four to five times the normal cost.”

Some animal placements, including to Spain, Australia and Indonesia, were cancelled when the recipients found themselves struggling through the pandemic or had to close, he added.

A spokeswoman for Kadoorie said airlines appeared to be charging arbitrarily to transport animals. One airline said it would cost up to HK$21,800 (US$2,800) to ship two turtles within the region in a crate the size of a carry-on suitcase, while another said it would charge HK$8,800.

The centre has been handling locally rescued wildlife and animals seized from the illegal trade since 1994.

It recently managed to place 14 out of 55 radiated tortoises, with an estimated market value of HK$340,000, at the Tierpark Berlin zoo in Germany. The zoo paid for the transport costs.

Kadoorie currently houses nearly 700 animals, of which 400 are from seizures. These include mammals such as the pygmy slow loris, a “cute” endangered species targeted by illegal wildlife traders, as well as numerous other turtles, from Galapagos tortoises to Indian softshelled turtles.

Hong Kong is a hub for the wildlife trade, both legal and illegal. It is also an important transport point for endangered and expensive reptile species meant to be pets.

In 2019, authorities seized more than 2,700 live reptiles from the illegal wildlife trade, and 220 were placed at Kadoorie.

Last year, there were only 20 confiscations and none were sent to the centre, while this year there have been no seizures so far.

The Agriculture, Fisheries and Conservation Department said it had previously helped fund three shipments of animals at the request of Kadoorie, and would continue to work with the organisation as needed.

Kadoorie and environmental NGO WWF-Hong Kong warned that the recent drop in seizures did not mean the illegal wildlife trade had ended.

Veterinarian Grioni agreed that concern over illegal wildlife, whether for food or for pets, remained.

“It would be an ideal dream to say smuggling will stop when the pandemic is over, but that will probably not happen, and we will start receiving them again,” he said.

Jovy Chan Yuet-shan, manager of wildlife conservation at WWF-Hong Kong, said the United Nations estimated that seizures represented only a tenth of all illegal wildlife trade activities, and urged Hong Kong residents not to buy exotic animals as pets.

She said traffickers had begun using cargo containers to ship dead animals and animal parts valued for medicinal properties, such as pangolin scales.

On June 10, Hong Kong authorities seized 1.4 tonnes of dried geckos, an endangered species, that had been declared as pet food. Confiscated at the airport, they had an estimated market value of about HK$1.24 million.

“As long as there is demand, there will always be smuggling,” Chan said.

In the meantime, Grioni said Kadoorie had to be careful about the number of seized animals it took in and would continue working towards rehoming them.

“The more animals you take in, the less attention you can give them. We don’t want the rescue centre flooded with animals we cannot maintain,” he said.

With the exact origins of trafficked animals often untraceable, it was difficult to return them to the wild, and certainly not in Hong Kong.

That is why they had to be rehomed at facilities abroad for breeding, educational and conservation purposes.

“We cannot keep them forever, as it would go beyond the role of rescue centres,” he added.