Respect, decency, and the fading art of honest debate. 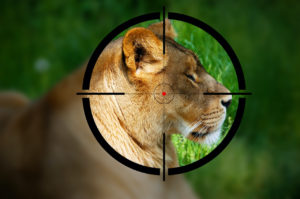 Why the sigh? Well, headlines like this are becoming something of a mantra in certain quarters of conservation, especially amongst those who support hunting—trophy hunting in particular—and those campaigning for a legal trade in ivory and rhino horn. They don’t exclusively go hand-in-hand, but more often than not, they do. And quite frankly, the claims are rubbish. But when I say “rubbish,” let me be absolutely clear about what I mean. I am having a go at the hunting lobby that devours articles such as this and then proclaims them as irrefutable proof that hunting is good for conservation. I am certainly not cocking a snook either at Morss’s perfectly reasonable reporting or at the scientists’ open letter to which it refers.

Of course, you would cry “rubbish,” I hear my critics chorus. (Another sigh …) Yes, I am on the board of the Shannon Elizabeth Foundation, and we don’t support trophy hunting in any shape or form. That’s a fact. But my personal antipathy towards hunting and trade goes way beyond my alignment with the Foundation, and anyone familiar with my writing will know that I have been steadfast in my criticism of these activities for decades.

It is also silly to lump all celebrities together as if they’re in lockstep about every issue on the planet.

Many celebrities do hunt, of course—Kid Rock, Avril Lavigne, Chris Pratt, and Joe Rogan, to name a few. Donald Trump Jr. is hardly shy and retiring about his enjoyment of the activity: “Hunting forces a person to endure, to master themselves, even to truly get to know the wild environment. Actually, along the way, hunting and fishing makes [sic] you fall in love with the natural world. This is why hunters so often give back by contributing to conservation.”

And then there are the princely brothers, William and Harry. Both have hunted, and William’s open support of elephant hunting caused quite a stir when he was quoted as saying: “There is a place for commercial hunting in Africa as there is round the world. It’s not everyone’s cup of tea, but the argument for regulated, properly controlled commercial hunting is that the money that goes from shooting a very old infirm animal goes back into the protection of the other species.” Well, it’s certainly not my cup of tea William, but I defend your right to enjoy yours while hoping that one day, my side of the argument will persuade you to change.

Presumably, hunting apologists don’t take issue with these celebrities. So why come down on those who add their voices in opposition to blood sports? Why are people such as Leonardo DiCaprio, Alicia Silverstone, Ellen Degeneres, Shannon Elizabeth, and many more dismissed as publicity seekers who have been “captured” by animal rights NGOs? Surely, they are also entitled to their convictions, to express them openly, and to be part of the rapidly growing wave of folk who believe that species other than just ours deserve better treatment? Why should they be sneered at? Collectively, these well-known personalities pour millions into conservation every year and work hard for the cause. Anyone suggesting that they are “undermining global conservation efforts” is both ridiculous and nasty.

But nasty and vindictive is what we tend to be these days. We are becoming so polarized, so intolerant of any viewpoint that jars with those bouncing around in our own, hermetically sealed echo chambers, that the ability to engage sensibly and rationally is all but lost. Extremism permeates virtually every aspect of our society. Top of the pile has to be religion and politics—one needs only to look at America’s rapid descent into life-threatening intolerance to bear this out.

Sadly, vitriol is hurled from both sides of the divide. In reading Morss’s article, I was appalled to learn of the abuse directed at Dr. Amy Dickman, the lead signatory to the open letter referred to earlier. Dickman is a senior research fellow at Oxford and 132 of her colleagues, all scientists, also signed the document. I know many of them by reputation and some personally—none would put their name to something that hadn’t been carefully considered.

The missive was in response to the Campaign to Ban Trophy Hunting, and their lobbying of the British parliament in a document which the scientists maintained was misleading. Fair enough. It is the job of scientists to do this, and it’s okay to agree with them or not. What is not okay is to castigate them for voicing their misgivings.

Morss reports one twitter engagement between Dickman and Peter Egan, welfare campaigner, and actor. In it, Egan says (to Dickman), “You clearly are a very limited scientist. Perhaps you should seek advice from inspirational figures like @JaneGoodallInst you’re [sic] on the wrong side of history.” Dickman’s measured response was rather good, I thought: “I tend to avoid attacking people on a personal level, we should be able to respectfully debate these issues without resorting to that. I will always be guided by evidence and conservation science, and make no apologies for that, even if you find that limited.”

This attack on Dickman was quite mild and civilized, judging by others. In Morss’s article, the scientist claims to have been accused of being a “paid mouthpiece” for hunting, “a monster,” and “a twisted sadistic bitch”. Perhaps, the worst was a critic Dickman claims as saying, “they would love to see her face ripped off by lions.”

From time to time we all say things we later regret, but c’mon people that’s plain disgusting—idiots who say such things are certainly not part of the conservation vision I follow. I was also appalled to learn that she was unwelcome at a parliamentary meeting to discuss the banning of trophy hunting. That in Britain, the proud defender of free speech? Wow, that is a setback.

The real problem is that there are fanatics on both sides of the trophy hunting and trade wrangle. And when given a suitable platform, their voices start to dominate the narrative and intimidate other more reasonable minds to the point they become reluctant to participate in the dialogue. That’s mob rule, and it has no place at the table.

Dickman et al. state that, “Calls for hunting bans usually cite conservation concerns. However, there is compelling evidence that banning trophy hunting would negatively affect conservation.” Their letter concludes thus: “Some people find trophy hunting repugnant (including many of us), but conservation policy that is not based on science threatens habitat and biodiversity and risks disempowering and impoverishing rural communities.” In my next editorial, I intend to take a closer look and comment on their “compelling evidence.”

I am not a scientist, but I believe implicitly in the process of science. I also believe, with great inner conviction, that killing any living creature as a form of recreation (for “fun,” in other words) should not have a place in our world. Not now and certainly not in the future. Science is an excellent tool for giving us the data, the facts. But when it comes down to what we ought to do with that information, we move into the realm of philosophy. And there, I suggest, science is no longer the ultimate arbiter.