By NewsroomOctober 15, 2019Uncategorized
No Comments

A rhino was filmed going for a walkabout in a crowded market. The animal casually strolled past liquor shops and clothes showrooms in Nepal as shocked members of the public looked on.

What was probably more surprising is no-one seemed to be scared of the rhino, which had strayed from the popular Chitwan National Park. Some tourists were so comfortable they even took selfies with the large beast on Thursday. 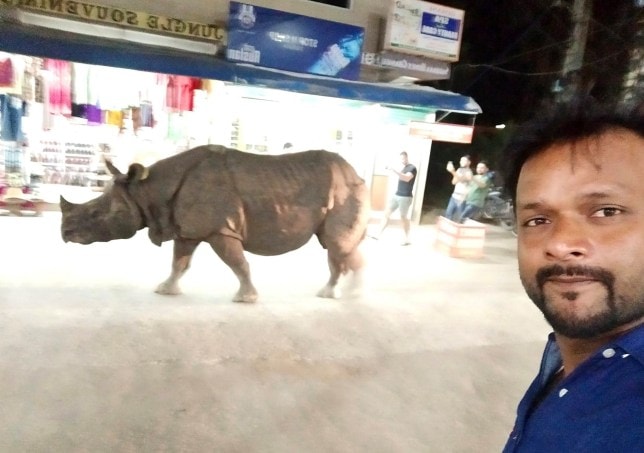 Original photo as published by Metro: Tourist Shankar Kandu Ravi, 31, got a selfie with the rhino. (Picture: Caters)

Shankar Kandu Ravi, 31, from Uttar Pradesh in India, followed the elusive animal for about ten minutes and then took a picture with it.

Mr Ravi said: ‘I was on a trip to Chitwan National Park to celebrate my friend’s wife’s birthday on October 10. ‘In the evening, my wife, the friend and his wife went to see a cultural program and I stayed back at a hotel.

‘Suddenly my driver called me to tell about a rhino walking past our hotel. I rushed to the road and saw people were taking videos and pictures of the animals.’

Mr Ravi said the rhino even came face-to-face with a couple but didn’t attack anyone. He added: ‘It was just acting to scare the couple. It warned people to not come close. ‘Next morning, I had inquired about it and learnt that it returned to the jungle early in the morning.’