By NewsroomApril 6, 2021Anti-poaching, Conservation
No Comments 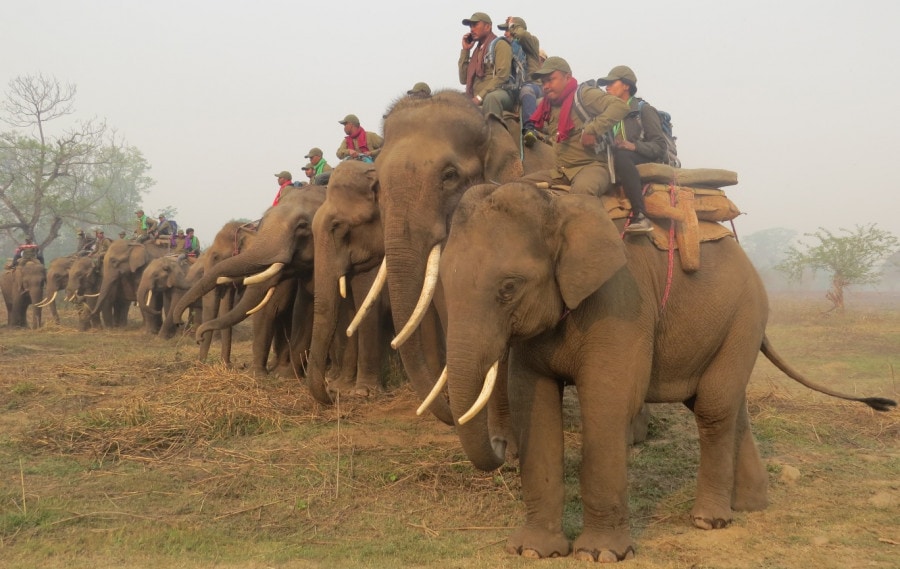 A wild elephant attack has brought a halt to Nepals long-awaited rhino census. Image: As originally published by Kathmandu Post.

The ongoing rhino count in Chitwan National Park has been temporarily halted since Friday afternoon after a wild elephant attacked the enumerators in the field.

The team of wildlife technicians and park officials, deployed to conduct the census of one-horned rhinos, were violently attacked by Dhurbe, a rogue elephant, at the Gaidakhasa area of the park, leaving several people injured.

According to Ananath Baral, chief conservation officer with the park, around 10 people, counters and mahouts, suffered injuries on their legs, hands and eyes whereas one was critically injured in the attack that took place at around 2:00pm.

“The wild elephant had been following the enumerators since morning. After some rounds of firing to scare the elephant, we had managed to chase it away. But it was hiding and later suddenly attacked the team,” Baral told the Post from Chitwan. “When Dhurbe came nearly, it violently marched towards the team and attacked the elephants being used for the count. Our elephants got scared and ran amok and enumerators mounted on elephants fell down.”

Binod Shrestha, a wildlife technician with the Biodiversity Conservation Centre, Sauraha, under the National Trust for Nature Conservation, suffered injuries on his hand, leg, waist and neck. He was later airlifted to Kathmandu for further treatment.

Dhurbe, the rogue wild elephant, has killed 15 people in a span of four years in Chitwan National Park area. After being out of sight since 2013, it reappeared in 2018. Two years later in 2020, after it was frequently sighted, the elephant was radio-collared to track its movement, fearing it could cause havoc as earlier.

“The radio-collar sends signals in intervals of three to four hours but the elephant keeps moving. Within half an hour, it can cover a long-distance. [On Friday too] we had been keeping a watch over the elephant since morning. Nepal Army personnel had also tried scaring it,” said Baral. “Luckily, it didn’t attack any person and only chased elephants, and they got scared and the enumerators fell. If it had attacked anyone after they fell off the elephants, the situation could have turned more tragic.”

As part of the national census of one-horned rhinos in the country’s protected areas and adjoining forests, counting of rhinos had started from the Chitwan-Parsa complex on March 22.

The government has planned to unveil the result of the rhino census, which is happening after six years, in the third week of this month.

But for the moment, the census has been halted in Chitwan.

“We have not continued the work after the incident took place. We had also thought of taking a break either on Saturday or Sunday as the team had been working for four consecutive days,” said Baral. “We have planned to resume the work from Sunday, but we need to discuss it.”

As per the plan, the counting of rhinos in Chitwan National Park has to be finished within three weeks.

According to Haribhadra Acharya, spokesperson with the Department of National Park and Wildlife Conservation, one more week is needed to finish the count in Chitwan National Park.

“We hope that the recent incident won’t affect in delaying the outcome of the census. Disturbances often take place while working in the field although this time there are several people injured,” said Acharya. “Even before Friday’s incident, an enumerator had fallen off an elephant. The counting of rhinos will not be affected greatly.”

Baral, the chief conservation officer with Chitwan National Park, said nearly 60 percent of total work has been completed so far. The team needs to decide about the resumption.

“We need to decide in which area the team should start working. We need to think of Dhurbe,” said Baral. “Before beginning the count, we also need to consider security measures to remain safe and alert. Some of our enumerators are injured, but their morale is high as they are experienced in being in the jungle amidst such dangers.”