By NewsroomJanuary 16, 2020Conservation
No Comments

Eighteen months after a white rhino cow was killed for a minuscule bit of horn, the unexpected birth of a calf in the same Eastern Cape reserve has given an outspoken and passionate wildlife activist new hope for the year.

Ayesha Cantor, from Kragga Kamma Game Park on the outskirts of Port Elizabeth, said they were beyond devastated in June 2018 when one of their white rhinos, Bella, was killed even though she had been dehorned. Her attackers hacked out the last bit of horn left before fleeing. They were later arrested for a series of rhino poachings and will stand trial later in 2020.

“Bella was killed only six days after her horn was removed. They just shot her. Her baby, Tank, who was still an infant, and Tank’s father Chuck, were spooked by the poachers and took off. 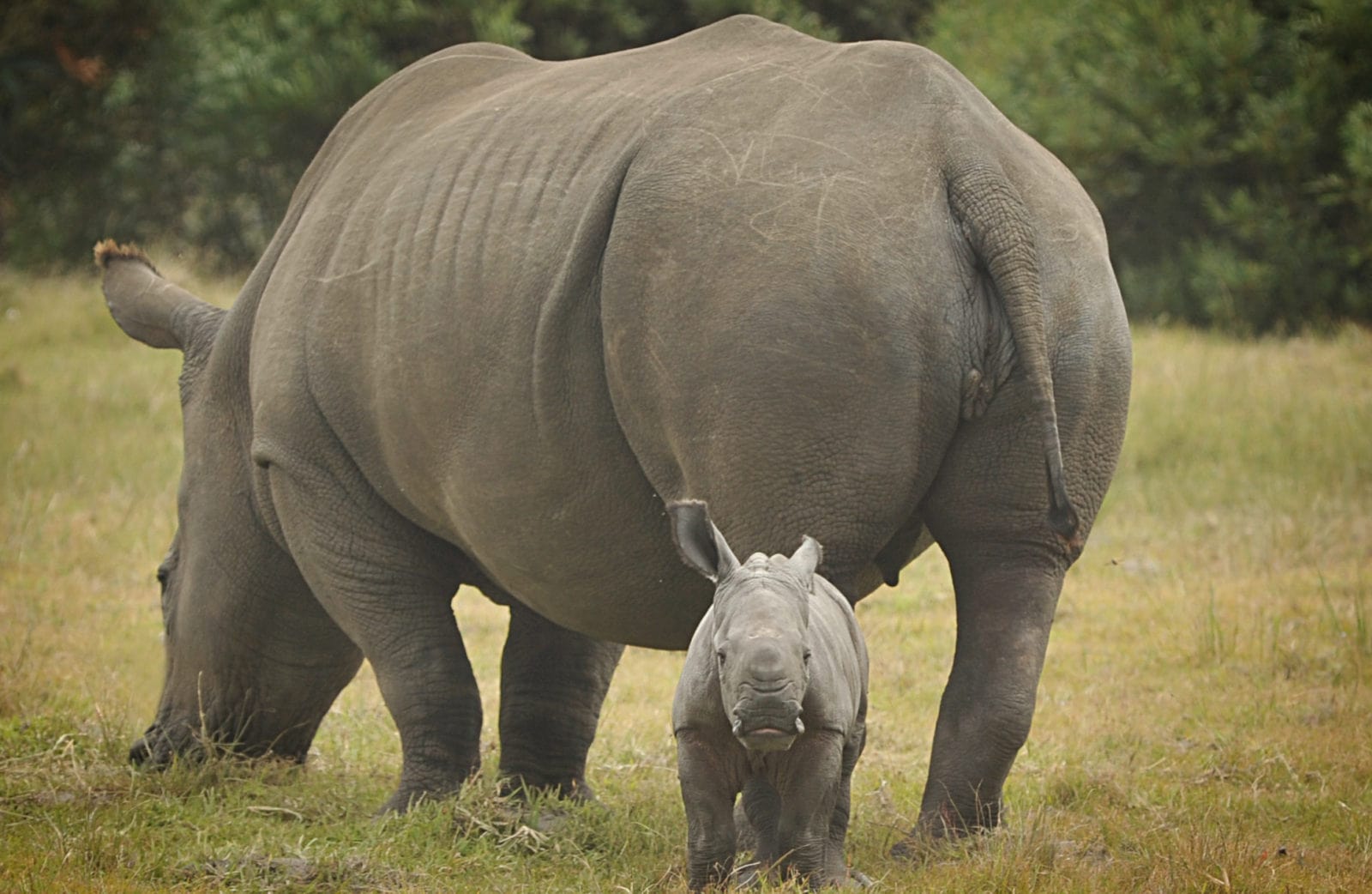 Original photo as published by Daily Maverick: Bembi and Ella in the Kragga Kamma Game Park on the outskirts of Port Elizabeth this week. The rhinos have armed guards and 24-hour surveillance. (Photo: Mike Holmes)

“One of the neighbours to the park actually heard the shots. They were so close to his house. He shouted at them. It was such a well-planned attack. They waited until the rhino patrol had passed and then they went for Bella,” she said.

At the time, another rhino cow, Bembi, had a calf that was close to Tank in age and she adopted the little orphaned calf.

“I will never forget those days,” Cantor said. “Tank would follow her everywhere and ask for milk. She pushed her own calf aside to help him.”

On 3 January, Cantor was busy with the cheetahs in the park when her phone rang. “One of the women rangers was calling. She was screaming into the phone. I only heard ‘rhino’ and I thought it was another problem. But then I heard her say: There is a baby. There is a baby rhino.”

An overjoyed Cantor rushed to where Bembi and Chuck were to find the tiny calf, who has been named Ella, by her side.

“We were so delighted and surprised,” she said. “We saw them mating a while ago but rhinos have a gestation period of 16 months and after 16 months we thought there will not be a baby,” she said.

Cantor said the birth of Ella, who now weighs around 60kg, brought them healing and closure after the loss of Bella.

“Many people said I shouldn’t have announced it on social media but I think the only way for us to fight this is to make sure that entire communities adopt rhinos as their own and fight for them together.”

She said while people were fond of funding rhino orphanages it will also help to support reserves as they had to implement 24-hour security for the animals.

“We have eyes on them all the time. I sit up with them many nights just watching, making sure that they are safe. We have rangers deployed to only look after Bembi and her calf. We dehorn our rhinos and also have their stumps trimmed regularly,” she said.

Cantor, who is also vocal at the trials of rhino poachers in the Eastern Cape, said it was important that people attend the criminal trials of the men accused of killing rhinos.

“Last year judges and magistrates said that our support at court showed them how large the public interest in these poaching cases is,” she added.