By NewsroomDecember 19, 2019Land conservation
No Comments

Rhino Fund Uganda has come out to denounce plans of forcefully take over a total of 62 square kilometers of land in Nakasongola which was leased to the organization in 2002.

Under the said License agreement, Rhino Fund was to establish and manage a Rhino sanctuary on the said land for a period of thirty (30) years. In a document authored by Rhino Fund Uganda Board Chairman, Daudi Makobore, Ziwa Ranchers had the right to continue with its cattle farming on the said land however, Joe Roy moved his cattle to his other ranch (Kiryana) where he had a cattle farming business by choice. 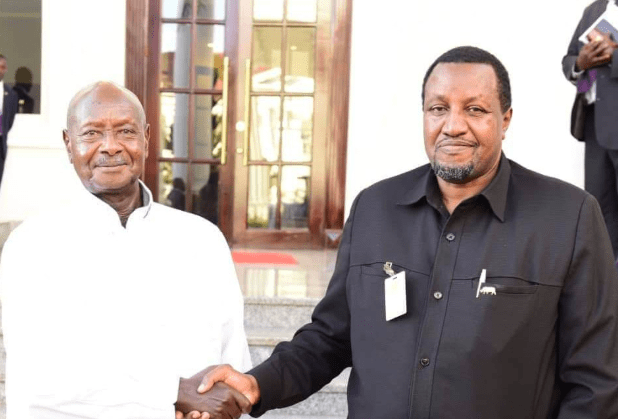 Original photo as published by Soft Power News: Rhino Fund’s Daudi Makobore with President Museveni during a recent meeting on the matter.

“No license fee or payment to Ziwa Ranchers or Joe Roy is recorded in this license agreement. Joe Roy is to date running his business (Ziwa Rhino Lodge) which comprises of guest houses, backpackers, camping and a restaurant on the sanctuary,” Makobore explained.

Makobore said that at the time of execution of the License agreement, Joe Roy and his wife, a one Daisy Roy were the only shareholders/Directors in Ziwa Ranchers Ltd with 50% shareholding each. “On the basis of the License agreement, Rhino Fund Uganda invested heavily with donor funding in terms of infrastructure development including but not limited to purchasing and transporting of rhinos, electric fencing the entire land, dams, fences and outposts, setting up sanctuary buildings, maintenance of Roads and establishing a school within the sanctuary and serving the community and district with various social corporate responsibility projects,” Makobore said.

Makobore said that sometime in 2009, the shareholders of Ziwa Ranchers Ltd (Capt. Joseph Charles Roy and Mrs. Daisy Roy) transferred all their stakes in Ziwa Ranchers Ltd (the company) to Amiral Karmali and Rukhsana Karmali who later became shareholders and directors of the company. “On or about the 16th October, 2017 and with no basis at all, Rhino Fund Uganda was stunned to be served with what purported to be a termination notice from M/s Omongole & Co. Advocates, Counsel for Joe Roy allegedly terminating the 30 years License agreement between Rhino Fund and M/s Ziwa Ranchers Ltd,” Makobore said.

He says that on the basis of the purported termination notice, Joe Roy has continuously issued eviction threats to Rhino Fund Uganda and on 28th January, 2019, Joe Roy through his lawyers issued a notice to Rhino Fund to vacate certain facilities within the sanctuary. “The “Land Wrangle” being referred to in the media is twisted and misinterpreted. Rhino Fund Uganda, its Executive Director and D & D International Ltd (Amuka Lodge) have no desire or have never attempted to “steal” any Leasehold or Mailo land from Joe Roy”.

What is referred to as a “Land Wrangle” is merely the above contesting the early termination notices and protecting their interests and investments on the said land, Makobore clarified.

Makobore noted that on the other hand, by letter dated May 27, 2019, Joe Roy through his lawyers wrote to the Ambassador of the European Union (EU), World Bank and UNDP urging them to desist from further funding Rhino Fund Uganda, claiming in this letter that Rhino Fund Uganda and its Executive Director are busy with illegal activities and conflicted.

“On the basis of these facts Rhino Fund Uganda instructed its Lawyers Ms. Opyene & Co. Advocates and Ms. Sekabanja & Co. Advocates to seek necessary redress from the courts to protect among others its interests on this land,” Makobore noted.

The lawyers thus secured a court injunction to foster the security and safety of the Rhinos, an extremely vulnerable and endangered species. “This order aforementioned does not and did not by any glimpse of error or wildest interpretation bar Joe Roy from accessing his land, business or client guest house which he refers to as his home. Joe Roy, his colleagues and family have been and still have access to the sanctuary whenever and wherever he wishes,” Makobore noted. He added that, “The ‘war’ which is played to the gallery is to distort the clear facts of the sequence of events.”