By NewsroomAugust 23, 2021Anti-poaching, Conservation
No Comments 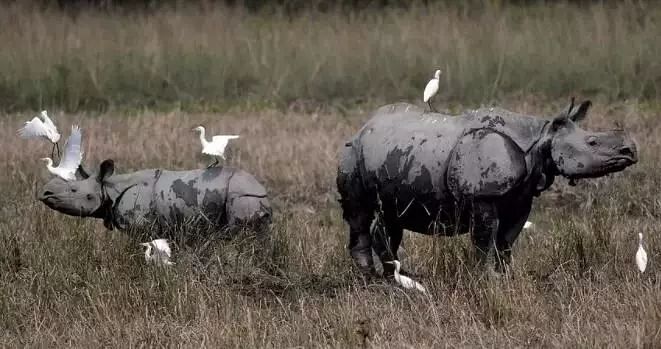 Rhino horn inspections are underway in India. Image: As originally published by The Sentinel

The four-yearly inspection of rhino horns kept in various district treasuries in the state is currently underway.

The inspection of rhino horns in the Morigaon Treasury is over. The next such inspection will be in the Barpeta Treasury. The Forest Department has around 2,500 rhino horns in various treasuries, mostly in Golaghat and Kaziranga. The department seized around 1,000 of the horns from poachers, and the rest were of rhinos facing natural death.

The inspection of rhino horns involves counting, cleaning and repairing damage through medication. The inspection team comprises officials from the Forest and Veterinary departments, district administrations and wildlife experts, besides some select people from diverse fields like the media, as witnesses.

In the current inspection of rhino horns, the authority has barred media persons from entering the room where inspection goes on. However, the media can watch what is happening inside on a big screen outside the room.

On the allegation of replacing genuine rhino horns with duplicate ones, a forest official said, “Sometimes we seize duplicate rhino horns also from poachers. We maintain registers for both genuine and duplicate horns. Forest officials and police personnel jointly lock the box containing rhino horns.”

Responding to a query – why the Forest Department opted not to burn rhino horns in 2016, the then Forest Minister Pramila Rani Brahma said, “The government will decide it taking all stakeholders into confidence.”

There were objections from various stakeholders on the practice of burning rhino horns, the pride of Assam.

Departmental sources, however, said that they are in favour of destroying rhino horns as they are a burden for treasuries and the Forest department. Rhino horns are of no use, but their security is a problem, they said.