By NewsroomSeptember 5, 2019Uncategorized
No Comments

IMPHAL: One rhino horn was seized by a combined team of Senapati District Police and Senapati Divisional Forest Office from Mao Gate as it was being smuggled towards Moreh.

According to information received from Forest Department, the rhino horn wrapped in black plastic was seized while it was being transported in a jeep (Bolero) at around 6.30 pm of August 31.

While a case has been registered at Mao police station in connection with the seizure, Senapati District Police and Senapati Divisional Forest Office have geared up to investigate the matter.

Notably, rhino horn is sold at clandestine international markets at the rate of Rs 30 to 40 lakh per Kg. It is reported that the rhino horn seized at Mao Gate may be weighing around 300/400 gms. 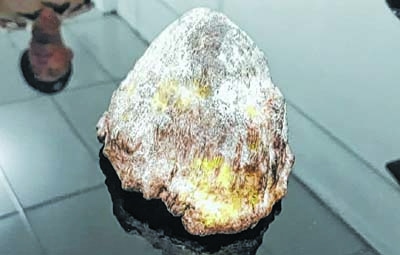 Original photo as published by Thesangaiexpress.com.

One KS Lyanzaw Zou who is a police Constable, currently posted at Bishnupur, went to Dimapur on August 23.

He was given the rhino horn by one Hoinu of Dimapur on August 31 with an instruction to hand over the same to one Bella of Kotlen.

As Lyanzaw brought the rhino horn in a vehicle, he was stopped by police at Mao Gate and his vehicle was checked.

One checking the vehicle, a rhino horn wrapped in black plastic was found. Preliminary investigation revealed that the rhino horn was supposed to be taken to Moreh after handing it over to Bella. Lyanzaw is currently lodged in police custody.

It is said that Lyanzaw tried to evade checking at police check points/gates by showing his service identity card.

Hoinu brought the rhino horn from Assam to Dimapur and it was Lyanzaw’s responsibility to take the horn from Dimapur to Imphal. The horn was supposed to be taken to Moreh from Imphal by Bella. Before he departed for Dimapur, Lyanzaw met Bella at the latter’s residence and they are said to be professional smugglers, according to sources.