By NewsroomNovember 28, 2019Anti-poaching
No Comments

GUWAHATI: A joint operation of state police and forest teams led to the arrest of four “wanted” poachers in the Behali area of central Assam’s Biswanath district on Tuesday night, a statement said.

Sources said the rhino poachers were intercepted at Botiamari-Rangsali Road around 9.30pm on Tuesday while they were coming by a tempo (bearing registration number AS12AC5797) to the hunt rhinos at Kaziranga National Park and Tiger Reserve. 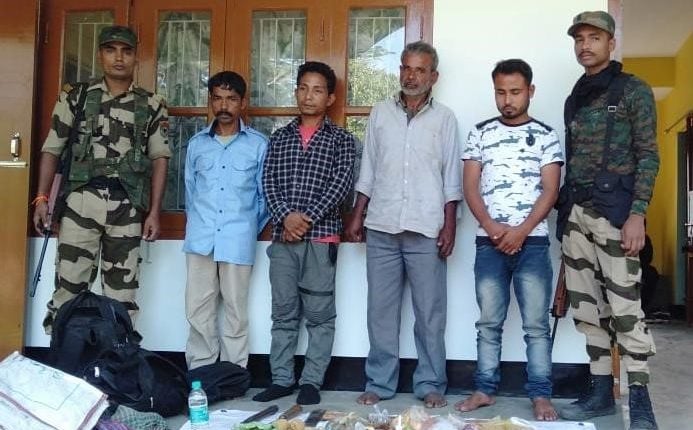 Original photo as published by The Shillong Times: The arrested poachers with the recovered items. (ST)

During detection and on further search, ration/grocery items, mobile phones and some other incriminating articles (used in poaching rhinos) were recovered from their possession. Investigation is on.

The arrested poachers include Paosanthang Guite (33) alias Thang, who is a sharp shooter, Babul Das (44), Bimal Bania, 24, and Sukhdev Mukhiya (55). All the four were on the “most wanted list” of the police and they have been involved in many rhino poaching cases of Kaziranga National Park and Tiger Reserve in the past.