By NewsroomDecember 24, 2019Anti-poaching, Conservation
No Comments

Thirteen rhinos have been poached in Botswana in the last two months, the tourism ministry said, as the government tries to crackdown on hunting of the endangered species. The country is home to just under 400 rhinos, according to Rhino Conservation Botswana, most of them roam the grassy plains of the northern Okavango Delta. 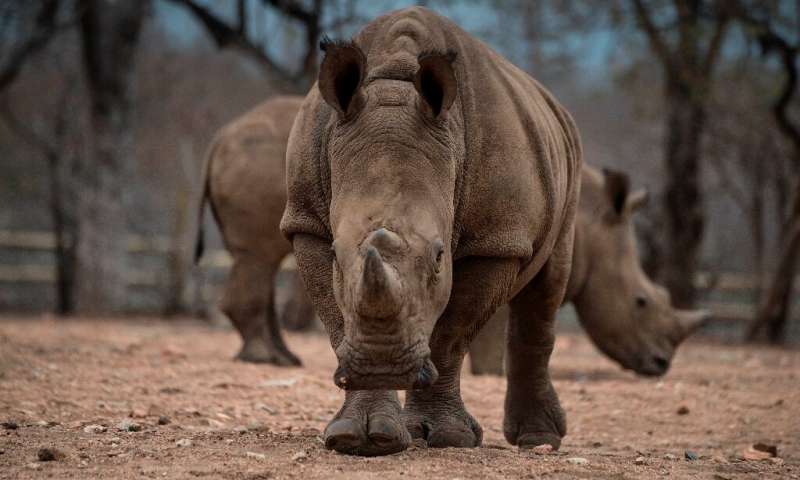 Original photo as published by Phys.org: There are fewer than 25,000 rhinos left in the wild in Africa due to a surge in poaching.

“From October 2019 to date, 13 more rhinos have been poached,” the ministry said in a statement released over the weekend, adding that the number of rhinos poached since October 2018 now stands at 31.

Twenty three of those were white rhinoceros and eight were black rhinoceros, which are classified as critically endangered by the International Union for Conservation of Nature (IUCN). “This unfortunate situation on the country’s population has continued with more rhinos being killed from October 2019 to date,” the ministry said.

In October, the government reported nine rhinos had been killed between April and October this year.

The thousands of rhinos that once roamed Africa and Asia have been culled by poaching and habitat loss. Very few are found outside national parks and reserves.

The tourism ministry said the government has stepped up efforts to tackle poaching with interventions leading to the recovery of some horns and hunting weapons. The ministry reported seven casualties among poachers who were resisting arrest.

Sold for up to 55,000 euros ($60,300) per kilo on the black market, rhino horn is used in traditional medicine or as a symbol of wealth and success.

Botswana’s neighbour South Africa lost 769 rhinos to poachers last year, and more than 7,100 animals have been slaughtered over the past decade. There are fewer than 25,000 rhinos left in the wild in Africa due to a surge in poaching, and only 5,000 of them are black rhinos.