A 40-year-old man accused of poaching and exchanging gunfire with members of the police outside Otavi made his first appearance in the Otavi Magistrate’s Court yesterday.

Joseph Ngoma appeared before magistrate McLean Handjamba, facing a charge of hunting specially protected game after he allegedly shot and killed a rhino in the Etosha National Park on an unknown date. 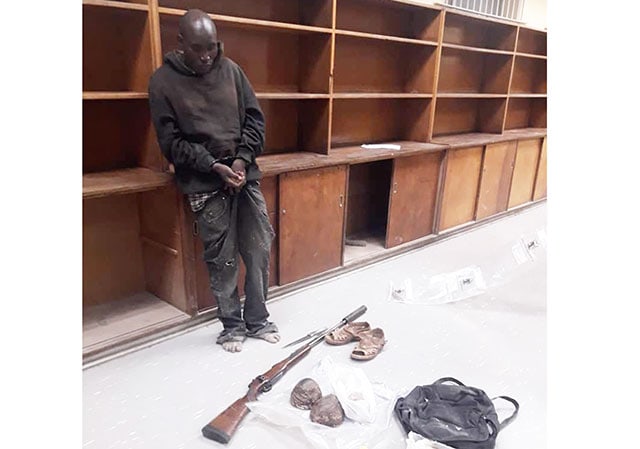 Original photo as published by The Namibian: The 40-year-old Joseph Ngoma, who is accused of rhino poaching and exchanging gunfire with the police on Sunday, at a farm outside Otavi in the Otjozondjupa Region. (Photo: Contributed)

He also faces charges of possession of a rhino horn, an unlicensed gun and ammunition, and of attempted murder for firing at police officers when he exchanged gunfire with 15 police officers and members of the Namibian Defence Force for nearly two hours on a farm outside Otavi on Sunday.

The magistrate explained Ngoma’s legal rights to engage a private lawyer, apply for a state-funded lawyer, or defend himself in court.

He opted to engage the services of a private lawyer. The case was postponed to 19 November 2019 for further police investigations, and to allow the accused time to acquire legal representation.

Ngoma was remanded in custody at Otavi, but was informed that he can formally apply for bail.

Public prosecutor Sarah Kandume represented the state in the matter. Ngoma allegedly exchanged gunfire with police officers and members of the army for nearly two hours at a farm outside Otavi on Sunday.

The Otjozondjupa regional crime investigations coordinator, deputy commissioner Naukalemo Andreas told Nampa on Monday that the gunfire started around 12h00, and only ended when Ngoma allegedly abandoned the hunting rifle he was using. The suspect was apprehended later that day.