By NewsroomAugust 20, 2019Law & legislation
No Comments

A crackdown against rampant poaching in the Save Valley Conservancy south-east of Zimbabwe has bust a five-man gang.

Two of the suspects have been arrested while their alleged accomplices remain at large but the net closing in on them as the Zimbabwe Republic Police (ZRP) and National Parks and Wildlife intensify operations against the menace.

Josphat Muvezwa (aged 31) and Given Shumba (38) have since appeared before Chiredzi district magistrates, Geraldine Mutsoto, following their arrest at a roadblock in the Mkwasine Estate area. 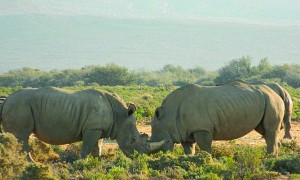 Plans to escape the barricade proved futile. They face charges of illegal possession of weapons and poaching after they were found in possession of an automatic assault rifle, 57 live ammunition and three knives following a search on their vehicle.

It is suspected they were heading towards Save Valley Conservancy game to hunt the endangered rhino species.

Authorities believe the men are behind the shooting of a rhino Senuko Range in March.

Their arrest comes on the heels of a man, Charles Nduna, for allegedly killing and dehorning a rhino earlier this year.

Rhino poaching remains a threat in Save Valley Conservancy.

According to Save the Rhino, at least 175 rhinos have been poached in Zimbabwe during the past five years.