By NewsroomMarch 11, 2020Anti-poaching
No Comments

Conservationists and wildlife health experts at the Lewa Conservancy in Meru have expressed optimism that rhinos in the region will soon be removed from the red endangered species list following gradual increase.

The sanctuary for endangered wildlife species recorded 23 births in the last two years, marking a 9.5 per cent increase in black rhinos, and 10.5 per cent rise in the southern white rhino population. 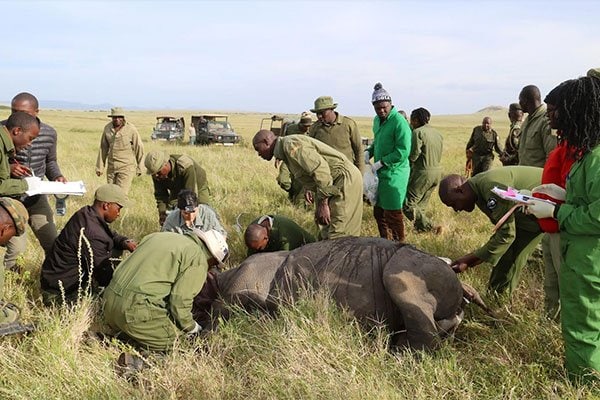 The conservancy is now home to 109 black and 97 white rhinos which is about 14 per cent of Kenya’s total rhino population.

Speaking at the conservancy Tuesday, Dr Martin Mutinda, a veterinary officer with the Kenya Wildlife Service said the birth rate is good news.

Kenya put in place an ambitious plan to raise the dwindling population of rhinos in the country, targeting a five per cent growth rate every year.

“In the rhino management strategy, we aim for a five per cent annual growth rate and in Lewa, between 2017 and 2019, black rhinos growth rate stood at 9.5 while white rhinos had 10.5 per cent increase.

“We are way above the national five per cent strategy. We are dedicated towards moving the rhino away from the red endangered list,” said Dr Mutinda. The conservancy has made huge strides in containing poaching, with only one poaching incident recorded since November 2013.

Lewa introduced the ear notching to help conservationists identify individual rhino from another and track the animals and detect potential danger. Through the technology, the rhinos are monitored round the clock by rangers who have GPS enabled radio call and report on their locations in real time.

Last year, the conservancy for the second time made it to the prestigious IUCN Green List of protected areas, one of only three Kenyan organisations.