The following infographic, though not exhaustive, outlines 15 crucial, interlinked and intertwined issues that have become critical in the fortunes of rhinos, indeed for all wild species that face the depredations of trafficking and overexploitation.

Despite the great divide that the no trade/pro trade debate has created, the one thing about which all rhino conservationists will agree is that there is no silver bullet. No one thing that above all else will ensure the survival of the species in the wild in Africa and Asia.

Instead, the answers lie in a whole range of tactics and strategies that need to be rigorously applied. Only if consistent progress across this broad front is maintained will the future of rhinos follow the high road. Failure, even in a few areas, will create weak links in the conservation chain and rhinos will continue down a very uncertain path.
Read more 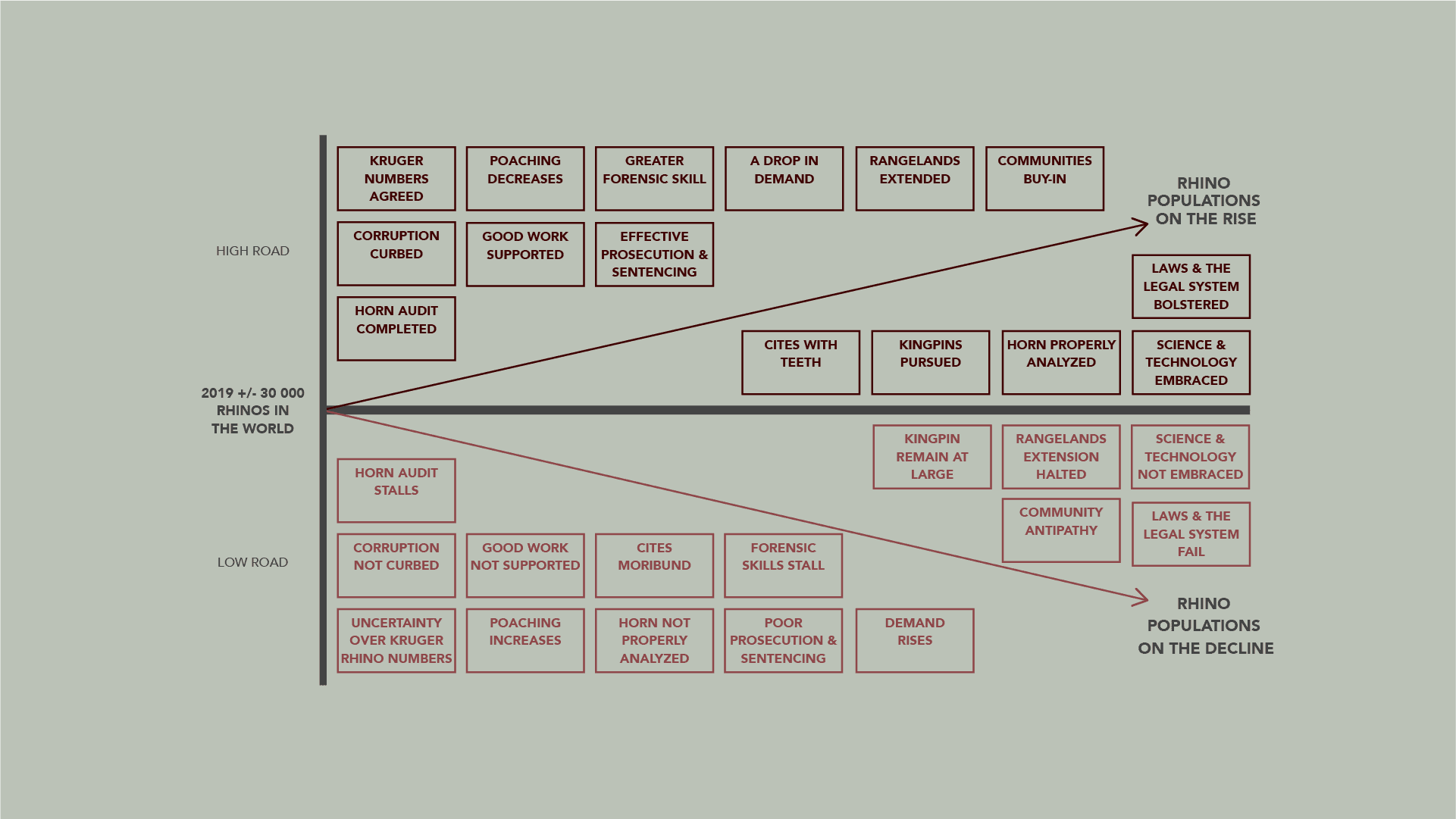 All horn stockpiles everywhere, in state and private hands, are independently audited, DNA profiled and entered into a UN-managed data base. This information is updated annually and is made publically available.

There is some progress at least in curbing corruption across all levels of society in range states, as well as in transit and end-user countries.

Independent surveys of rhino numbers in Kruger National Park are allowed, ending speculation around the “real” size of the populations in what is still the world’s greatest repository of African rhinos.

Anti-poaching units become more effective through the coordination of intelligence, increased training and the use of state of the art technology. The more frequent that the early detection of poachers and their apprehension takes place, the greater will be the disruption of supply lines.

Continuing effort is placed on raising funds internationally for the support of rhino conservation efforts. Critical is the assurance given to donors that their contributions will reach the well-run organizations and projects doing the best and most meaningful work on behalf of rhinos.

Investigating crime units receive improved training in managing crime scene management. This will feed into the prosecuting system, ensuring irrefutable evidence and making for quicker trials of alleged poachers and the sentencing of guilty parties.

Improved legal training specific to wildlife crime is added to better crime scene management and forensic evidence, ensuring successful prosecution and maximum sentences being applied to offenders. It has been suggested that special “rhino courts” be set up with legal specialists to expedite the legal process.

A Drop In Demand

Efforts continue through translocation and breeding programs, to establish new populations of all rhino species in some, if not all, range states in Africa and Asia.

Cooperation is developed between conservation authorities and local communities surrounding national parks, other reserves and private game areas. This is critical to the success of any conservation effort as amongst other. Mutual respect and trust are vital in such relationships, but for this to happen local communities must see the real and ongoing material benefit to them of having rhinos as their neighbors.

The perceived weaknesses in this important treaty are addressed and its administration receives the appropriate funding to ensure that it has “real teeth” in dealing with trafficking crimes.

Middlemen, the local kingpins that receive and pass on horn contraband from poachers, are rigorously pursued and prosecuted. The more these criminals are removed from the illegal trade hierarchy the greater will be the disruption of the supply chain.

A thorough, independent chemical investigation of rhino horn needs to take place. This is aimed once and for all at establishing whether or not rhino horn has any pharmacological and/or therapeutic properties.

Common strategies between environmental crime-fighting agencies around the world continue to be developed. Laws must be enforced that reflect a standard approach to the prosecution and sentencing of rhino horn traffickers no matter where they are apprehended. For example, South Africa and CITES need to put huge pressure on Mozambique, a known transit hub for illegal horn, to prosecute and sentence corrupt officials and trafficking kingpins.

State of the art advances in science and technology continue to be applied, particularly in the field of poacher interception at the stage before rhino lives are lost. Another among the many important efforts demanding progress is the improvement of IVF techniques. These need to become part of the conservation tool kit, not only for rhinos but other species in peril.

Corruption, lack of political will and stability, and funding constraints curb efforts to establish new populations of rhino species across historical distributions in Africa and Asia.

Sustained cooperation from local communities does not materialize and the people surrounding game areas become indifferent, or even antagonistic, towards conservation initiatives and particularly towards anti-poaching efforts.

The potential of science & technology to help deliver effective solutions is not widely realized and many links in the conservation chain are severely weakened as a result.

Common strategies are not developed between environmental crime-fighting agencies around the world and crime syndicates are quick to exploit weakness wherever they find them. The poaching supply line from South Africa through Mozambique remains open and largely unchallenged.

A proper horn audit of stockpiles is not completed and speculation about corruption abounds, undermining confidence in the apparatus of governments and other invested bodies.

Corruption cases are dealt with in desultory fashion and suspects are not rigorously pursued. This engenders a sense of impunity, encouraging new players into the trafficking chain.

Independent surveys of rhino numbers in Kruger National Park are not done, again leading to questions as to the integrity of population counts. Delayed release of population and poaching statistics further undermine confidence in state governance.

Fund-raising efforts falter, placing huge strain on well-run organizations and projects in Africa and Asia. This would be a body blow for rhino conservation, as so much of its impetus comes from donor funding.

Anti-poaching units fail to achieve and maintain effectiveness owing to a lack of funding and or resolve, and poaching again starts to rise.

The perceived weaknesses in this important treaty are not addressed, and confidence in its ability to meet today’s wildlife trade and trafficking challenges erodes.

A thorough, independent chemical investigation of rhino horn does not happen, and speculation as to pharmacological and/or therapeutic efficacy of horn remains in circulation.

Funding is not available for the development of forensic techniques and the training of investigative crime units. This compromises the prosecuting system.

Specialist “rhino courts” are not established and this, together with poorly gathered and presented evidence, impedes the power of courts to convict known criminals.

Public awareness strategies aimed at reducing demand in Asian societies, particularly Vietnam, fail to be adequately funded or supported and consumer numbers rise. More opportunities are created all along the supply chain.