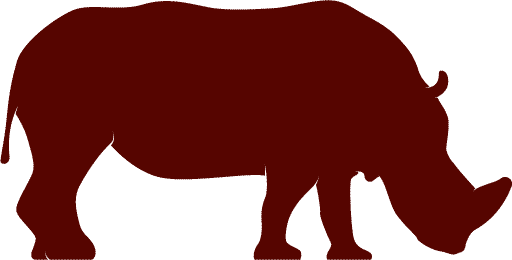 The Indian Rhino Rhinoceros unicornis is monotypic—no subspecies are included.

Historically, the Indian Rhino was widespread throughout the Ganges, Brahmaputra, and Indus River valleys, but it is now mostly restricted to several small conservation areas in northeastern India and Nepal. (See maps)

The single, somewhat stubby horn and deeply folded skin, giving the appearance of armor plating, are distinctive. It also has a prehensile upper lip, as do the other Asian species and the Black Rhino in Africa.

Not well known, but the Indian Rhino lives for 30–45 years in the wild. Females become sexually mature at about five years and around 10 years for males. Females give birth to a single calf every 2–3 years after a pregnancy of 15–16 months. Calves can drink as much as 40–60 pints (20–30 liters) of milk a day but start nibbling at vegetation after 3–5 months. They are only fully weaned after 18 months.

Although primarily a grazer, the Indian Rhino also eats various aquatic plants, fruit, shrubs, and smaller tree branches. As many as 183 plants make up its diet, and it will eat as much as one percent of its body weight daily. Indian Rhinos regularly visit mineral licks.

The Indian Rhino is an excellent swimmer and is pretty agile on land for an animal of its size. It can reach speeds of 25 mph (40 kph).

Snorts, honks, and roars are all part of the communication repertoire of 12 different sounds.

Mature males are solitary, occupying loosely defined overlapping, aggressively-defended territories. Fights between males are ferocious and can end in serious injury, even death. It is not their horns but the razor-sharp, tusk-like lower incisors that do the damage in such fights. Females are also solitary except when rearing young and moving in and out of male territories. Wallows, however, are frequently-visited meeting places and are often shared by several individuals. Common dung heaps, or middens, can be huge and serve as communication areas and boundary points between individuals.

Surviving populations live in conservation areas surrounded by intense human activity. Therefore, it is not surprising that they stray into nearby villages and raid farmlands and plantations where conflict occurs. Rhinos are responsible for several human fatalities in India and Nepal each year.

Listed as “Vulnerable” on the IUCN Red Data List. Listed on CITES Appendix I.

The Indian Rhino’s most significant threats are the fragmentation and encroachment of habitat and conflict with local communities. In 2013, poaching deaths rose to a recent high of 41, and although the rate has since fallen, poaching remains an ever-present threat. In many conservation areas where rhinos are found, the rhino population density is high. Although it is good that rhino numbers are still growing, conservationists are concerned that the high density might lead to lower breeding rates. Also, the confinement of sub-populations within small, separated parks could threaten genetic diversity.