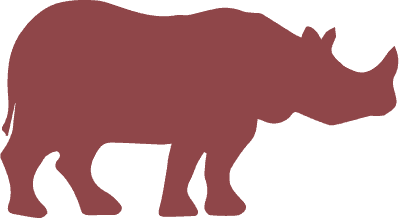 The current population of Javan Rhinos is estimated at about 75 individuals. The Asian Rhino Specialist Group (AsRSG) set the range at 65–68 in its briefing document for the CITES Cop 18 meeting held in September 2019.

The historical range of the Javan Rhino is uncertain, but it would have extended across a large part of Southeast Asia. It would have overlapped with the Indian Rhino in the far north and in the south with the Sumatran Rhino. It is thought to have been the most populous of the Asian rhinos but is now confined to a single location on the Ujung Kulon Peninsula at the far western tip of Java. (See maps)

Today the Javan Rhino is confined to lowland tropical rainforest, especially near water. Historically, however, its habitat would have extended across highland and lowland areas, including open mixed forest and grassland.

Males have a single horn, while females are often hornless (if present, it is much smaller than that of males). Although it has deeply folded skin, the folds are less pronounced than those of the Indian Rhino. The patterned skin has a scale-like appearance. It has a prehensile upper lip like the other Asian rhinos and the Black Rhino of Africa.

Longevity is uncertain, but the Javan Rhino probably lives from 30–40 years in the wild. Not much is known about its biology, but it is presumed similar to other rhino species.

Hundreds of plant species have been recorded as part of the Javan Rhino diet. However, the young shoots and twigs of a few common plants are favored. In Ujung Kulon National Park, where the only surviving population is found, the Javan Rhino is a browser, but it was probably also a grazer in its historical range. As with other Asian species, salt licks would have been an important source of essential minerals. There are no salt licks in Ujung Kulon, but rhinos have been seen drinking seawater, and it has been suggested that this behavior is an attempt to access the minerals they need.

The thick vegetation of its current habitat hampers rapid movement, but it would probably be as mobile as other rhino species in more open habitats. Like the Indian Rhino, it is also at home in aquatic environments.

The Javan Rhino is not very vocal and seems to rely more on urine, dung, and secretions from its foot glands for communicating with other individuals.

Males and females are solitary except when mating and nursing females. They are secretive and seldom seen. Male territories are large and slightly overlap, but they are not aggressively defended. Territories are marked with urine, feces, and scrapes. Female domains are much smaller and overlap considerably. Javan Rhinos love wallowing and spend much time covering themselves in thick mud. This helps maintain a constant body temperature and keep biting insects at bay.

As the only population is restricted to a single conservation area, human contact is limited to a few tourists lucky enough to see them and the guards of the park’s Rhino Protection Units.

Listed as “Critically Endangered” on the IUCN Red Data List. Listed on CITES Appendix I.

As with the Sumatran Rhino, the tiny population and restricted habitat hold the threat of inbreeding and the consequent loss of genetic diversity. Java (and the entire Malaysian Archipelago) is highly vulnerable to major volcanic eruptions and resultant tsunamis. The early 2019 activity of Anak Krakatau in the Sunda Strait near Ujung Kulon National Park could have proved disastrous for the Javan Rhino.