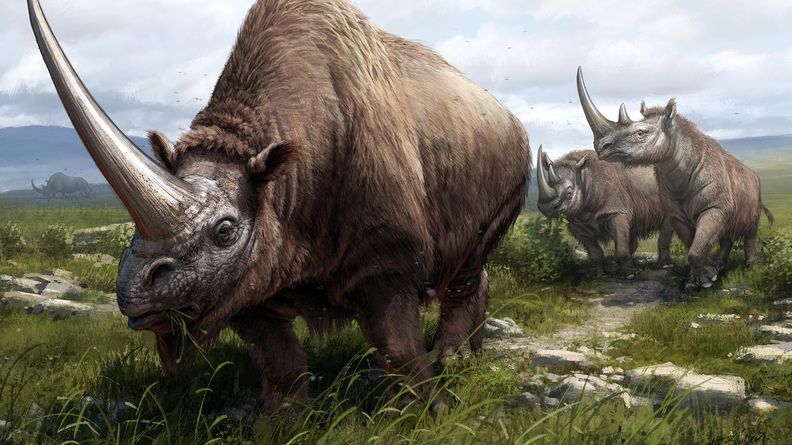 llustration of a paleoartist’s reconstruction of the three extinct rhinoceros species whose genomes were sequenced as part of the study. Image: Beth Zaiken / As originally published by GenomeWeb

Rhinoceroses generally have had low levels of genome-wide diversity during their evolution, according to a new genomic analysis that could have implications for conservation efforts.

An international team of researchers has sequenced the genomes of two living and three extinct rhinoceros species, which they compared with three already-sequenced extant rhinoceroses. While there were numerous rhino species prior to the Pleistocene Epoch, there are now five living species, all of which are highly endangered. Rhinoceroses today are found across Africa and Southeast Asia, but they were once also spread across the rest of Asia and Europe.

As they reported on Tuesday in the journal Cell, the researchers’ analysis enabled them to sort out a long-standing question of rhinoceros evolutionary history.

They additionally uncovered low levels of genetic diversity not only among modern rhinos but also among the ancient ones. In combination with their low population sizes, this suggests rhinoceroses might be adapted to low genetic diversity.

“Our results suggest that at least some of the explanation for the low genetic diversity seen in present-day species is a consequence of them simply being rhinos,” Love Dalén, a researcher at the Centre for Paleogenetics and the Swedish Museum of Natural History and a corresponding author of the study, said in an email. “However, our results also tentatively suggest that there have been additional losses of genetic diversity and increases in inbreeding levels in the last 100 years.”

For their study, the researchers examined the genomes of the black, white, Sumatran, Javan, greater one-horned, woolly, and Merck’s rhinoceros as well as the Siberian unicorn.

There have been three main hypotheses to explain how rhinoceroses are related. The horn hypothesis groups the two-horned species together, while the geographic hypothesis clusters the Asian species together. A third one suggests that the Sumatran rhino is a sister clade to other living rhinos.

“With only five living species, one would at a quick glance think that this question might be easy to resolve,” Dalén explained. “But part of the problem has been that the splits between the main branches in the rhinoceros family tree happened a very long time ago — 10 to 20 million years ago — and in relatively rapid succession.”

His team’s findings, though, support the geographic hypothesis. Through their phylogenetic analysis, they uncovered three major rhinoceros clades: one that includes the African rhinos; another with the Sumatran, Merck’s, and woolly rhinoceroses; and the third with the Rhinocerotinae subfamily of the Indian and Javan rhinoceroses. They additionally placed the Siberian unicorn as an outgroup to the Rhinocerotinae subfamily. The split between the African and Eurasian lineages occurred about 16 million years ago during the Miocene Epoch, according to their analysis.

As previous studies had noted low levels of genomic diversity among the black, white, and Sumatran rhinos, the researchers examined the genome-wide heterozygosity among their samples. They found that, in general, rhinos have low genetic diversity as compared to most other species. Modern rhinos, though, tended to have even lower diversity.

“I think the main conclusion one should draw from this is that one should not compare an endangered species’ genetic diversity with that from other distantly related species,” Dalén said. “Different species and species groups have different baseline levels of diversity due to their long-term life histories, mutation rates, ancient demographic events, etc.”

But he and his colleagues uncovered additional, recent declines in genetic diversity and increases in inbreeding among modern rhinos.

The findings could also guide conservation efforts. “Now we know that the low diversity we see in contemporary individuals may not be indicative of an inability to recover, but instead a natural state of rhinoceros,” Mick Westbury of the University of Copenhagen, a co-author of the study, said in a statement. “We can better guide recovery programs to focus on increasing population size rather than individual genetic diversity.”