By NewsroomAugust 30, 2021Science and technology
No Comments 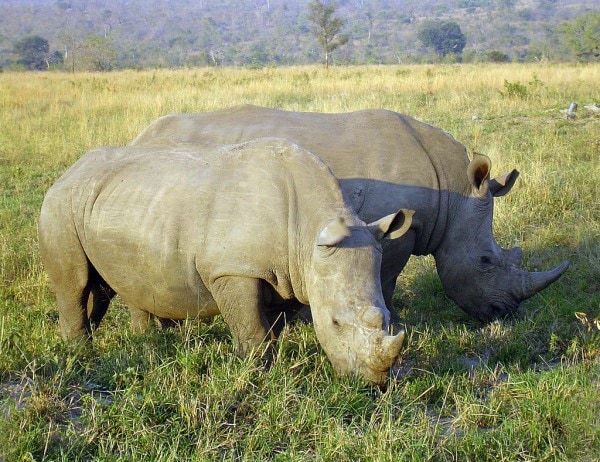 Rhino grazing together in a park in South Africa. Image: Wikimedia Commons.

Rhinoceros have been living on Earth for many years, yet only five species have survived to this age. This includes the Indian, Javan, Sumatran, and white and black rhinoceros.

According to Phys.org, most of the species of rhinoceros started to go extinct even before the Pleistocene era. A new study analyzed the genomes of five living rhino species and compared them with the three extinct rhinos to fill in the species’ evolutionary tree gap and gain insights into their conservation.

The study, titled “Ancient and Modern Genomes Unravel the Evolutionary History of the Rhinoceros Family,” published in the journal Cell, analyzes the genomes from all five living rhinos and three extinct rhino species.

Researchers of the study were studying different rhino species when they realized they could join forces with other colleagues to do a comparative study of all eight rhino species. However, it was not easy as the team encountered challenges when analyzing the genomes, given that only five of their species survived today.

Study author Shanlin Liu from China Agricultural University in Beijing, China, said their team confronted a big data problem. She pointed out that the genome data represented various data types because it came from modern and ancient rhino species. So, the team developed new analysis tools to consider those differences.

Love Dalén of the Centre for Palaeogenetics and the Swedish Museum of Natural History said their findings suggest that there is low genetic diversity in all eight species of rhinoceroses as part of their long-term history. She noted that this did not lead to increased health problems in the species due to inbreeding and disease-causing mutations.

She added that their analysis shows that the main branch of the family tree of rhinoceros is among geographic regions, wherein it is Africa versus Eurasia, and not between rhinos who have one horn versus those who have two horns.

As Science Focus reported, the study found that all eight species of rhinoceroses showed a slow decafrease in population over the past two million years. This could mean that rhinos adapt naturally to living with small populations that have low genetic diversity.

That theory explains the current trend of rhino populations who did not accumulate any disease-causing genetic mutations in the last century. This allowed rhinos to stay healthy despite the inbreeding and low genetic diversity in their populations.

Researchers think that the study could have positive implications for rhino conservation. They emphasized that programs designed to help rhino numbers should change their focus from increasing the genetic diversity to increasing their population sizes.

Save the Rhino reported that there are approximately 5,000 black rhinos while 18,000 white rhinos remaining in Africa. Meanwhile, Indian rhinos have only 3,500 in their population, and there are less than 100 Javan and Sumatran rhinos alive in the southeast Asian region.