By NewsroomAugust 20, 2019Anti-poaching
No Comments

Three adult rhinos and a 15-month-old calf were dehorned at the Thula Thula Game Reserve this week in an attempt to keep them safe from poachers.

Thula Thula Managing Director Françoise Anthony said they decided that after two 18-month-old rhinos were killed for their horns in their orphanage two years ago, they would try their best to not have any more animals suffer at the hands of poachers.

‘Two of the rhinos we currently have are 10 years old and they came to us as babies after their mother was killed by poachers.

‘We have since brought in two more female rhinos with the hopes of them reproducing and growing our population.

‘We hired extensive security to ensure our rhinos are kept safe.

‘Ten years ago, we lost a rhino to poachers and then two years ago we were devastated when our two baby rhinos were killed just for their tiny horns,’ said Françoise. 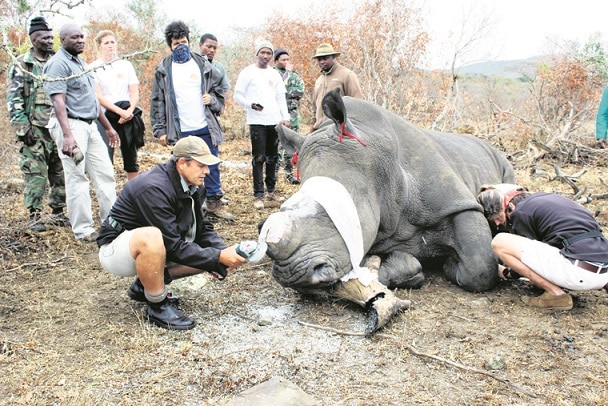 Original photo from the Zululand Observer: Four Rhinos were dehorned in a painless process at the Thula Thula Game Reserve on Tuesday.

Rhino poaching, which has rapidly escalated in recent years is driven by the demand for their horns particularly in Asian countries where the horn is used for medicinal purposes, as a display of wealth as well as an aphrodisiac.

This is despite studies that show the horn is mostly made up of keratin, the protein that makes up hair and nails, and that it does not possess medicinal power.

During the dehorning, the animals were tranquilised before their eyes were covered with white clothe while their horns were sawn off and polished.

It was not long after the procedure that the rhinos were able to wake up and continue as they normally would.

Anthony explained that the dehorning process was meant to be as painless as possible.

‘The rhinos are not supposed to feel anything during the procedure and it takes less than 10 minutes.

They also do not really have to adapt because here the rhinos do not have to use their horns to fight off any predators.’

Despite the calm procedure, many who helped and witnessed the dehorning were left in tears.
London tourist, Jo Malone vowed to financially support the conservation efforts at Thula Thula, saying that no animal should have to suffer under the hands of humans.

‘People need to see such things for themselves because we lack awareness of what animals are going through. We need to use our voices to speak out for these Rhinos before it is too late.’