By NewsroomJanuary 19, 2021Science and technology
No Comments 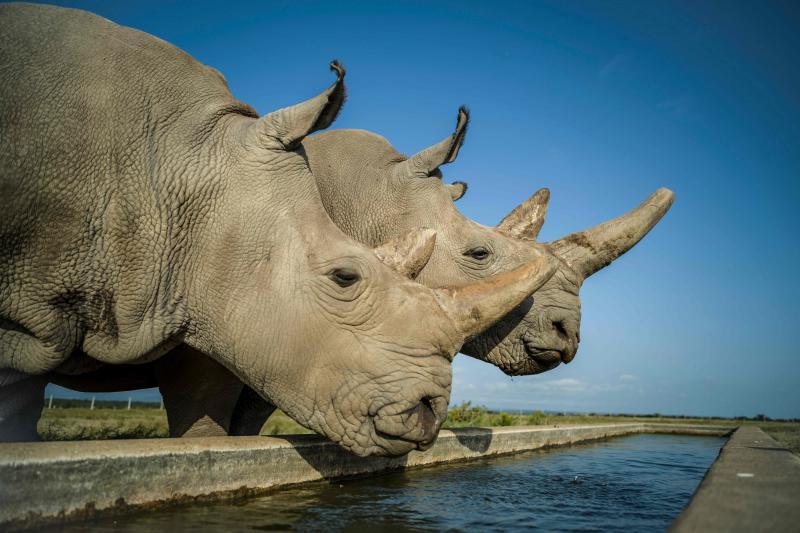 Ol Pejeta Conservancy has admitted that one of only two known surviving northern white rhinos is in poor health.

The conservancy, which is home to the two last northern whites, both female, said the deteriorating health of the 31-year-old rhino, nicknamed Najin, was a warning of how close the species is to extinction.

Additionally, the rhino’s ill health is a stumbling block to global efforts to save the near-extinct species.

The statement followed the announcement of successful creation of two embryos from eggs previously harvested from the younger of the two rhinos, nicknamed Fatu, in December. Najin is Fatu’s mother.

The egg collection was done on December 13 by a team from the Leibniz Institute for Zoo and Wildlife Research (Leibniz-IZW), Safari Park Dv?r Králové, Kenya Wildlife Service and Ol Pejeta Conservancy.

The eggs were then transported to Avantea Laboratory in Italy for fertilisation with preserved semen from a deceased male rhino.

They were preserved on Christmas Eve last year when they reached the blastocyst stage suitable for freezing.

So far, there are five viable northern white rhino embryos after three others were produced in 2019.

“The creation of two more embryos nourishes the hope that despite challenges and delays caused by Covid-19, the northern white rhino can still be saved. The next steps in the programme are already underway,” said Ol Pejeta Conservancy CEO Richard Vigne in a statement.

He added that despite this “fantastic news”, Najin’s ill health deals a blow to conservation efforts to prevent the complete extinction of the northern whites as it brings home the reality that there may soon only be Fatu left.

While scientists have been racing to save the species, Covid-19 affected the process of egg harvesting and fertilisation last year, further delaying the production of new embryos to add to those previously created.

“The successful embryo creation in December 2020 is a conciliatory end to a challenging year for the northern white rhino rescue programme and the world of conservation at large. The procedures scheduled for March and June had to be cancelled or postponed owing to the Covid-19 pandemic,” said the conservancy.

On August 18, 2020, the conservancy noted that the team was finally able to repeat the egg harvesting, and from both rhinos, but registered disappointing results after no embryos were created.

The reproduction specialists concluded that the unintended span of nearly nine months between procedures affected results.

The successful procedures in December that led to creation of embryos, according to the experts, proved that a regular rhythm of repeated oocyte collection every three to four months was key to their success

Before Sudan’s death, scientists had harvested his semen, alongside those of other male northern white rhinos before their death.

Najin and Fatu had reproductive challenges, so scientists opted to employ assisted reproductive techniques to help them breed after they failed to do so naturally.

Once harvested, the eggs were airlifted immediately to Avantea labs in Italy.

With the announcement of the successful development of two more embryos, concern now turns to Najin’s poor health.

“In a few years, we will probably be left with only Fatu, the last northern white rhino on the planet, a reminder of how the human race continues to ravage the biodiversity of our planet and how we must continue to move with all possible speed to halt and reverse the global environmental decline that we are witnessing,” said Vigne.

During the last egg harvesting that was carried out in December, scientists from Europe travelled to Kenya and extracted 14 eggs from Fatu.

They, however, did not collect any eggs from Najin as the 31-year-old rhino has a large tumour in her abdomen “which at this point does not cause acute health problems but may hamper the functionality of reproductive organs”, according to the conservancy.

However, in the August 18 exercise last year, the team of scientists harvested eggs from both rhinos.

“Unfortunately, no oocytes were retrieved from Najin, who is Fatu’s mother. The team of experts believe that Najin’s age and/or health issues could affect the quality of her egg cells,” Ol Pejeta noted.

Najin’s exit means that Fatu would be the last survivor of her species, as scientists bank on artificial reproductive techniques to reverse the northern whites’ extinction story.

“The progress so far in the northern white rhino assisted reproduction project is very encouraging, and we look forward to the transfer of the already developed embryos into southern white rhino surrogate females here at Ol Pejeta Conservancy,” said Tourism and Wildlife Cabinet Secretary Najib Balala in a past statement.

“This project should galvanise the world’s attention to the plight of endangered species and make us avoid actions that undermine law enforcement and fuel demand for the rhino horn.”