By NewsroomFebruary 13, 2020Conservation, Education, Science and technology
No Comments

Scientists behind a study in a recent issue of the academic journal EcoHealth discovered that bacteria samples found in the endangered animals in Ruma National Park, a protected area on the shores of Lake Victoria, had developed alarming levels of antibiotic resistance.

The rhinos appear to have become unexpected casualties of global overuse of the drugs. Resistance to them is growing because people take the drugs for non-bacterial diseases; don’t finish drug courses, allowing bacteria to recover and adapt; and because many farmers overuse the medicines on livestock.

Antibiotic use and abuse in Kenya has been rampant for decades, elevating levels of drug-resistant bacteria in people, livestock and now wildlife. 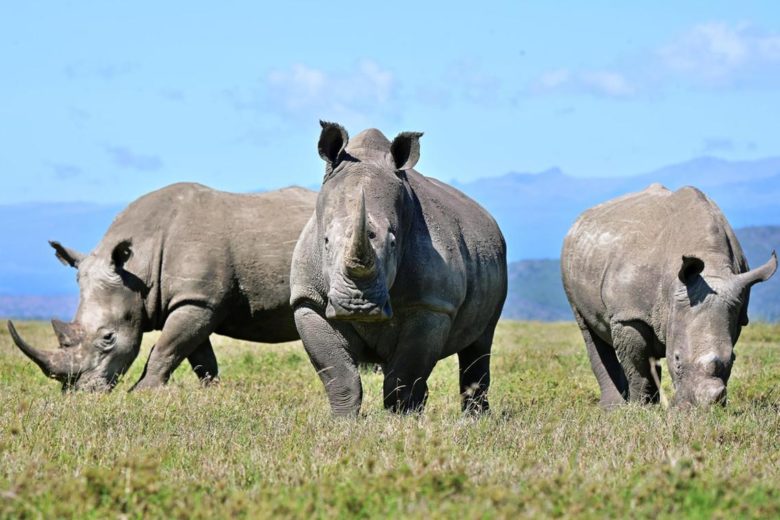 Original photo as published by The National: A trio of white rhinoceros grazing at Ol-Pejeta conservancy at Laikipia’s county headquarters, Nanyuki. – Ol-Pejeta, a private conservancy on Kenya’s Laikipia plateau that shelters, among other endangered giants, the only two northern white rhinos left anywhere on earth, launched what it calls the world’s first wildlife tech lab, that develops the latest technological weaponry to combat poaching. AFP

They isolated samples of E. coli in both rhino and human waste and studied how resistant they were to eight of the most commonly used antibiotics: ampicillin, gentamicin, tetracycline, cotrimoxazole, chloramphenicol, ceftriaxone, amoxycillin/clavulanic acid and erythromycin.

Resistance levels in the bacteria found in rhinos and that found in humans were comparable for four of the antibiotics. The bacteria in rhinos was more resistant than that in humans for two of them.

That’s a problem because rhinos – already under threat from poaching – are susceptible to the bacterial disease bovine tuberculosis, researchers in South Africa’s Kruger National Park have found. Antibiotic resistance could make treatment harder.

“If they are sick, they need to be treated – and so what kind of medication can be used on these animals?” Kebenei said in the university lab, as his adviser and co-author, zoology professor Patrick Onyango, looked on.

Rhinos are already critically endangered. Only about 29,000 remain alive, says the International Rhino Foundation. About 5 per cent of them are in Kenya.

Onyango said that although attention was focused on poaching, antibiotic resistant infections are a new and insidious threat.

“There are people who are hawking antibiotics in bus stations,” said David Onyango, a lecturer in Maseno University’s zoology department who co-authored the study. “There is no proper policy and regulation on their use.”