Rhinos on the brink as poachers run riot in Botswana

By NewsroomDecember 19, 2019Anti-poaching, Conservation
No Comments

Botswana’s tiny population of rhinoceroses is being “hammered” towards extinction by poachers in a surge of slaughter that is being left unchallenged by the government, conservationists have said.

Their warning came after the deaths of two southern white rhinos were reported yesterday. Their carcasses were found last week, minus horns, on Chief’s Island in the northern Okavango Delta, home to the country’s fewer than 400 rhinos.

Conservationists say 17 other rhinos have been illegally killed since April for their horns, which can fetch $50,000 a kilogram. The poaching rate had been about one a month. The rise in killings threatens to destroy Botswana’s efforts to reintroduce the animals, which had been wiped out there until a herd was imported at the turn of the century. 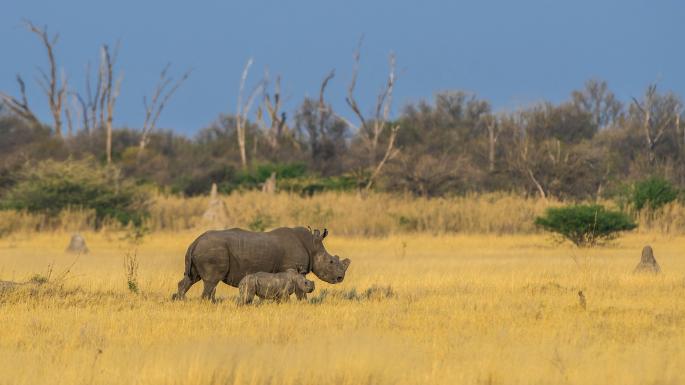 Original photo as published by The Times: Conservationists say 17 rhinos have been illegally killed since April for their horns. (Source: Alamy)

Poaching has soared since the election of President Masisi in October. He lifted a five-year hunting ban on elephants, saying that the population needed to be controlled.

Ross Harvey, an independent economist in South Africa who specialises in wildlife, said that drought and the failure of Mr Masisi’s government to stop the poachers had created a “perfect storm” that threatened a new extirpation. “Rhinos are being hammered in Botswana,” he said. “Their reintroduction was a major win but the Masisi government appears to have intentionally undermined those efforts. Wildlife is no longer being managed and the risk-reward ratio for poachers has changed.

“In the absence of law enforcement we are losing rhinos but also the profound effort to reintroduce them. Chief’s Island was well protected and surrounded by water but much of that is gone due to drought. It’s a free-for-all for poachers.”

The southern white is the only rhino species not on the endangered list but it has borne the brunt of poaching in recent years. Southern whites form the majority of the herd in Botswana, which also has a few critically endangered black rhinos. There are only three northern white rhinos, a distinct subspecies, left in the world.

Mmadi Reuben, of the wildlife department, admitted that at the increased rate of poaching “there will be no rhinos in Botswana in a year or two”. The government did not respond to repeated requests for comment.