Rhinos: scientists are hanging them upside-down from helicopters – here’s why

By NewsroomOctober 4, 2021Science and technology
No Comments 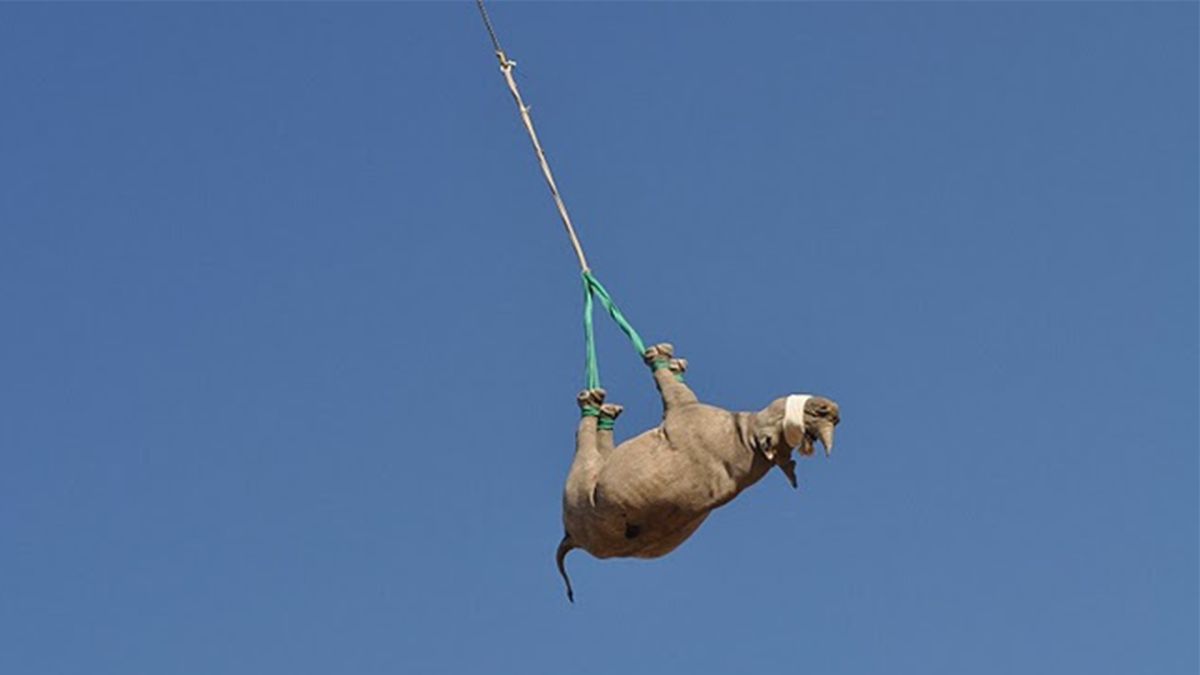 A rhino being airlifted via a helicopter. Image: Namibian Environmental Ministry.

A recent study that suspended rhinos upside-down by their ankles from a helicopter must have been a shoe-in for the award’s judges, securing the 2021 Ig Nobel Transportation Prize. But while hanging rhinos produce spectacularly absurd photographs, behind the award and the study lies a serious business.

Rhinos are in trouble. There are five species of rhino, and all are endangered. The three-tonne white rhino is the least endangered, yet there are still only an estimated 20,000 of them left in the wild. The species hung upside-down in the study is the black rhino, weighing in at 1.5 tonnes and with an estimated population of just 5,000.

In attempts to protect rhino populations, conservationists have tried dehorning (to try to make rhinos less desirable to poachers), translocation (moving rhinos, including upside-down via helicopter), and even resurrection (creating embryos from the eggs and sperm, or even the DNA, of dead individuals).

We translocate rhinos because they live within guarded, fenced areas to keep them monitored – and protected, in theory, from poaching for rhino horn, their main threat. But this prevents animals from colonising new areas, recolonising vacant areas, or mixing genes between areas.

So conservationists have to lend a helping hand – or helicopter – to place rhinos into new regions. But until the Ig Nobel Prize-winning study, we weren’t entirely sure whether this upside-down transportation was actually safe for the rhinos involved.

The capture and translocation of large mammals can be dangerous and disruptive to the welfare of the animals concerned. Big African mammals, including elephants, giraffes, and rhinos, are physiologically sensitive. The entire capture and translocation process can result in psychological and physiological stress. If such animals are given too great a tranquiliser drug dose, or are left in the wrong position under tranquilisation, they can die.

Historically, wildlife translocation methods were informal and experimental, with successful methods spreading by word of mouth. Increasingly, this ad-hoc approach has been replaced by formal scientific research, either supporting perceived wisdom, or providing novel innovations.

So it’s important, for animal health and welfare reasons alone, for the procedures applied to catch and move big animals to be as safe and non-disruptive as possible.

For a number of years, African rhinos have been translocated by hanging them upside-down suspended from a helicopter, blindfolded and under tranquilisation. As well as enabling the capture and short-distance transfer of rhinos from areas inaccessible by road, transport by helicopter can mean shorter journey times, so it can be preferable for the rhino where it’s practical to do so.

But no one had ever established whether hanging upside-down is harmful to rhinos. Sure, rhinos appear fine when woken up at their final destination – but are they really OK thereafter?

This is where science comes in. It might sound funny to deliberately hang 12 black rhinos upside-down for 10 minutes just to monitor their physiology. But if nobody does the research, nobody knows whether it’s a safe way to transport an endangered animal.

The Ig Noble Prize-winning study compared the respiratory function and metabolic effects of rhinos when they were hung by their ankles to when the same animals were lying on their sides. The researchers found that the respiratory efficiency of rhinos hung upside-down is, if anything, slightly better than when rhinos are laid on their side during tranquilisation. So, the process is affirmed as at least as good as traditional methods of transport.

I have been involved in numerous white rhino capture and translocation operations in South Africa for my own research: collecting blood and saliva samples to evaluate physiological stress associated with capture.

The teams that I worked with also used helicopters, but only to dart the rhino with a tranquiliser from the air. The rhinos were then woken up as soon as possible before walking them, blindfolded and ear muffed, onto crates for road transportation by truck to locations many hours away. During long-distance rhino transportation, it’s neither economical nor healthy for the rhino to remain tranquilised – so road transport is preferred.

While being up close to such impressive beasts is humbling, and the capture experience somewhat exciting, my motivation for being there was the science: collecting data on the effects of capture, to ultimately inform and improve wildlife conservation.

Nevertheless, I always felt a sadness that we have to put these sensitive and gentle giants through such an unnatural process in the first place. But unfortunately we have no choice.

If we’re to effectively save endangered species, we can’t simply leave them alone. They need to be managed, and often that means moving them to where they’re safer from poaching, or to new areas to try to spread the population and diversify locally inbred populations.

We want such animals to survive the capture and translocation procedure, and to have as strong and healthy immune and reproductive systems as possible on their release.

Achieving that needs science. And if that science involves hanging rhinos upside-down, or other apparently weird and amusing research, let’s do it. The extinction of wildlife is no laughing matter, even if it throws up the odd opportunity to laugh as we learn.