By NewsroomSeptember 16, 2019Conservation, Rescue and rehab
No Comments

This famous quote of Mark Twain rings true when it comes to Ruby, a purebred golden bloodhound who has a very special job; to sniff out orphaned baby rhinos.

Ruby arrived in South Africa in late July, after 18 months of intensive training in Texas, USA. Ruby will join the Southern African Wildlife College’s (SAWC) K9 unit and its accomplished team of counter-poaching hounds outside Hoedspruit.

Ruby was hand-picked by expert dog trainers in Texas. They have worked with her exceptional nose to ensure she is able to sniff out orphaned baby rhinos. Orphaned rhinos often wander for days, dehydrated and vulnerable to predators, when their mothers are shot for their horns. 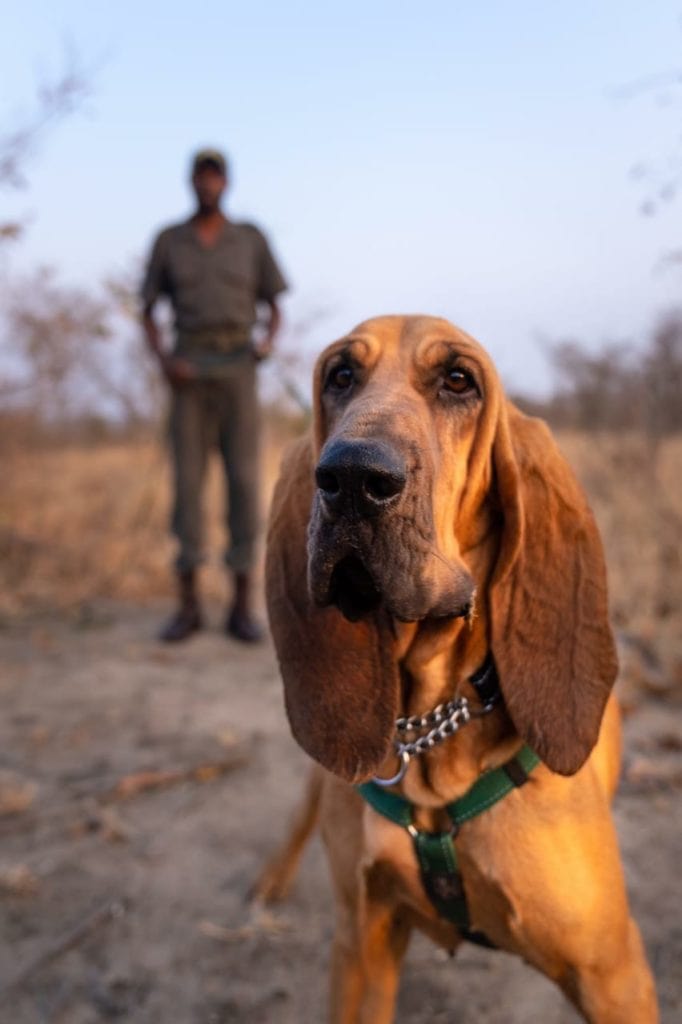 Saving them is a priority, and all involved are very excited in the field.

“Using the scent of captive rhinos in the United States, her trainers have no doubt she will thrive in her new environment in the Greater Kruger Park,” said the college CEO, Theresa Sowry, who was on hand to welcome the new arrival.

Johan van Straaten, dog master at the SAWC’s K9 unit, said: “Not unlike the rhino orphans she will be tracking, Ruby is a sensitive soul. She is super bright and has a very curious nature. When she discovers anything new, or if anything puzzles her, she gets a serious frown on her forehead.”

He added that Ruby loves her food and will do anything for a pellet of dog food or two.

“She is building more and more confidence in the bush on a daily basis and is showing a great deal of potential in terms of what we require from her as a service dog. She is a tracking dog, companion and happy soul.”

The college’s K9 Unit has made a significant impact on the success of counter-poaching operations, particularly since the arrival of its free-tracking pack dogs, also originally from Texas.

Ruby, being trained specifically to track the scent of rhino calves, will only amplify the success of the unit in the counter-poaching field.

The SAWC extended its sincere gratitude to the Ivan Carter Wildlife Conservation Alliance for their continued support, and who generously sponsored Ruby’s safe travel from Texas to South Africa.