Rumble in the jungle: an ear to the ground can tell us how elephants are faring in the wild

By NewsroomJuly 19, 2021Science and technology
No Comments 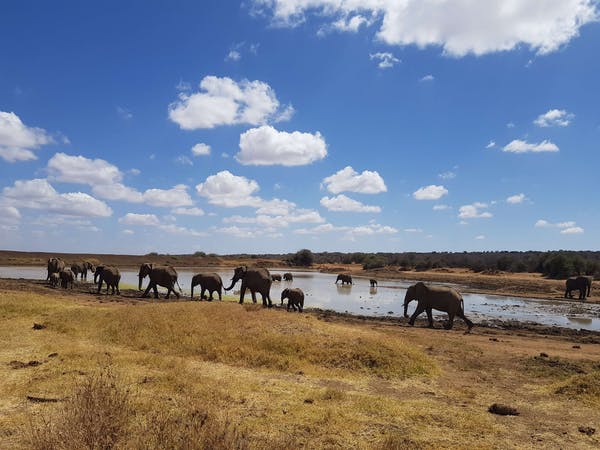 On the move: a herd of elephants leaving the watering hole. Image: As originally published by The Conversation.

African elephants can be found roaming the forests and grasslands of 37 countries across the continent. But sadly, these sentient and intelligent animals are rapidly declining, and were recently declared endangered.

For these remaining elephants to find each other, they make a variety of vocal noises to greet and warn each other, or to woo potential mates. Some of their vocalisations, which are called rumbles, are very low-pitched. So low in fact that humans can barely hear them. Due to the firm stance and weight of the elephants (which can reach 6,000kg), these waves travel not only through the air but also into the ground.

Elephants are thought to communicate over large distances – up to several kilometres in some cases. But it hasn’t been clear to scientists how important the seismic vibrations of their rumbles are in these long-distance chats. Is it just a coincidence that these sounds travel so far through the ground? Or is it something elephants actively exploit to stay in touch?

We wanted to find out. By deciphering the hidden information in these rumbles, we hoped they might also help us study and track elephants in future.

Working at Mpala Research Center in Kenya with computer scientists, earth scientists, conservationists and biologists, we set up microphones and seismometers around a watering hole known to be frequented by elephants. Seismometers pick up small underground vibrations and are typically used to measure earthquakes and explosions, some of which can be detected on the other side of the globe.

For the first time ever, we found it was possible to accurately locate elephants by measuring vibrations in the ground caused by their low-pitched rumbles. Our devices recorded the rumbles they made at distances of up to 500 metres.

Comparing the signals at all the seismometers, we could estimate the animal’s location with an average accuracy of just a few metres. Surprisingly, the seismic sensors were slightly more accurate in pinpointing the elephants than the microphones. It’s quite common for scientists to track species using acoustic technology, but getting better results with signals through the ground could open a new way of monitoring wildlife.

The future of wildlife monitoring

It’s unknown how exactly elephants pick up these vibrations and how they decipher their meaning. But our study suggests that the seismic rumbles could announce the location of the vocalising animal to other elephants far away, despite the thick layers of earth that these waves pass through.

This is helpful, as it’s important to know whether or not elephants are present in protected areas, or if they’ve wandered into places where they might be in danger, such as unguarded territories or towns and villages. Knowing this could allow rangers to respond quicker and prevent poaching, as well as prevent other kinds of conflict erupting between elephants and people.

Seismic monitoring could even be used to monitor hoofed animals like endangered species of giraffe and zebras. The seismic vibrations of their footsteps could help scientists study their group behaviour and how these species interact with their environment, without needing to tag them.

Previous work has shown that seismic recordings can accurately differentiate between the sounds made by elephants walking and their vocalisations. In future work, we hope to use this to develop AI algorithms that can detect what kind of wildlife is passing close to these sensors and what they are up to. This could help us monitor threatened or endangered species, count populations, and learn more about their movement and fascinating social behaviours.