SANParks Airwing among those honoured at Rhino Conservation Awards 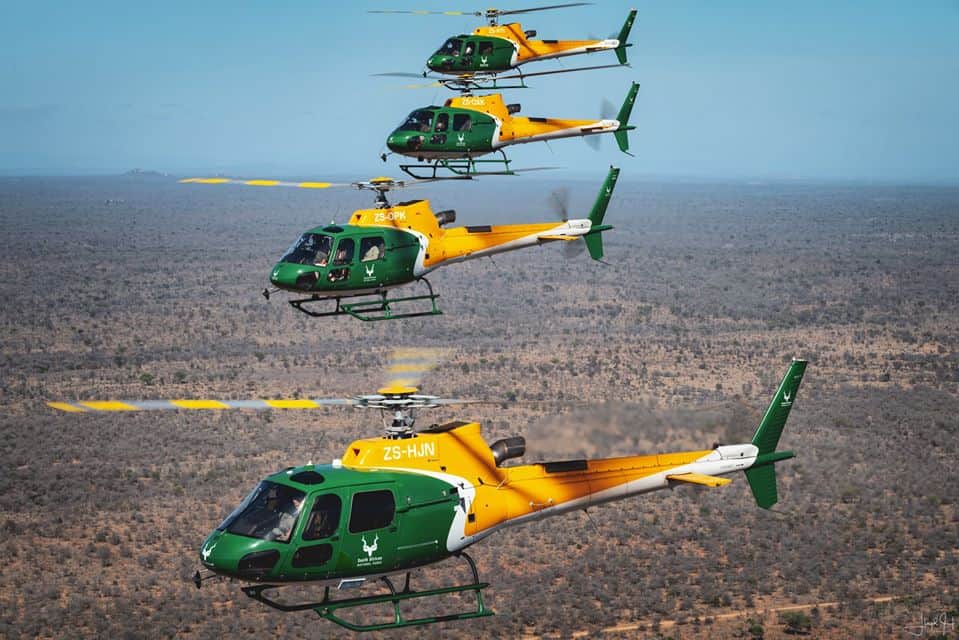 The SANParks Airwing, in conjunction with the various other anti-poaching teams, Special Rangers, the SANDF and the SAPS have evolved into a focused and dedicated anti-poaching support and anti-poaching response role in the Kruger National Park.

SANParks’ Kruger National Park Airwing has been named as the Best Conservation Practitioner at the annual Rhino Conservation Awards announced on Friday 31 July to coincide with World Ranger Day.

The awards are hosted in collaboration with the Game Rangers’ Association of Africa and celebrate the people and organisations who work to reduce the threats and increase the sustainability of conservation efforts in Africa.

Airwings Works in Support of Rangers and Vets

The citation for the Airwing notes that: “This dedicated team of committed professionals work tirelessly to support rangers, veterinarians and researchers in protecting, saving, conserving and monitoring endangered species within the Kruger National Park and neighbouring protected areas.

It adds: “These pilots and their support staff are instrumental in many of the counter-poaching successes in the area.”

According to the SANParks website, the Airwing, in conjunction with the various other anti-poaching teams, Special Rangers, the SANDF and the SAPS have evolved into a focused and dedicated anti-poaching support and anti-poaching response role in the Kruger National Park.

“Because of his effective monitoring and data collection skills, Samuel has made a significant impact on the increase of both giraffe and lion populations in the Kidepo Valley National Park,” his citation reads.

“He is now conducting habitat assessments for the reintroduction of rhino into Kidepo, and other translocations of wildlife to ensure the conservation of these key species.”

The award for the Best Game Ranger went to Don English of South African National Parks for his outstanding leadership in the Kruger National Park.

“Against all odds, through sheer tenacity and persistence and with the support of his ranger teams, he has managed to lower rhino-poaching activities year-on-year in the Intensive Protection Zone (IPZ), the judges said.

Best Conservation Supporter went to Lynne Taylor of The Tashinga Initiative, which works to protect wildlife in the Zambezi Valley and operates in close liaison with the Zimbabwe Parks and Wildlife Management Authority.

“Lynne’s targeted initiatives, ensuring rangers receive the support necessary to perform optimally, have transformed the well-being and operational capabilities of the rangers in the Zambezi Valley. This enables them to function effectively and supports their extraordinary work in conservation and on-going protection of threatened species in Zimbabwe,” the judges noted.

Prince Albert II of Monaco Sends His Thanks

“What better way to celebrate World Ranger Day than recognising the incredible efforts of these rangers and those who support them, said Andrew Campbell, Chief Executive Officer of the Game Rangers Association of Africa.

The Patron of the Rhino Conservation Awards is Prince Albert II of Monaco.

In a message, the prince stated: “I’d like to say how deeply grateful I am to all these men and women. And I would also like to say that your work goes beyond the individual animals you protect and save. You are defending the rights of nature faced with humanities destructive and irresponsible greed.”