By NewsroomApril 16, 2021Communities, Conservation
No Comments 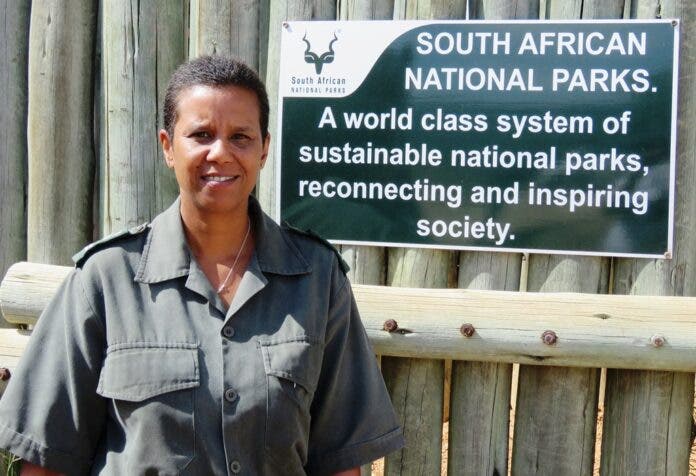 The Kruger National Park (KNP) has made history by appointing its first ever female Head Ranger, Cathy Dreyer… who is affectionately known as the ‘Rhino Whisperer’. Dreyer has an exemplary record in conservation management – particularly with rhino (which is crucial for the Kruger), as well as in law enforcement, people and strategic management competencies.

Dreyer starts her new position on 1 May 2021, replacing Ken Maggs who was with SANParks for nearly four decades and has retired.

Breaking barriers and becoming the Kruger’s first female head ranger is nothing new for Dreyer. One of her many accomplishments includes being the first female – and the first South African – recipient of the Tusk Award for Conservation in Africa, which was presented to her by Sir David Attenborough in London in 2016. The Award is given to an individual who has been judged to be an emerging leader in conservation in Africa and in recognition of their outstanding contribution and considerable successes in their chosen field. Dreyer says meeting Sir Attenborough was one of the most memorable experiences of her life.

Dreyer is currently the Conservation Manager at Addo Elephant National Park (AENP) in the Eastern Cape, responsible for both terrestrial and marine areas. It’s where her career began almost 20 years ago, but not where she has remained the last couple of decades.

Before moving to Addo, she was based in the KNP contributing to the protection and conservation of black rhino in the Intensive Protection Zone (IPZ) of the Park.

She coordinated and participated in the implementation of aerial surveillance; and was also instrumental in drawing up protection strategies and patrol tactics aimed at protecting black rhino in the KNP. Prior to this, Dreyer was employed by the Eastern Cape Parks and Tourism Agency as the Conservation Manager for the Great Fish River Nature Reserve home to one of the key black rhino populations in South Africa. She has unsurprisingly won many SANParks’ achievement awards.

Dreyer’s appointment comes soon after a successful strategy session was held in March with stakeholders and employees on preparing a Rhino Implementation Plan aimed at arresting the decline of the rhino population with KNP.

The Managing Executive of the KNP, Gareth Coleman congratulated Dreyer on her new appointment saying: “We are looking forward to welcoming Cathy back to the KNP. She is no stranger to the challenges faced by the Ranger corps in conservation management and fighting wildlife crime. She brings with her a wealth of conservation management experience and in conserving rhinos in particular. She has proven herself as a dedicated conservationist and a law enforcement officer.”

He added: “SANParks is currently preoccupied with developing effective management strategies to protect our Rhino population and to more effectively manage conservation and wildlife crime in the park in general. A Turnaround Plan – which addresses these and other key security, infrastructure and human capital challenges is being widely canvassed and consulted upon. Cathy will be key in driving these changes. We know that she will bring new energy, ideas and passion to our dedicated team within the Park.”

A joyful Dreyer said: “I am incredibly humbled by this opportunity, particularly at a time when the Kruger National Park is vigorously and earnestly working on its Turnaround Plan. Leadership is a privilege and I look forward to working alongside the dedicated, committed and passionate Ranger corps and conservation management teams in the Park.”