By NewsroomMay 25, 2020Uncategorized
No Comments

The legal trade in wildlife between SA and China is extensive and often corrupt, with glaring violations overlooked by authorities and benefits flowing to a few wealthy traders. It’s also acting as a cover for illicit trade.

This is documented in an extensive, meticulous report by Ban Animal Trading and the EMS Foundation — the outcome of four years of research.

The report says photos taken at Chinese importing centres show barren enclosures that “tell their own story of animal welfare violation and naked greed” despite the danger of Covid-type diseases.

The authors found that export permits frequently list fake destinations and that the issuing of permits under the Convention on International Trade in Endangered Species of Wild Fauna and Flora (CITES) is so lax it’s almost nonexistent.

As a result, wild animals are subjected to cruel and degrading conditions when captured, bred, transported, displayed in Chinese “theme parks” or used in scientific experiments. Their welfare is being ignored.

Given that the trade in wildlife has triggered a global pandemic, says the report, this is extremely worrying, threatening not only the lives of animals but of humans too. Infectious zoonotic (transmitted from animals to people) disease outbreaks have increased dramatically in the past 30 years. 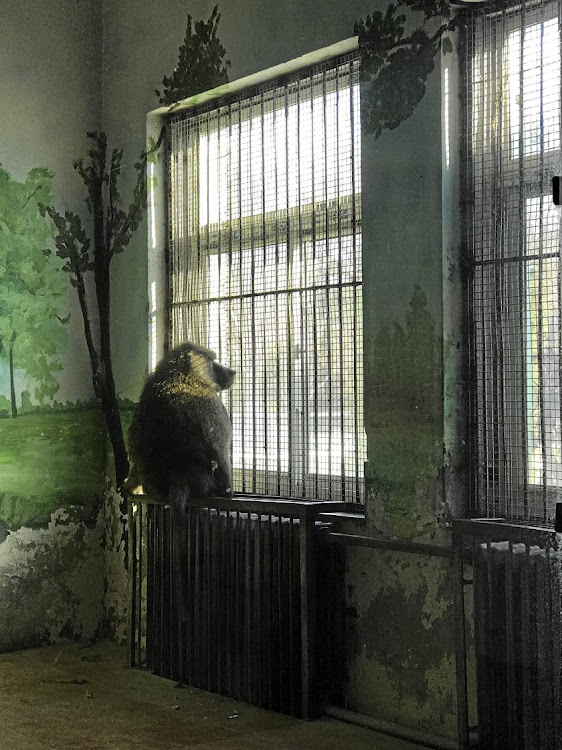 A lonely chacma baboon stares out the window of his ‘hok’ at Tianjin Zoo. Image: Karl Ammann

The most likely causes are commercialisation through exploitation of wildlife.

According to the report, “habitat loss, global travel and a persistent and growing appetite for wild tastes and exotic products has created a perfect storm for the next human pandemic”.

The CITES regulatory system, it says, has created a false sense of security for those who believe the international trade in wildlife is justified, sustainable and educational — and contributes to conservation.

The report, which is based on investigations in China, open-source research and information obtained from governmental and nongovernmental sources, shines a glaring spotlight on SA’s “legal” trade in live wild animals with China.

This trade, it says, is “riddled with irregularities” with “gaping loopholes” in the CITES permitting system. These include:

• Illegal shipments masquerading as legal exports of wildlife species classified as threatened by extinction (Appendix I) and endangered (Appendix II) by CITES;

• Brokering and wholesale companies and zoos implicated in the trafficking of wild-caught CITES Appendix I-listed species;

• The sale of CITES-listed species to theme and amusement parks, circuses, laboratories and zoos and so-called safari parks in violation of CITES rules;

• Untraceable destinations, importers and addresses despite these being required in CITES permits;

• Enforcement negligence, particularly in relation to likely false declarations made by traders, agents and exporters;

• Animals traded being untraceable after export;

• An intertwining of the legal local and global permit system with illegal wildlife trade. 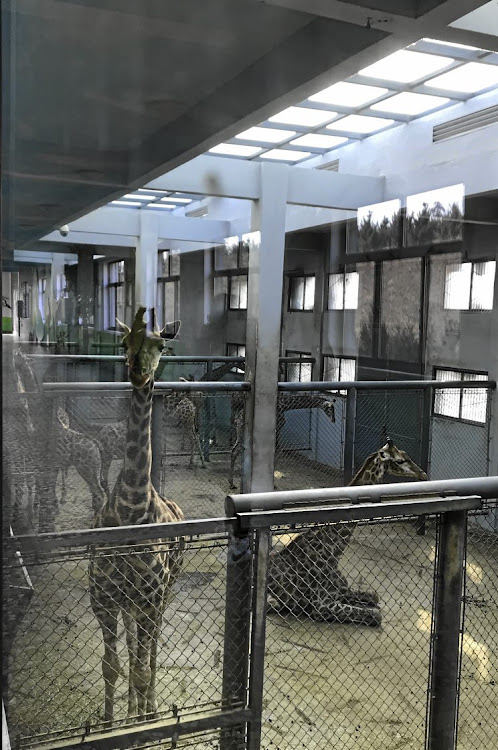 Some of the many young giraffes at Jinan Zoo in Shandong province. Image: Karl Ammann

“The repetitive box-ticking exercise that defines CITES is, in a very real sense, dangerous because it creates the illusion of a well-controlled system of compliance, efficiency and verification — and therefore protection,” the report notes.

SA’s policies and procedures actively promote this convergence. For these reasons, “transnational wildlife trafficking networks and crimes perpetrated against wild animals cannot be disrupted without focusing on the entire supply and demand chain of the so-called ‘legal’ trade”.

The details that back these claims are shocking and demand the urgent attention of the department of environment, fisheries & forestry (DEFF). The report lists a litany of bad practices, questionable decisions and shady deals.

SA is the largest exporter in Africa of live wild animals to Asia, but authorities repeatedly fail to comply with the very basic CITES regulations governing this trade.

Between 2016 and 2018, SA and China were listed among the top five countries for wildlife trafficking seizures.

The DEFF encourages trade in wild animals and their body parts without scientific evidence and without properly assessing the impact this may have on free-ranging populations of wild animals, the report says. DEFF says its trade in wildlife is regulated, “but this does not accord with our observations”.

Nearly all exported primates are not bred in captivity; they are wild-caught and illegally traded out of Africa and Indonesia. 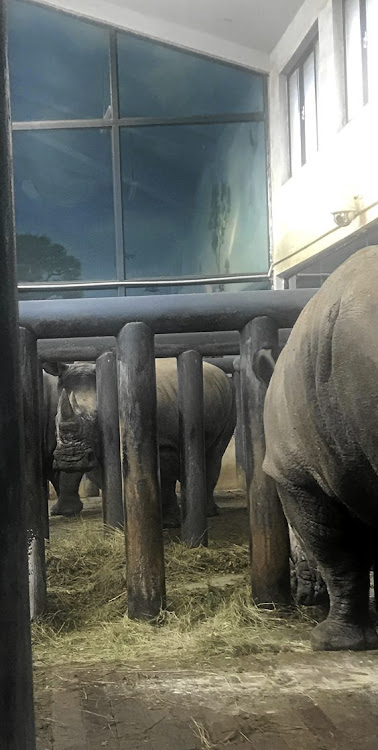 False declarations by traders, agents and exporters are common yet not a single offender has been prosecuted.

The origin of any given animal is almost impossible to trace. Once animals leave SA it is similarly impossible to identify where they end up. Many destinations are “pure fiction”.

The source of so-called captive-bred animals is not checked or properly verified.

The name of the importer on the permit is very often not the actual destination or address that the exported animals will be sent to.

The idea of “well-regulated” markets is a myth, a smokescreen behind which deeply embedded interests exploit wild animals for purely commercial gain.

It is extremely difficult to identify the source of baby animals arriving in China from Africa.

CITES members are using zoos as a shield to absolve themselves of any responsibility for animal welfare. Far from being places of care and safety, “zoos are places of stress-inducing confinement and captivity and there is no conservation-education value to the use of wild animals”.

CITES as an international treaty is “weak, untenable, impracticable, unfeasible and irreparable”. 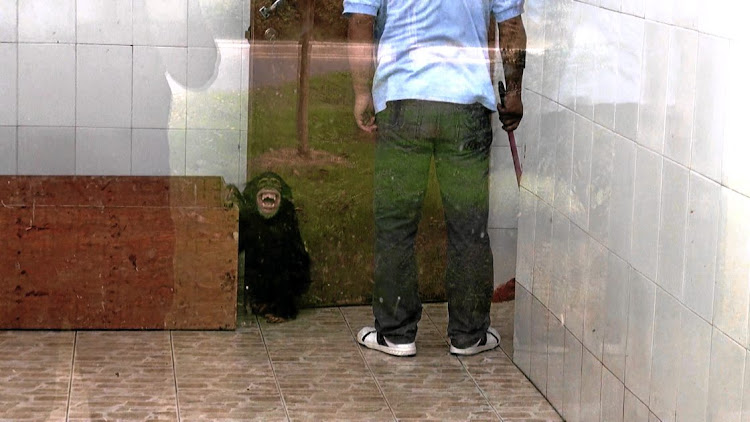 A young chimpanzee is threatened by its keeper. Image: Karl Ammann

The research found that, between 2015 and 2019, at least 32 wild species from SA were exported to China. It lists 15 exporters and 41 importers, finding questionable listed information and permit violations in many cases. Many of the animals were being used to perform in circuses and wildlife events or were going to labs for experimentation and vivisection in violation of CITES regulations.

Of particular concern was the export of CITES Appendix 1-listed chimpanzees and tigers (not indigenous to SA), cheetahs, rhinos, lions, caracal, monkeys, giraffes and unlisted species such as wild dogs, hyenas and meerkats.

The report concludes that the wildlife trade between SA and China is “massive, ever-expanding, ecologically unsustainable, damaging and closely intertwined with illegal activities”.

“South Africa’s wildlife conservation reputation is effectively in tatters because DEFF has misinterpreted section 24 of the South African constitution and is instead and expediently interpreting the notion of ‘sustainable use’ as a catch-all justification for rampant exploitation of wild animals.”

Wildlife trade between SA and China is  ‘massive, ecologically unsustainable, damaging and closely intertwined with illegal activities … SA’s conservation reputation is in tatters’

The country’s international live wildlife trade, says the report, is “large, poorly enforced, indefensible and shameful”. The report says bans should be placed on:

• Captive breeding and farming of wildlife for trade;

• The consumption of wild animals; and

It calls for a prohibition on the international commercial legal trade and sale of wild animals and their body parts and a precautionary and compassionate approach in relation to wildlife.

The NGOs recommend the crafting of a comprehensive global agreement “as a matter of extreme urgency, to tackle the dangerous, inhumane and indiscriminate trade in wild animals”.

The report is part of larger research into the wildlife trade, which will include Vietnam, Thailand, Pakistan and Bangladesh. In view of the Covid-19 pandemic, however, it was decided to release the China section ahead of the final publication.

Francisco Pérez, a CITES communications officer, responded to the report: “We will review the report carefully and will not hesitate to take up any serious breaches of the Convention with the States concerned or bring matters to the attention of the CITES standing committee if required.”

The DEFF did not respond when approached for comment.