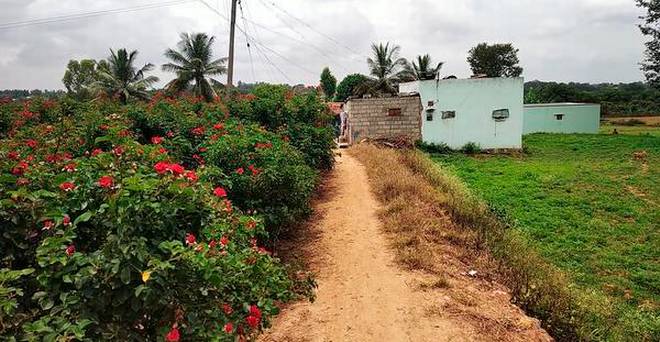 Enabling crime: About 8 km from Thally, the house of Nanjachari, the key gun maker, nestles on a slope. Image: As originally published by The Hindu.

It was smack bang during the lockdown due to the second wave of COVID-19 this June that young TNPS (Tamil Nadu Police Service) officer K. Kiruthikaa took charge as the Deputy Superintendent of Police in Denkanikottai, Krishnagiri district.

In three days, with the help of her boss, Superintendent of Police, Krishnagiri district, E. Sai Charan Tejaswi, she put together a plan to tackle a major issue in the area. Ms. Kiruthikaa’s father, a retired Indian Forest Service officer, helped her, by cajoling the Hosur Forest Department to join the task.

Ms. Kiruthikaa and her boss were concerned about the number of murders using guns in the Hosur area, specifically in Denkanikottai, Thally, Anchetty and Kelamangalam. They could not understand how the gun culture had come about in these remote villages lining the Eastern Ghats.

“As I made enquiries, it became clear that pretty much everyone in these areas possessed a gun,” said Ms. Kiruthikaa. “These are locally made weapons. Many villagers poach wildlife — deer or kaattu panni [wild pigs]. But the main reason these guns exist is elephant poaching — for the tusks,” she said.

The first job was to get a tandora (public announcement) out across these villages. Beating drums, the local thalaiyari shouted out the warning. “Whoever has an illegal weapon, must deposit them either today or tomorrow, at the village centre or at the panchayat office. If you do this voluntarily, no case will be filed against you. But if the police find illegal weapons in your possession, cases will be filed,” they announced in Tamil, Kannada and the local dialects. The deadline for surrendering guns was two weeks.

Meanwhile, the district police and the Forest Department worked feverishly to identify key persons involved in the manufacture and transport of illegal rifles. Three gun manufacturers were identified — Nanjachari from Unisenatham village near Thally, Krishnamachari alias Krishnan and another Krishnamachari from Denkanikottai and Anchetty. Three gunpowder manufacturers too were put under surveillance — one each from Denkanikottai, Anchetty and Kelamangalam.

Two weeks after the first tandora, on July 19, 20 and 21, five special teams comprising six police and forest personnel each, swung into action, and conducted day and night simultaneous raids to ensure no one escaped

Thirty-eight live firing guns — single-barrel loaded guns — were seized from 21 peopel who were arrested. Twelve rifles were surrendered, although these were largely not in working order. The two Krishnamacharis were picked up.

But, the key gun maker, Nanjachari, had fled.

Three special teams were then formed to track him down. Local lore has it that Nanjachari has been making guns since he was 13. There are rumours that he has helped the forest brigand, Veerappan’s gang, by repairing weapons, something his family denies stoutly.

About 8 km away from Thally, Nanjachari’s home nestles on a slope, surrounded by a rose farm on one side and with large tracts of grazing land on the other. The entrance to his modest home is a cowshed. Behind it is Nanjachari’s workshop, once with lathe and foundry machines. The police removed the lathe during the raids.

By the time the police landed up at Nanjachari’s house, the 65 year old had fled with his driver Upendra alias Uppi and the gun-maker’s younger brother, Jayaraman. They arrested Nanjachari’s son Lokesh, a relative Venkatraj and a helper, Imran. “We recovered 24 items used for making guns from his residence,” said Sub-Inspector M. Karthikeyan of the Thally police station. “We also found 14 machines that were used in the gun-making process,” he said.

Nanjachari was finally arrested deep in the Bannerghatta forests in Karnataka, after weeks of old-fashioned tracking, since the gun-maker did not use a cell phone. He was camping there with Uppi, when the special team surprised them. He was remanded, found to be ill with severe lung ailments, and is now out on bail.

“The police have foisted false cases on us,” says Lokesh, who is also out on bail. “Our profession is to create swings for deities in temples. We do not know anything about guns,” he said.

In the past year, official sources say that three instances of tusks being smuggled into Karnataka near the Hosur border have been recorded. The smugglers are invariably from Denkanikottai, Anchetty or Thally. The Hosur district forest officials, however, have not made any arrests or seizures.

“The problem is complex due to the migratory nature of the elephants and also jurisdictional issues,” said K. Karthikeyani, District Forest Officer, Hosur. “We are hoping that these raids will help bring the number of weapons down and prevent poaching,” she added.

By the end of July, over 80 illegal guns had been recovered across Salem, Namakkal, Dharmapuri and Krishnagiri districts. More tandoras and raids have been planned in Hosur in the near future. Elephants migrate between Karnataka and Tamil Nadu via Hosur from October to February every year. If the Hosur police and forest officials manage to break the illegal gun network’s back, the jumbos can migrate in peace.