By NewsroomFebruary 13, 2020Conservation, Education
No Comments

DURBAN: Two matric pupils who became pals over an exclusive black rhino sighting at the Hluhluwe-Imfolozi Game Reserve last year plan to spread the message of conservation to others.

Kerkhof and Zungu have recruited the very speakers that impressed them on a Jonny Lowe Memorial Trust youth excursion they were selected to attend last year with pupils from a handful of other schools.

Kerkhof recalled how, while on the excursion, teachers suggested the Grade 11s be absolutely quiet during one of many game drives.

“It was a big adjustment. Normally you speak about what you see,” he said.

“Thug Haines and Dr Peter Ardington (two of next weekend’s speakers) were in a vehicle in front of ours. It stopped suddenly and reversed.

“This ‘Hillcrest guy’ and I saw a black rhino 50m away in the thick bush. I suddenly said ‘black rhino’ and got moaned at.” 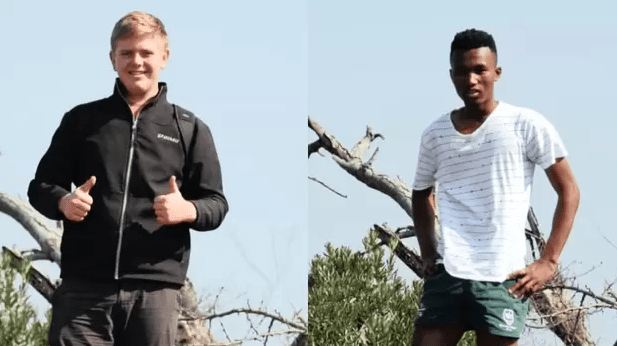 Original photo as published by The Independent Online: A meeting of ideas while on a school conservation trip spurred Glenwood High School’s Makaira Kerkhof and Hillcrest High School’s Andile Zungu to organise a joint open day to spread the message of conservation. Picture: Supplied

Back at camp they discovered that they were the only two in the fleet of vehicles who had spotted the critically endangered animal and the “Glenwood guy” and the “Hillcrest guy” formed a bond.

“The vehicle ahead had reversed because Haines and Ardington wanted to see a flower, a Mexican Poppy.”

The Mexican Poppy is an alien but naturalised noxious weed with a status quite the opposite to that of the rhino.

“Andile and I then got chatting about how we wanted to organise something to spread the message of conservation,” said Kerkhof.

Zungu recalled: “Those professionals were all passionate about the environment. They pointed out to us that it was important to be ambitious and to change the world. I would like to encourage people our age to do that.”

Ardington, a wildlife vet and soil scientist, and Haines, a specialist on legalising the horn trade for rhino survival, will be joined by John Forrest, former head of Hluhluwe-Imfolozi, and Cath Jakins on canned lions.

The event will be from 8.30am to 3.30pm. Attendance will cost R20 for pupils in uniform and R50 for adults. Proceeds will go to the causes linked to the speakers.