By NewsroomMarch 7, 2020Science and technology
No Comments

Scientists and researchers have recorded a breakthrough following a successful birth of two cheetah cubs by a surrogate mother through In Vitro Fertilisation (IVF).

The first-ever scientific reproduction of cheetahs happened at a Columbian zoo, a breakthrough marked after more than 15 years of research.

According to a statement released by the Colombus Zoo and Aquarium, the achievement could ensure survival of cheetahs in their native ranges in Africa.

“These two cubs may be tiny, but they represent a huge accomplishment, with expert biologists and zoologists working together to create this scientific marvel,” the zoo said in a statement. 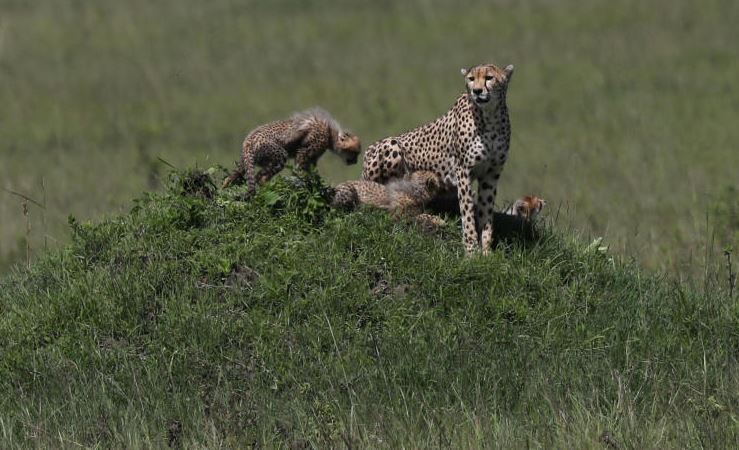 Original photo as published by Standard Media: A female cheetah and her seven cubs roam the savanna of Maasai Mara National Park in Southern Kenya. [Reuters]

Conservation scientists, the zoo said, have been doing researches to boost the number of cheetahs which, according to the International Union of Conservation and Nature, are listed as vulnerable with decreasing population trend in their native ranges. The two cubs were born on February 19.

The procedure to birthing the two cubs involved fertilisation of sperm and eggs in a laboratory and then incubated to create embryos. The embryos were implanted into the surrogate mother’s womb, where they developed into foetuses.

The breakthrough on the scientific reproductive techniques on cheetahs come in the wake of the assisted reproduction techniques being tried on the critically endangered northern white rhinos in Kenya.

On scientific milestones to assist in reproduction of northern white rhino, three embryos have been created successfully to be implanted on a surrogate mother at Ol Pejeta conservancy in Laikipia.

The ground-breaking of procedure on the northern white rhinos was marked in 2019 when a team of scientists and conservationists successfully harvested the eggs from the two remaining female, artificially inseminated them using frozen sperm from deceased males and created three viable northern white rhino embryos.

Last January the scientists noted that there was a significant increase in the chances of successfully producing offspring. The procedure also proved to be safe and reproducible, and can be performed on a regular basis before the animals become too old.

Currently, there are plans to select a group of female southern white rhinos at Ol Pejeta Conservancy, which could serve as surrogate mother for the northern white rhino embryo.

This is also expected to be a success, with the first attempt set to be crucial since it has never been achieved before. It is expected that implantation will be undertaken any time this year.

And while the incorporation of scientific technologies in conservation has been on the rise, the breakthroughs shine light in race against extinction.

Scientists estimate that the cheetah population has declined to approximately 7,500.