By NewsroomNovember 9, 2019Anti-poaching, Science and technology
No Comments

Scientists have developed a fake rhino horn using horsehair, in a bid to create “credible fakes” to flood the market and reduce demand for the material.

Researchers from the University of Oxford created the synthetic horn by bundling horse hairs, gluing them together with a matrix of regenerated silk to mimic the collagenous properties of authentic rhino horn.

Rhinos are often poached for their horn, which buyers believe can cure health problems from hangovers to cancer.

Persistent poaching and habitat loss has led to a decline in the world’s rhino population — according to conservation organization Save the Rhino, 892 of the animals were killed in Africa in 2018.

According to the World Wide Fund for Nature (WWF), there are an estimated 20,000 white rhinos, 5,000 black rhinos and 3,500 greater one-horn rhinos left alive. There are believed to be fewer than 80 Sumatran rhinos, and fewer than 68 Javan rhinos — both considered to be critically endangered species.

The international trade in rhino horn has been banned since 1977, regulated by the Convention on International Trade of Endangered Species of Wild Fauna and Flora (CITES), but individual countries determine their own laws that allow or prohibit its sale domestically, according to Save the Rhino. 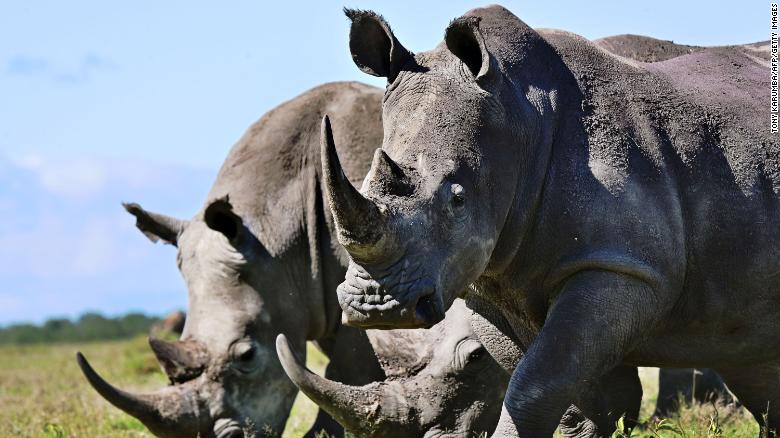 Original photo as published by Edition.cnn.com: Rhinos are often poached for their horn, which some buyers believe can cure health problems.

In research published Friday in the journal Scientific Reports, the Oxford scientists said they were able to fabricate samples that looked and felt like real rhino horn — something they hope will allow for “credible fakes” to flood the market, confusing consumers and diminishing demand for the product.

Researchers said analytical studies showed the fake horsehair horn demonstrated similar composition and properties to natural horn, which grows from a tightly packed tuft of hair on the animal’s nose.

‘It appears from our investigation that it is rather easy as well as cheap to make a bio-inspired hornlike material that mimics the rhino’s extravagantly expensive tuft of nose hair,” co-lead author Professor Fritz Vollrath, from the University of Oxford’s Department of Zoology, said in a statement.

“We leave it to others to develop this technology further with the aim to confuse the trade, depress prices and thus support rhino conservation,” he added.

Vollrath told CNN that by demonstrating how easily fake rhino horn can be created, he hoped potential consumers would think twice about buying rhino horn for huge sums.

“What I am hoping is that the story gets out that rhino horn is not some magical substance — it is hair, glued together with sticky stuff that comes out of the nose. It’s nothing special, nothing magical,” Vollrath told CNN.

However, the research has met with skepticism from conservationists.

WWF told CNN that it did not believe the marketing of fake or synthetic horn would reduce levels of rhino poaching.

“One of the known characteristics of the Asian consumer markets since the poaching crisis erupted in 2007 has been the high quantity of fake horn in circulation,” a WWF spokesperson told CNN in a statement.

“In spite of this rhino poaching levels have risen relentlessly, because many buyers still prefer the real product and will take some trouble to acquire it from sources they deem trustworthy.”

“A number of developers are working on creating a synthetic product, which, it is claimed, would be ‘biologically identical’ to real horn. This raises the obvious question as to how enforcement personnel could tell the two products apart, especially if they are both marketed as powder or as an ingredient in other medicinal or manufactured products,” the spokesperson said.

Cathy Dean, CEO of Save the Rhino, told CNN that flooding the market with fake product would hamper law enforcement efforts to clamp down on the trade in rhino horn.

“If you catch somebody who is trafficking a real rhino horn, they could plead a line of defense that they thought they were carrying a horsehair horn — it would make the whole prosecution process very, very difficult,” Dean told CNN.

“The main driver of the poaching prices is very wealthy businessmen willing to splash out large sums of money to buy a whole horn which they would then display,” Dean said.

“They want the real thing, they want to demonstrate that they have the power, the wealth, the connections to be able to buy this illicit product,” she added.