By NewsroomOctober 5, 2021Conservation
No Comments 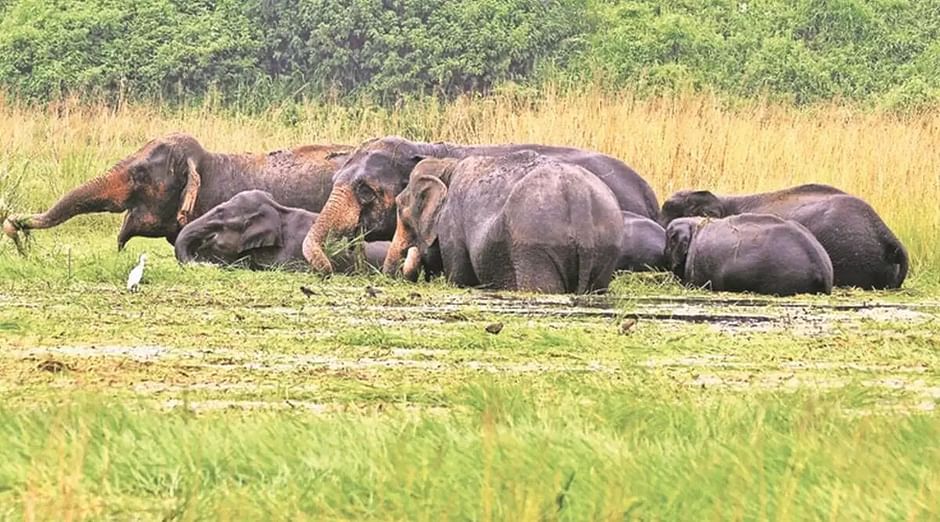 Saving the elephant corridors. Image: As originally published in The Sentinel.

The Ministry of Environment, Forest, and Climate Change embarking on a project for the identification of ground-truthing of elephant corridors is a laudable initiative. The project is expected to provide solutions to the rising incidence of human-elephant conflicts in Assam and other states. Ensuring legal protection to elephant reserves and corridors will be crucial for securing the habitat of elephants. Even though there are 30 elephant reserves in the country covering an area of 65,000 square kilometres, the Ministry has found that 80% of the elephants are ranging outside the notified areas. As most elephants are ranging in corridors outside the reserves the conflict with human takes place. The project to be implemented in all areas with elephant population seeks to rationalise the boundaries of elephant reserves through identification of the corridors based on parameters finalised by a committee constituted by the Ministry.

State Forest Department officials will be trained on the identification and ground-truthing of the corridors using these parameters. The project has great significance for Assam with over 800 human lives lost over the past ten years in human-elephant conflict. The Udalguri district accounted for the highest casualty of 115, followed by Sonitpur with 103 deaths. Goalpara district, which is frequently hitting the headline for human-elephant conflict, accounted for 74 deaths, while Darrang district accounted for 51 deaths which are also indicative of the conflict reaching a flashpoint in several districts. During this period more than 350 elephants were also killed due to electrocution, poaching, poisoning, accidents and mowed by speeding trains. Herds of wild elephants coming out of degraded forests and fragmented corridors in search of food and raiding paddy fields and other cropped areas, destroying houses have become a common and frequent occurrence in the state. The mitigation measures initiated by the Environment and Forest department include the formation of elephant depredation squads, but it has hardly worked to produce any significant result. Construction of highways, laying of railway tracks led to fragmentation of elephant habitat and corridors which often results in trains mowing down elephants. Recurrence of incidents of speeding trains killing elephants on a railway track passing through Deepor Beel, a Ramsar Site on the outskirts of Guwahati city is a glaring example of development activities fragmenting elephant habitat adding to the conflict. The Wildlife Institute of India suggested two alternatives as mitigation measures to prevent elephant-train collision along the track passing through the wetland- realignment of the track from Azara station to the level-crossing near Assam Engineering College, or the construction of a tunnel under the hilly stretch.

The Northeast Frontier Railway Authorities have found both the measures unfeasible citing financial and technical reasons. This speaks volumes about the complexities in mitigating the conflict once an elephant corridor is fragmented due to human activities. Assam has notified five elephant reserves under the Project Elephant but indiscriminate coal mining by Coal India Limited without prior approval of the National Board of Wildlife as well as illegal rat-hole mining led to the destruction of vast areas of elephant habitat in the Dehing Patkai Elephant Reserve. It also brought to light that these elephant reserves were merely notified under administrative orders and has no legal protection. Lessons need to be learnt from the Dehing Patkai episode as well as human-elephant conflicts in the vicinity of oil installations in the state that rationalising the elephant reserve boundaries after identification of the corridors used by wild elephants will help mitigation of the conflict only if identified corridors and reserves are backed by legal protection on the lines of national parks. With the Central Government laying thrusts on increasing domestic production of coal and other fossil fuels to cut down the import bill there will be mounting pressure from the mining lobby which the State Forest Department, as well as the Ministry, will have to withstand secure elephant habitats. The elephant population in Assam increased from 5,246 to 5,719 and the conflict will be difficult to manage if immediate measures are not taken for protecting elephant corridors and restoring the fragmented ones.

The State government undertaking a review of its development projects to find out if they pose any threat of disturbing or fragmenting an elephant corridor can supplement the efforts by the Ministry in identification and security of the corridors.

Lack of convergence of the Ministry’s project and various development projects of the State government may lead to identified corridors remaining on paper and not producing any impact on human-elephant conflict. Conservation and protection of the elephant habitats are important not just for the conservation of wild elephants but also to prevent the loss of human lives. Assam government can take the lead by announcing its commitment to support the Ministry’s project and provide legal protection to identified elephant corridors as part of its celebration of the weeklong wildlife week.